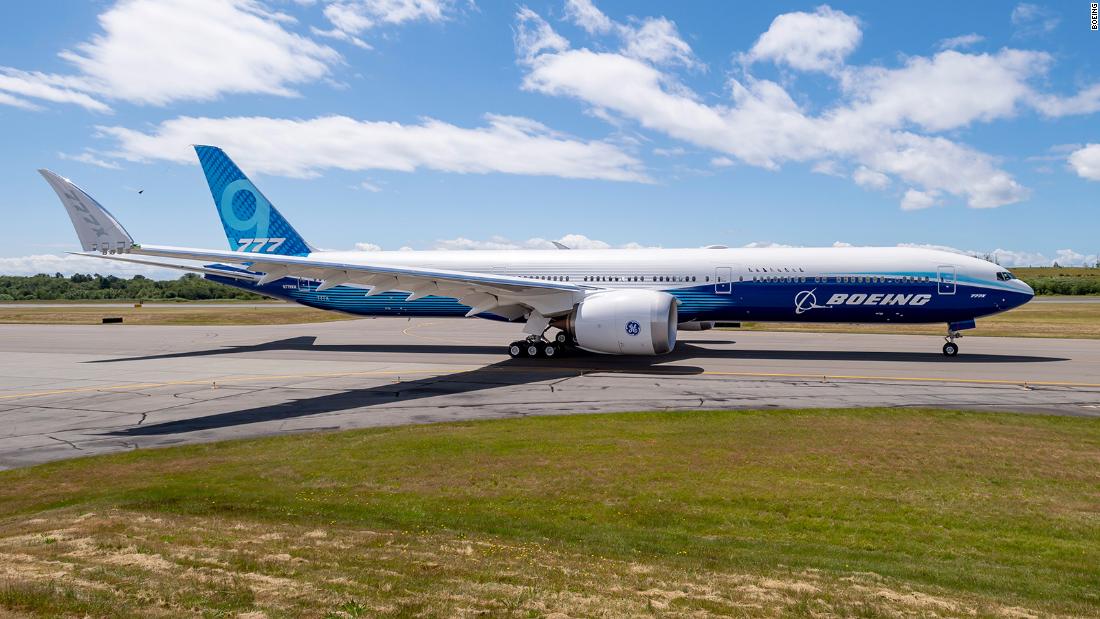 (CNN) — The Boeing 777X, described as “the world’s largest and most efficient twin-engine jet”, was originally scheduled to enter service in 2020, but the jet’s launch has been plagued by delays.

The most striking appearance of the aircraft, now expected to debut in 2025, is undoubtedly its folding wingtips – a first for commercial aviation.

But what does it look like inside? This month Boeing proudly presented a test version of the 777-9X, one of two 777X variants, at the Farnborough Airshow, a UK-based aviation trade event, which gives an idea of ​​what passengers can expect.

The 777 has been a huge success for Boeing since its launch in 1995 and remains the best-selling widebody aircraft. Following on from the popular but outdated 777-300ER, the 777X looks set to become one of the aircraft manufacturer’s flagship aircraft.

One of the most striking things about the experimental aircraft, other than being filled with surveillance equipment, is how large it is.

Visitors aboard the 777-9X, a test version of Boeing’s 777X, during the UK’s Farnborough Airshow.

In the demonstration aircraft, much of the cabin space is currently occupied by test stations, along with huge water tanks used to balance the aircraft during test conditions.

Although the aircraft has the same external width as the 777, the sidewalls are thinner, so there is enough room for 10 18-inch wide economy seats.

Then there are the windows. Not only are they approximately 16% larger than those on the 777, they are also installed higher on the fuselage to provide passengers with more natural light and visibility.

No overhead bins were seen in the 777-9X demonstrator, but Boeing has stated that those onboard can hold twice as much as normal bins and require 40% less force to close.

According to Boeing, the best features of the 777 and 787 Dreamliner families have been brought together for the 777X, with additional improvements, and the similarities are clear.

“It has the same passenger characteristics as the Dreamliner,” explains Julie O’Donnell of the Boeing Commercial Airplanes Communications team. “So the LED lighting and the better humidity.”

Like the Dreamliner, the 777X can maintain a lower cabin height of 6,000 feet, which “helps with fatigue,” a test team member tells CNN Travel during a tour of the plane, along with improved technology to “counteract turbulence.”

The 775,000-pound aircraft is equipped with General Electric GE9X engines, the most powerful engines ever mounted on a commercial passenger jet. These consume 10% less fuel than the current 777s.

In the cockpit, the cockpit screen includes touchscreen displays that can support multiple touch points, allowing two pilots to interact with their portion of the lower screen simultaneously.

James Hanley, one of the test pilots aboard the plane, praised the “modern” system, indicating that it has been a bull’s eye among pilots.

One of the many controls inside is used to operate the plane’s folding wings, which have a wingspan of just over 233 feet (71 meters).

The carbon fiber reinforced polymer wings were: specially designed so that the plane fits in the same gates, taxiways and runways as the 777.

While this design feature is not uncommon on Navy jets built to land on an aircraft carrier, this marks the first time folding wingtips have been fitted to a commercial passenger jet.

The plane’s folding wingtips are a first for commercial aviation.

As a result, the US Federal Aviation Administration has issued new regulations for the 777-9X and 777-8X, its sister aircraft.

The 777-9 has undergone “rigorous” flight testing, both on the ground and in the air, and is making good progress, the test team said.

The plane made its first flight back in January 2020 and has now logged more than 2,400 flight hours.

It wasn’t just part of the static display at the first Farnborough Airshow to be held since 2019.

Those in attendance were treated to a spectacular air show with the plane flying at a near vertical angle before performing some impressive maneuvers, much to the delight of the crowd below.

The plane is now back at Boeing Field in Seattle and has “resumed regular operations”.

This latest standout comes months after Boeing announced delivery had been delayed until 2025 due to “an updated assessment of the time needed to meet certification requirements.”

The plane soars through the air during a demonstration flight at the Farnborough Airshow.

Boeing has received approximately 376 orders for the 777X.

Qatar Airways will be the first airline to take delivery of the plane, said Chief Executive Officer Akbar Al Baker, who told reporters at the Farnborough Airshow that he was considering placing a “larger order”.

Qatar’s flag carrier completed an order for 25 Boeing 737 MAX 10 aircraft, while Delta Air Lines announced it plans to buy 100 of the largest variant of Boeing’s 737 Max, which was also on display at the space event.
In March 2019, the MAX grounded for 20 months after two fatal accidents. This was lifted in November 2020 after software updates and revised pilot training. Stan Deal, CEO of Boeing Commercial Airplanes, says the aerospace company has received “strong demand” for the MAX since it returned to the skies.

Tags: tripWhat It's Like Inside Boeing's New 777X - CNN
ShareTweet