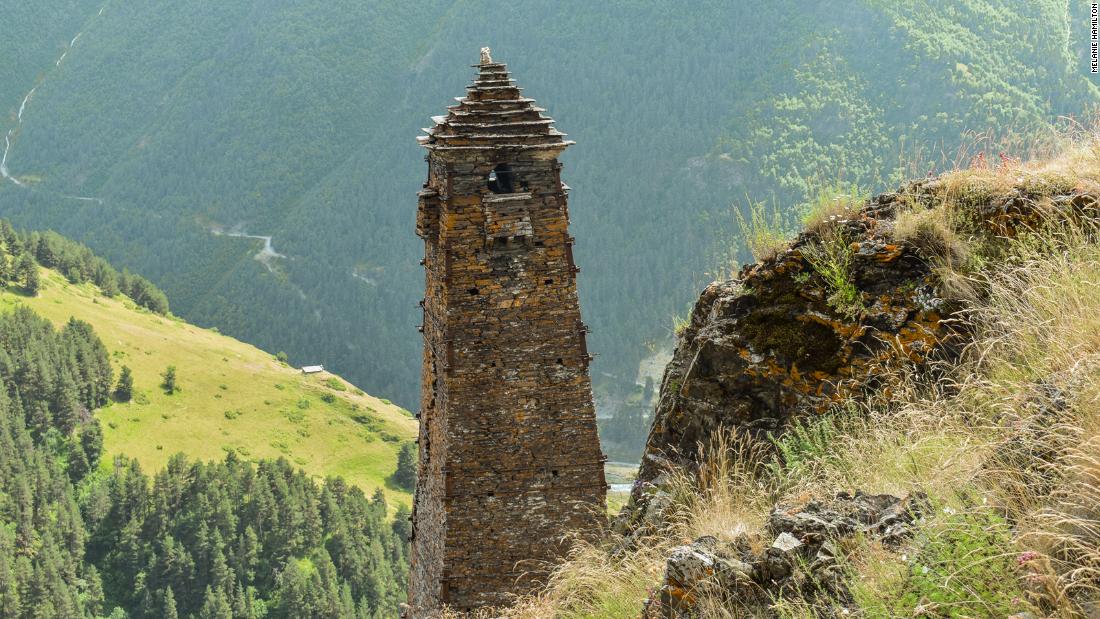 Tusheti: a wild and remote area on the edge of Europe

(CNN) — A small wooden hut with smoke coming from the chimney stands at the foot of a windswept hill dotted with lambs. Inside is a large iron cauldron, planed by centuries of use and smothered in flames. As the inside bubbles, mountain barley and wild hops combine to create a deliciously sweet, sour and cloudy beer known as allude to.

Surrounding the cauldron is a group of men who have stood in this hut on this day every year for as long as they can remember. At the helm of all this is a specially chosen shulta who oversees the sacred process. Brewing aludi together is part of their unofficial brotherhood and a sacred preparation for the coming festival.

Soon this special brew will be used to mark the start of Atnigenobaa two-week festival in the northeastern Georgian region of Tusheti full of pagan ram sacrifices, shrine worship, folk dancing and fiercely competitive horse racing.

Tusheti, tucked deep in the mountains that separate Georgia from its Chechen and Dagestani neighbors, is accessible only by a long, narrow dirt road that climbs 3,000 feet above the gorges below.

It is a wild, untamed treasure hidden on the borders of Europe.

The tourist season, ravaged by heavy snowfall during long winters, is short, with the region only accessible around 4-5 months of the year, but is a haven for hikers looking to map out new territory.

Tusheti is characterized by its breathtaking scenery and enduring folk traditions, especially in the field of art. The strong history of shepherding means that woolen textiles predominate, especially cozy knitted house slippers and elaborate rugs in bold geometric patterns.

In October, there are only a handful of locals left in Tusheti. Prepared for a long and harsh winter, they are completely cut off from the outside world, completely stranded in the wilderness. Irakli Khvedaguridze is the only licensed doctor in the region who, at the age of 80, relies solely on his wits, his horse and a reliable pair of homemade skis to meet medical needs all year round.

It’s not just the locals who make a mass exodus every fall. Long before the road to Tusheti was built in the 1980s, the only way in or out was on foot or horseback – a reality local herders have known for centuries.

As winter approaches, herds of tens of thousands of sheep led by lowland herders begin their journey south, where they will graze over sunny plains during the colder months. And with the first thaw of spring, they embark on the annual odyssey back to their homeland.

Shepherding is not only a primary source of income for Tushetian men, it is also a way of connecting with their land and heritage. As more and more Tushetians trade the peaceful yet primitive mountain lifestyle for more modern options in the Georgian capital of Tbilisi and beyond, traditional professions such as shepherding have become a point of pride.

Omalo is located in the heart of the region. Crowned by the Keselo fortress and scattered among pastures dotted with horses, quaint guest houses and the occasional screeching rooster, Omalo is the designated gateway to Tusheti.

It’s also here that many wilderness-starved hikers set out to complete one of Georgia’s most famous multi-day treks: Omalo to Shatili, a fortified medieval village deep in the Arghuni Gorge. The five-day trek connects Tusheti with neighboring Khevsureti, another isolated highland area and medieval treasury, via an ancient shepherd’s trail.

Dartlo flows out of the Pirikiti Valley on the banks of the Alazani River. Not far from Omalo, this slow and sleepy old hamlet is characterized by its defensive towers and perfectly stacked stone houses. On the edge of the village is a shroud of church ruins with shrubbery bursting out of the sandstone, and the cream facade returning to the nature it came from.

In a small clearing behind the ruins is a strange looking set of stones; arranged in a semicircle of 12, with another two in the middle, resembling a micro version of the prehistoric Ring of Brodgar is actually a 15th century courthouse.

Known as Sabtcheo, this traditional court was where accused criminals would be tried – their sentences often drove them out of the village, banished to the Tusheti wilderness. The village of Kvavlo, stranded on the slopes above Dartlo, makes for an excellent (albeit steep) afternoon walk.

The village of Dartlo.

Shenako sits on rolling green pastures with lazily grazing herds of cattle and simple houses with ornate wooden balconies. Towering over the small village is St. George’s Church, a detail that would be easily overlooked in the lowlands but not in Tusheti. In a region where stone shrines outnumber hundreds of churches, St. George’s feels like a rare relic.

Accessible from Shenako via a winding dirt road or an overgrown footpath through the dense forests spread over a mountain or two, is Diklo. Just a few peaks from Russia’s Dagestan region, the ruins of the hilltop village overlook a handful of shrines, lone shepherds’ huts and houses dotted throughout the landscape.

The very last house has a shredded rosy-cheeked woman known locally as Masho Bebo (Grandma Masho) who puts fresh chunks of cheese on the rafters of her balcony to ripen. Dancing in the wind is a collection of colorful wool socks, hand-knitted by Masho Bebo as a memento for weary walkers who pass through the village.

Tushetian traditions and culture have been shaped by its extreme isolation and ancient superstitions. Undoubtedly, nothing is more representative of Tushetian culture than the countless khati (stone shrines) and salotsavi (sacred spaces) scattered across the landscape. Carefully laid stone piles decorated with animal skulls and long, curled bovine horns can be found almost everywhere. Some allow women, many do not, but all are revered for the deity they symbolize.

Tusheti walks the line between Orthodox Christian and local pagan traditions with a pronounced emphasis on the deceased. By the end of August every year Mariamoba — a holiday dedicated to both Saint Mary and deceased loved ones. It is a time to set the table for those who are no longer around, both in the recent and the distant past.

A few months later, in December, those brave enough to stick around will gather to celebrate Fishing, the solstice and the precious winter silence that will lead them to a fruitful spring. Warmed only by their fiery hearths and crackling wood-fired ovens, women in Tusheti prepare ritual cakes and breads such as when and machkatic that will serve as offerings to a hodgepodge of ancient gods, Orthodox saints, and departed ancestors. A single dish of khatvisi (a traditional shepherd’s dish of boiled curd and butter), combined with a chalice of aludi, a few machkatic and a lighted candle should be placed in the window that catches the first rays of the sun.

Though often forgotten, Kdinic in January, goblins and devils wreak havoc. Not unlike Halloween and Day of the Dead, Kdinic is a time when the veil between worlds is thinning. But instead of making jack-o-lanterns or making colorful offerings, some locals go to the forest for sminaoba where they eagerly listen to familiar voices trying to contact them from outside.

Harsh winters and a secluded existence have created a local cuisine built around pastoral dairy, warming soups, hearty meats and buttery bread stuffed with salty cheese or creamy potatoes. Although there are very few restaurants, bars and cafes, local guest houses are usually happy to prepare a list of favorites for their travelers.

In Guesthouse Gere — a charming wooden homestay along a lonely dirt track in Omalo — two women in aprons are hard at work; despite the chilly temperatures, they sweat.

One of the women rolls out dough into palm-sized disks with an old glass bottle the same color as the emerald-green garden the house overlooks. The other carefully stacks the discs with freshly split mutton before quickly tucking their edges together into perfect folds.

Just an elbow’s length away, a large bubbling pot is ready to receive them by the dozen – it’s kitchen tango. Though much simpler in ingredients than its lowland counterpart, Tushetian khinkali dumplings are just as tasty; especially washed down with a sip chachaa powerful Georgian spirit made from the leftover pulp from winemaking.

Other Tushetian staples include: kotoria thinner version of khachapuric filled with spicy cheese curds and a generous amount of butterfat; khavtisic, a dish of cooked curd and butter, also known as Tushetian fondue; and only, a cheese that is not named after Gouda, but after the sheepskin bag in which it was matured. A favorite of shepherds is khaghilong strips of meat (often sheep, goat or game) that have been carefully cured and sun-dried to create what can only be described as Tushetian jerky.

Despite Georgia’s long history of winemaking, in Tusheti it is beer that seems to be a local novelty. Brewed from mountain barley and wild hops, allude to is wonderfully sour and sweet and takes on a hazy orange hue.

Everything in Tusheti is rooted in tradition, and allude to is no exception. While tourists can sip it casually, for Tushetians the beer is sacred – ever present during rituals, holidays, festivals, funerals and so on. All said and done, nothing warms the soul like a mug condor chaia local tea brewed from wild thyme or summer herbs – sometimes both.

Tags: tripTusheti: a wild and remote region on the edge of Europe - CNN
ShareTweet

Cruise Ship Butler Will Even 'Rearrange Furniture' For VIPs