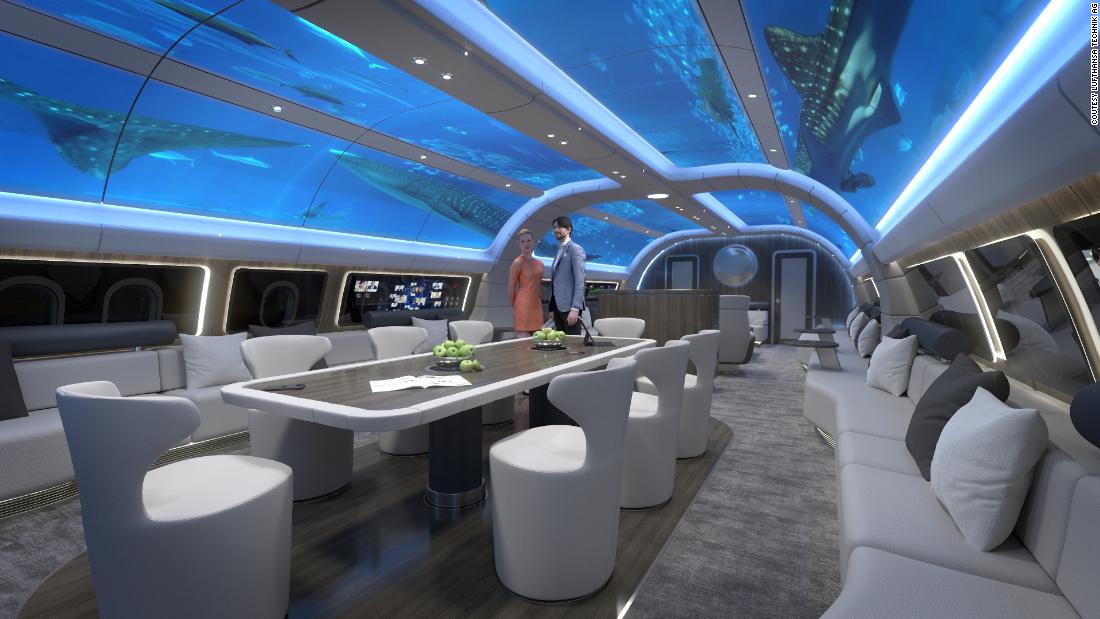 Transforming an A330 into a yacht-like luxury experience

Editor’s Note — Monthly Ticket is a CNN Travel series that highlights some of the most fascinating topics in the world of travel. In June, we’ll take to the skies to check out the latest advances in aircraft interiors, including the people working to change the way we fly.

(CNN) — The fact that the mega-rich go to great lengths to adapt their private jets to their lifestyle is not new.

And we’re not just talking about your average business jet. For decades, world leaders, royalty and billionaires have furnished the types of aircraft most of us fly commercially, made by the likes of Airbus and Boeing.

But the options on the table are getting wilder.

One of the leaders in the customization game is Germany’s Lufthansa Technik, who recently developed a cabin concept inspired by another must-have item for the wealthy: the superyacht.

According to the company, the EXPLORER wide-body VIP cabin concept fulfills two wishes of aircraft owners: to take their aircraft with them almost anywhere and anytime, while also serving as a base camp when they travel – a place to sleep and also enjoy leisure time activities and excursions.

The Lufthansa Technik team chose the Airbus A330 to demonstrate the concept and has released a series of renderings demonstrating its capabilities.

These include the usual must-haves such as bedrooms, bathrooms, bars and dining areas. But the highlight is arguably the retractable veranda – a floor in the forward fuselage that extends outwards when the plane is parked, at a height of about four meters above the apron.

Coming in close second is a large-scale integrated virtual content projection system. It extends from the window belt and reaches to the ceiling. Customers can select their own lighting and imagery using a high-tech projection system to create scenes such as green forests and starry skies.

The BRABUS Adventure Lounge: a place to store the toys.

The EXPLORER concept was first launched in November 2021 and the company recently presented a new addition at an aviation convention in Geneva in May: the BRABUS Adventure Lounge.

The concept places the lounge in the aft part of the lower deck of the A330, which can be viewed from the main deck through a glass floor.

Again, the superyacht, with its tender and toy garage, was the inspiration. A selection of vehicles can be stored in the Adventure Lounge for use after landing.

The concept includes a limited edition BRABUS 1300 R, made in collaboration with the Austrian motorcycle manufacturer KTM.

Wieland Timm, head of sales for VIP and special mission aircraft at Lufthansa Technik, tells CNN Travel via email that the lounge shows just “a striking example of what this reconnaissance aspect could look like” in flight.

“The luxury engines are staged exclusively on the accessible lower deck,” he explains. “Once they land, they can be unloaded and passengers will be given the freedom to explore the current destination in more detail.”

On why Lufthansa Technik chose the A330 for the EXPLORER concept, Timm says that this classic widebody aircraft “offers ample space for a host of new cabin ideas and also sufficient range to meet the special needs of the EXPLORER target group.” to fulfil.”

However, he notes that an EXPLORER-type interior can also be installed in other wide-body aircraft, such as the Boeing 777.

Timm says the target audience for the EXPLORER concept is “the rather ‘classic’ ultra-rich individuals who travel and explore the world in the utmost luxury and – above all – privacy, but also charter companies of such high-end luxury travel (with, for example, 14-day around-the-world travel in a price range of $100,000 to $200,000 per week).

He also says he expects some owners to take a hybrid approach.

“For example, a wealthy person who owns an EXPLORER aircraft, but only uses it one month of the year. The rest of the year, this person will also charter it to other operators/users.”

An artistic rendering of the terrace.

So far, the response has been overwhelmingly positive, he says, noting that they have already received inquiries from customers looking to implement one or more of the EXPLORER’s technical features into their current or future cab completion projects.

He notes that it is unlikely that an aircraft owner would adopt the entire concept as a whole, but given it is technically feasible, the cabin could be produced as pictured. Instead, customers are likely to adapt certain design elements to their own needs.

“The simple reason is that the VIP Completions business, especially for widebody aircraft, is highly individualized to meet the personal needs of the owner… So the vast majority of aircraft we complete for our customers are really unique.”

How close is it to that superyacht experience?

Since superyachts have much more freedom in terms of anchorage and mobility, we asked Timm how common it is for owners to spend the night on their aircraft while it is on the ground at an airport.

He says several airports will allow them to park their planes and virtually “live” there for a certain amount of time.

“Some of our customers are already using this,” he adds. “The reasons are diverse and have to do with the fact that these customers often also use the aircraft as an office space and thus receive their customers on site.

“Others prefer to stay on the plane overnight for safety reasons. In the EXPLORER use case described, however, the airport acts as a home base and starting point for further adventures/explorations.”

Tags: Transforming an A330 into a yacht-like luxury experience - CNNtrip
ShareTweet

DEAL OF THE DAY: Shorefield Holidays cuts 22 percent off UK short breaks for 2022