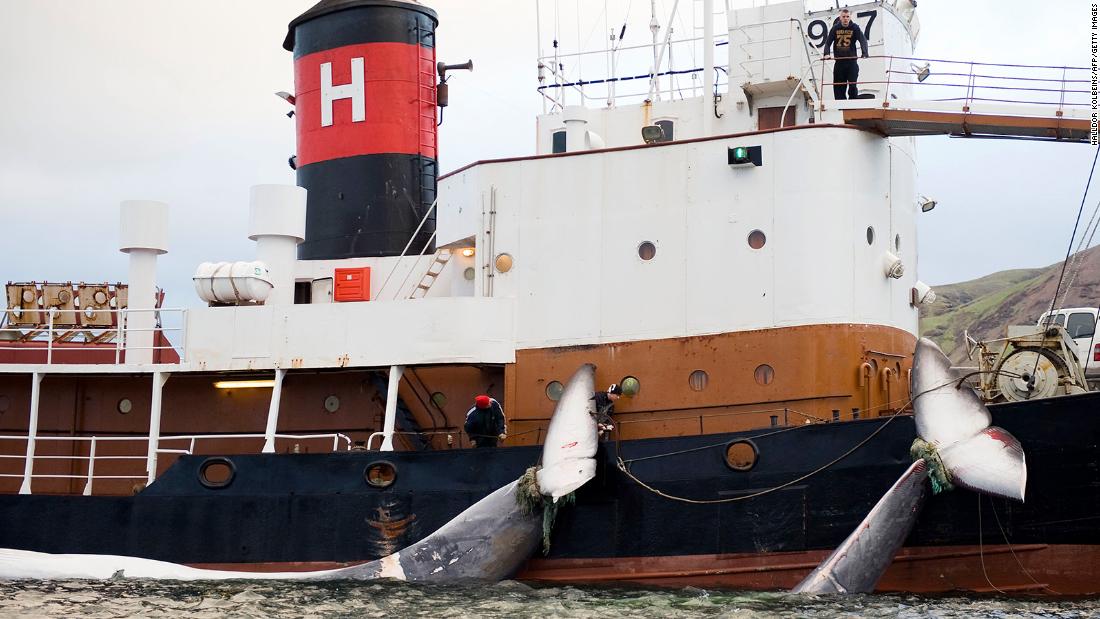 Tourists are back in Iceland. But that also applies to whale hunting

Reykjavik, Iceland (CNN) — After a four-year hiatus, Iceland’s last remaining whaling company, Hvalur hf., will resume hunting this summer, much to the chagrin of tourism officials.

As the Covid-19 pandemic had a devastating impact on Iceland’s tourism industry, whaling backlash is the last thing many tourism officials want.

“It is actually well known and widely reported that the tourism industry believes whaling is damaging Iceland’s image as a tourist destination,” said Jóhannes Þór Skúlason, the executive director of the Icelandic Tourist Board† “You just have to see how the whaling is reported in the foreign press.”

“It’s often reported in larger publications with heated coverage,” Jóhannes continued. “In the tourism industry, in private companies as well as in public polls; in letters, phone calls and other communications, whaling is having a very precise effect, and tourism companies are feeling it the moment whaling comes back into the discussion.”

Company representatives have expressed outrage over the planned whaling. “The tourism industry and most Icelandic citizens are against whaling,” said Ásberg Jónsson, CEO of Travel Connecta major travel services company based in Reykjavík.

“It is saddening and frustrating to hear that this company, Hvalur, is planning to kill these animals in Iceland again. It is very damaging to our country’s reputation. This in turn affects our export and tourism industries.”

Much is at stake as tourism in Iceland ground to a halt during the height of the Covid-19 pandemic. “We are an island, so it is clear that the barrier to travel here is slightly higher than people visiting a neighboring country,” said Sigríður Dögg Guðmundsdóttir, the head of Visit Iceland†

Whale watching is a popular tourist activity in Iceland.

Although Covid-19 wreaked havoc on countries around the world, many countries are not as dependent on tourism as Iceland is. In the run-up to the pandemic, tourism was the country’s largest export.

According to data from the Icelandic Chamber of Commerce, the sector’s growth peaked in 2017 when tourism exports accounted for 42% of the country’s total exports.

In the wake of the pandemic, GDP growth took a hit last year. Activities related to travel bookings, air transport, accommodation and restaurants decreased by 50-75% from 2019. This led to a contraction in the tourism sector by 3.9% of GDP in 2020.

Hvalur last sent his ships to hunt in the summer of 2018, and a total of 146 whales were caught during the season. Depending on the light, whale season usually starts in June and lasts until September. It is estimated that about 150 people work on the whaling boats at the whaling station in western Iceland and at the company’s processing facilities outside Reykjavík.

The tails of two 35-ton fin whales that were killed by hunters in June 2009.

Some argue that whaling is part of Icelandic culture and should be resumed.

“Whaling has a long tradition here in Iceland, and I think reasonable and controlled hunting should be allowed,” a casual worker at the whaling station, who did not want to be identified as it could affect his employment, told CNN Travel. “Only about 125-150 fin whales have been hunted a year in the seven seasons since Iceland started hunting whales again in 2006. I think only eight whales were hunted that year.”

It is a mystery to many that Hvalur, which is led by CEO Kristján Loftsson, continues to whaling in the face of environmental problems and dire financial situation.

“It’s hard for us to understand why, as whaling is not only a harmful practice, it’s no longer financially viable,” said Travel Connect’s Ásberg.

According to a 2019 report from the Icelandic Ministry of Industry and Innovation, Iceland’s whaling activities account for about 3% of all whales hunted worldwide. In 2017, the total turnover of whale watching companies was 3.2 billion Icelandic krona (26.5 million dollars). Meanwhile, Hvalur’s revenue from whaling was 1.7 billion krona ($14.1 million) in 2017.

However, whale watching brings in more income as it is a popular year-round activity for tourists.

Many are fed up with the impact of one company, especially as tourism companies expect another “pre-Covid” number of tourists to return this summer, and a controversial issue like whaling is disappointing.

“Overall, our travel brands haven’t experienced many cancellations because of this, but every now and then we get negative emails about the subject,” says Ásberg. “We always explain that as a company we don’t support whaling at all. Everyone should be able to see these incredible creatures thrive in their natural habitat.”

Tourism to Iceland was hit by Covid.

The 2022 season could be Hvalur’s last, as the current license to hunt whales expires in 2023, and the Icelandic Minister for Fisheries and Agriculture will then decide whether or not to stop issuing whale licenses from 2024. It seems that there is little demand for whale products and that the industry is doing little for the Icelandic economy.

“Any whaling in Icelandic waters is scientifically substantiated and in accordance with international law,” Sigríður said. “Hvalur has the required permit to go whaling this summer. It is up to management and owners to determine whether they will use it and to the Icelandic people and government to determine whether future permits will be granted. over the past three years, only one minke whale and no large whales have been caught.”

All Covid-19 restrictions were lifted in March 2022, and tourism managers have high hopes for a good summer.

“Tourism in Iceland is recovering well,” says Sigríður. “In our projections, we expect near-normal numbers this summer and a full return next year.”

Tags: Tourists are back in Iceland. But so is whaling - CNNtrip
ShareTweet