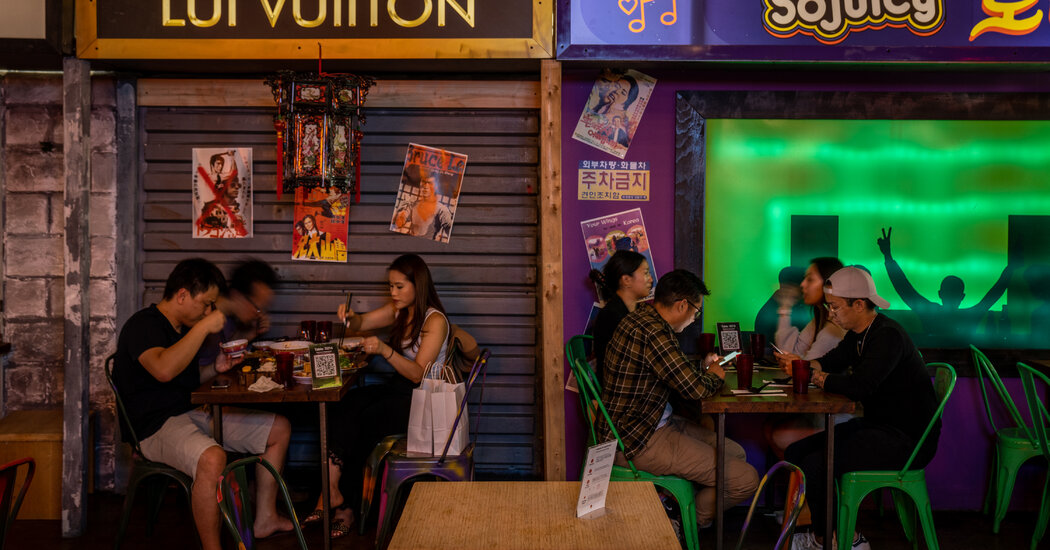 Toronto is entering the summer

As travel picks up again, Canadian tourists dominate, with traffic from the United States just beginning to return and foreign visitors still scarce, according to data from the agency. Summer is typical high season; this could be the last year to take advantage of Toronto in warm weather before the city is flooded again.

More than 5,100 restaurants have been closed in the province of Ontario during the pandemic, says Restaurants Canada, a national trade organization. But the food scene of this omnivorous city has come back to life. In May, Michelin chose Toronto as the first Canadian city to have its own guidebook.

“The vibrancy and diversity is still intact”, said Scott Beck, president and chief executive of Destination Toronto. “Everything that makes our food scene so unique in North America is still there. The diversity in art and culture is still there.”

And yes, cannabis shops were mushrooming through the pandemic, but “they’re a good-for-nothing,” said Mr. Beck. “Cannabis is legal across the country. Toronto is not Amsterdam.”

The busiest eateries usually open on the bohemian outskirts of Toronto. But tempting restaurants have now sprung up in the downtown area. “The demand from weekend warriors for social dining and entertainment is really coming back,” said Hanif Harji, the chief executive of Scale Hospitality, which operates 14 restaurants. “There’s another buzz on the street.”

mr. Harjis bar girlOpen since April, it hides behind an unmarked door next to a condo tower in King Street West. On a recent Thursday night, the high-ceilinged room was pounding with what felt like pre-Covid energy. Chef Ted Corrado refines traditional tapas with Canadian provisions; think British Columbia spot shrimp ceviche, or Canadian beef chimichurris with Ontario slopes (tapas range from 9 to 24 Canadian dollars, or about $7 to $18). In August, Mr. Harji open Miss Likklemore’s, a Caribbean spot in King West Village. Come fall, Scale and Montreal chef Antonio Park open AP, a gourmet spot atop the Eataly outpost in Yorkville.

Also in Yorkville, Chef Rob Rossi’s Ligurian menu at Osteria Giulia attracts well-dressed locals who feast on traditional flatbreads, salumi and pastas (entrees from 32 to 75 Canadian dollars). Open since October, it remains the most popular table in the area. Around the corner, adrak employs a team of chefs each specializing in a regional Indian cooking style; the unconventional menu features smoked salmon with pommery mustard (entrees from 29 to 60 Canadian dollars).

On the northern edge of Yorkville, Mimi Chinese goes back to the future in a neon-lit room with red velvet benches manned by snared servers. The menu spans the provinces of southern China, from Guangdong-inspired raw yellowtail kingfish to Shaanxi charred cabbage. It opened in October and remains a tough ticket (entrees from 26 to 88 Canadian dollars).

With soaring commercial rents, burgeoning apartments and scarce space, nightlife has yet to catch up with food service. “We get a lot of restaurants, which is great. The challenge is to find a place to dance,” said Michael Nyarkoh, community marketing manager at the new Ace Hotel Toronto.

Closed three years ago for renovation, 127 years old Massey Hall reopened in November with red velvet seats, beautifully restored stained glass, full accessibility and a crystal clear sound system. The return had a special meaning for this music-crazed city. “Massey Hall was built a year after Carnegie Hall, and the Torontonian dream for a band is to play there,” said Kevin Drew, a founding member of the Toronto band. Broken social scene, which played its first gig at Massey Hall in April. The $146 million restoration “has done an incredible job of preserving the spirits and the warmth,” he said. Canadian music royalty from Oscar Peterson to Rush have played the hall, whose packed slate for 2022 includes soul legend Mavis Staples and alt-country star Orville Peck.

Toronto’s live theater scene, one of the largest on the continent, is coming back to life after pandemic closures. For the first time since 2019, the Toronto Fringe Festival, which ends on July 17, will have live performances again. Among the grand Broadway-style homes, smashing openings include: Harry Potter and the Cursed Childwhich opened in May; jesus christ superstar (Opens Aug 10) and Singing in the rain (September 23). In February, Hamilton returns. Tickets range from about 99 to 260 Canadian dollars.

On indie stages, intriguing work includes the suburban drama ‘Detroit’ on the east side Coal Mine Theaterer (until August 7); the world premiere of Erin Shields’ Shakespeare prequel “Queen Goneril” in soulpepper (opens August 25); and the Kafka-inspired “cockroach” at dragon (opens Sept 13). Tickets at these theaters range from 25 to 60 Canadian dollars.

After nearly two years of online shows and stop-start openings, Toronto’s museums have returned with powerful lineups. In June, the Ontario Art Gallery debuted the sweeping exhibition “Faith and Fortune: Art Across the Global Spanish Empire” (through October 10), featuring 200 works spanning four centuries and three continents. More intimate shows by Canadian artists Ken Lum and Ed Pien explore personal histories through image and text. A few blocks to the north, the Royal Ontario Museum opens the Harry Potter-related “Fantastic Beasts: The Wonder of Nature,” exploring what the museum calls “the intersection of natural history and pop culture” (until January 2, 2023).

A few blocks to the west, the Bata Shoe Museum launches “Future Now: Virtual Sneakers to Cutting-Edge Kicks,” featuring high-tech designs such as Nike’s self-lacing MAGS and a collaboration between Zaha Hadid and Rem Koolhaas (until October 2023). the fantastic one Gardiner Museum, one of North America’s only museums dedicated to ceramics, shows “Sharif Bey: Colonial Ruptures,” featuring African-inspired icons by the Syracuse-based artist (until August 28). And the four year old Museum of Contemporary Artset in a converted auto factory in the west, offers two knockout shows: “Land of Dream,” haunting portraits of New York-based Shirin Neshat, and “Summer,” the first solo show of Felix Gonzalez-Torres, a co-founder of the trailblazing queer collective, General Idea, who died in 1996 (both through July 31).

New hotels at the handful

This is proving to be a record year for hotel openings. Canada’s first Ace Hotel will open this summer on a quiet cul-de-sac between the busy Queen and King streets. Toronto-based Shim-Sutcliffe Architects designed a circular modernist facade whose tall concrete interior houses Alder, a Mediterranean restaurant run by famed Toronto chef Patrick Kriss (rates from 349 Canadian dollars per night).

With the closing of a huge department store in Hudson’s Bay in March, the intersection of Yonge and Bloor streets felt bleak. The mood should brighten this month with Toronto’s scoop W Hotel, on the northeast side. Formerly a stern Marriott, the 254-room W updates its brutalist concrete building with riotous colors and abundant greenery. On tap: a breezy street-level cafe, a 5,000-square-foot tapas-and-champagne bar, and a huge rooftop lounge apparently inspired by Yves St. Laurent’s villa in Marrakech (rates from CAD 475 per night) .

The 1 hotel brand, owned by former Starwood chairman Barry Sternlicht, made its debut in Toronto on the western edge of the Entertainment District last August. Promising “sustainable luxury” – and with 3,000 plants – the 112-room hotel was the only Canadian contender at Condé Nast Traveler’s 2022 Hotlist (rates from 530 Canadian dollars per night).

Queen Street West’s 19 rooms Drake Hotel isn’t exactly new—it opened in 1890 and was revamped in 2004—but the 32-room Modern Wing just debuted in a sleek, compact building next door. This is the kind of property with a full-time art curator, color-saturated interiors through the innovative design agency and live music in the basement. The window restaurant offers great sidewalk views (rates from 379 Canadian dollars per night).

On the site of the former Pilkington glass factory near the entertainment district, the Robert De Niro sponsored nobu brand will open its first mixed-use development in 2023, which will include a hotel, 650 residences and a Nobu restaurant. Toronto architect Stephen Teeple has likened his perforated black building design to a tuning fork†