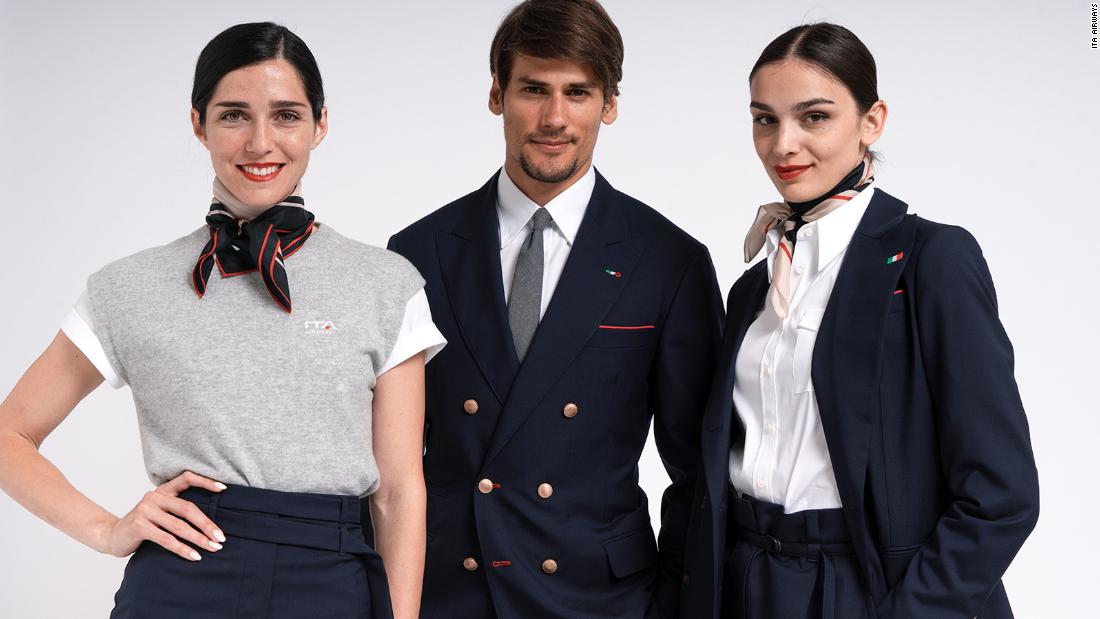 This Italian airline just got a brutal new look

(CNN) — When it launched in October 2021ITA Airways, Italy’s new flag carrier, pledged to bring a “100% Italian experience” to the skies.

The new look was unveiled alongside ITA’s three new long-haul Airbus A350-900s – the aircraft the company says is their ‘new ambassador’.

Holding on to their all-Italian promise, the A350’s interior was styled by Walter De Silva, a car designer who worked for Fiat and Seat, before becoming chief designer at Volkswagen. De Silva was inspired by the song “Il cielo in una stanza” or “The sky in a room,” he said in a press release.

That means bringing blue into the plane – but not the bright blue planned for the exterior of ITA planes, but a more subtle midnight blue. In economy seats, that blue becomes the base of the seat, with a sand-colored stripe in the middle. The colors have been changed for comfort economy seats with slightly more legroom and for business class seats. There is a nod to the tricolor flag on the headrests, too.

For long-haul flights, there will also be mood lighting depending on the stage of the flight (boarding, take-off, mid-flight and meals), as well as for sunrise, sunset and nighttime.

ITA plans to gradually upgrade its fleet from its current Alitalia aircraft to a fleet of new Airbuses, and predicts that by the end of 2025, 75% of the fleet will be less environmentally harmful, next-generation aircraft.

The new business class from ITA.

Meanwhile, the uniforms — designed by Bruno Cuccinelli — are making a leap into casual wear, allowing women to wear white cap-sleeved T-shirts and sweater vests. A more traditional uniform, closer to Alitalia’s dark blue uniforms, is another option for the crew. Women can choose between a skirt or trousers, while the men’s uniforms brighten up Alitalia’s navy blue suits with large gold buttons.

“There was a time when air travel was synonymous with ultimate luxury, regardless of seat assignment. The uniforms and dress codes of flight attendants, who were primarily women, were designed to exude glamor and femininity, perhaps at the expense of the comfort of those staff working long hours. work,” she says.

“Today, travel is more commonplace and cabin crew is more gender-balanced. Travel culture has changed and we can no doubt see this reflected in uniforms.

“Workplace dress codes have relaxed in almost every industry, so it’s not surprising to see a T-shirt in these new designs, for example. While the new designs retain some of the flight attendant’s attributes, they’ve been modernized with a more casual styling, such as the slightly cropped or turned-up trousers and the option of a women’s boot.

“Brunello Cucinelli has presented several double-breasted suits in his last two menswear collections and they have been adopted in this line as well.”

According to the airline, the uniforms will be rolled out in the coming months. The gradual introduction of new looks by ITA is due to cost-cutting measures for the airline that emerged from the bankruptcy of Alitalia.

And then there’s the food. From June 2, intercontinental flights will serve meals planned by some of Italy’s top chefs, starting with Enrico Bartolini, the only chef in history to be awarded four Michelin stars in one year.

Economy will see a “totally revamped menu”, while every food and drink on board will be an Italian brand or recipe.

In the future, that focus on Italianity coffee is served as an “experience” and wellness “unique experiences” on board. Whether that will be guided meditations, as several airlines already have on their in-flight entertainment systems, or full in-seat massages, as Virgin Atlantic used to offer, is not yet clear.

The gradual roll-out of ITA also applies to the roadmap. It will launch routes from Rome to Los Angeles, Sao Paulo and Buenos Aires this month.