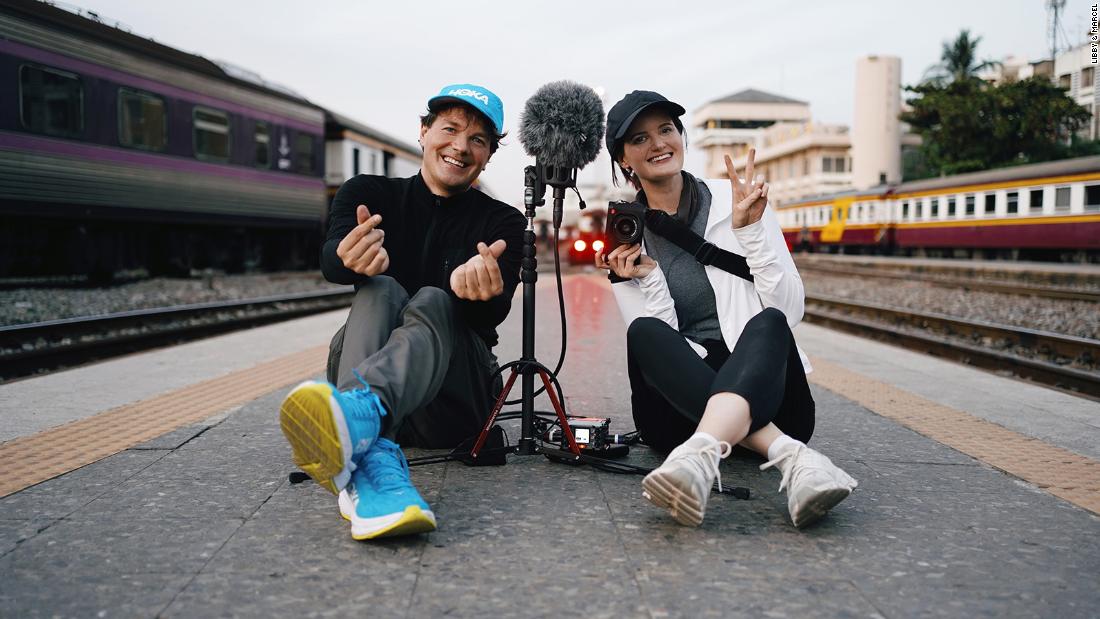 They met on a promenade in Nice. Now this couple earns a living by traveling in a world of sounds

(CNN) — Seven years ago, American Libby Green traveled with her mother through Italy and France, concluding their journey with a visit to the southern French Mediterranean resort of Nice before flying back to the US.

Meanwhile, German-born Marcel Gnauk and a friend were also in Nice to attend the Crossover Festival, a celebration of eclectic music.

As he walked along the Promenade des Anglais on the city’s beach, Marcel saw Libby with a Hasselblad, a traditional medium format film camera, in her hand and couldn’t resist approaching her.

“I like old cameras, Hasselblad, that’s great,” he recalls.

The couple talked about the camera and travel, and he invited her to the music festival that night. The next day, Libby flew back to the US, but they kept in touch.

Less than a month later, Libby traveled to Italy and she and Marcel, who worked in Switzerland, met again.

“Then I think we knew, okay, this is something special, something serious,” says Libby.

Marcel then visited Libby in Los Angeles, where she worked in the film industry after studying cinematography, and they traveled around California for a few weeks.

It was then that they knew they wanted to be together and travel the world.

So Marcel returned to Switzerland, Libby stayed in LA and worked another five months to save money.

They bought a motorhome and in January 2015 Marcel met Libby at Zurich airport.

“In less than a year, we had quit our jobs and sold everything we actually owned,” says Libby. Then they traveled through Europe for four months. A camper trip in Japan followed, then time in Bali, Taiwan, Cambodia and Malaysia.

In the years since, their passion has grown, not only for each other, but also for a world of sounds, recorded with their high-end microphones and shared on their social media.

The couple turned a practical matter of recording sound for a travel video they were shooting in Cambodia into a full-time business supporting their digital nomadic lives. But it took them a while to discover their calling.

In the early years of their relationship, sharing their travel experiences online became part of their routine.

Libby is adept at using a camera. But they struggled to find a focus.

“There were Libby and Marcel trying to be food bloggers,” Libby recalls.

“It was a disaster,” adds Marcel. “But it was a good learning experience,” notes Libby.

Libby then filmed some flying pigeons in the Cambodian capital Phnom Penh that she wanted to use in a film. But she couldn’t hear the sound of their wing beats.

They searched the internet, searched sound libraries, but couldn’t find anything suitable. So Marcel took a $100 audio recorder and set out to find the missing sound to record.

He didn’t find any pigeons — but he did manage to change the direction of the couple’s future.

Marcel turned on the recorder in a small construction site where women were shoveling gravel, listening through cheap headphones.

Not only was he impressed by the sounds of construction, but there were also monks chanting and motorbikes honking behind them.

“It was as if the sound was hitting my head from all sides,” says Marcel. “Everything came to life, and from that day until now I’ve never stopped recording.”

A passion for sound

In the six years since that first recording, Libby and Marcel have recorded audio in more than 25 countries, mainly in Asia, Europe and North America, spending months in each country.

They’ve developed a more sophisticated recording setup to include stereo, ambisonic and binaural techniques – but still compact enough to fit into their traveling lifestyle.

This meant investing in high-quality microphones and recorders to fulfill their ongoing passion to share authentic soundscapes from anywhere.

“We document the world through sounds,” says Libby. “We also try to be a source of inspiration for others to look at sounds in a different way.”

It can be an expensive passion. Typically, high-fidelity recording equipment runs into the thousands of dollars for individual microphones and audio recorders. For example, one of their stereo recording kits with German-made microphones costs about $8,000.

But for Libby and Marcel, it’s not just about equipment. Their goal is to really experience a place through sound.

For example, it took them two days to visit Iceland’s now famous black sand beach at Solheimasandur. They made the two-hour round trip with their gear and spent up to 10 hours a day recording in wind and hail.

A favorite memory was shooting around the iconic wreckage of an American Navy Douglas plane that forcibly landed on the beach in 1973.

“It was just amazing, how it sounds, how the metal creaks in the wind,” says Marcel.

In 2020, the couple took their mobile recording studio to the coast of Iceland.

“The terror of the water. You have to experience this”, adds Marcel. “If you just go there and take a picture and then leave, you miss so much.”

Free to use sounds

Libby and Marcel share these experiences via Instagram (@freetousesounds) and their YouTube channel (Free to use sounds — Travel for sounds). Through their posts, they offer not only their passion and experiences with recording sounds, but also details of the equipment and techniques they use.
Libby creates and edits their YouTube videos and manages their website (www.freetousesounds.com). Marcel does most of the sound recording and editing as well as the social media posts.

A passion becomes a business

Marcel says their ‘a-ha’ moment came when he was sitting in front of a computer in 2017.

Libby had added a donate button to their website and a Hollywood post-production ad donated a few bucks.

“I’m like, ‘Oh! We just made three bucks!'” Marcel recalls their first donation.

Then he realized that others shared a passion for sound – and were willing to pay for it.

“We wanted to be a resource that is affordable for all types of people to download the sounds,” says Libby.

From this beginning, Libby and Marcel have developed a suite of premium sound libraries that are both available for purchase and free download.

And they are still excited to travel to new places and record new sounds.

“It doesn’t feel like work because we just love what we do,” says Marcel.

The challenges of a nomadic life

As for the disadvantages of the nomadic lifestyle? Libby and Marcel have no home base and are constantly traveling. They fought through hard times, running out of money.

“When you have a home base, you have more of a concrete routine,” says Libby. “It’s always changing for us, so sometimes that takes more effort, more money.”

“And we’re so behind on sounds,” adds Marcel, referring to their unedited recordings. “It’s more exciting to record, to be in the present than sitting back with studio headphones.”

But the couple prefers to work alone, without outside help.

“We have no one but us, we are just the two of us,” says Libby. “Maybe it’s trust issues, but for us we know what we can do.”

Libby and Marcel recently left South Korea to continue their journey in Malaysia. Their next big plan is to travel the Pan-American Highway from Alaska to Ushuaia, to the southernmost tip of South America.

“I think it would be a dream to go to Antarctica to record sounds. ‘Whoa, a glacier is breaking down,'” says a smiling Marcel.

But whether it’s a transcontinental road trip or the frozen wasteland of Earth’s southernmost continent, Libby and Marcel’s passion for each other and the sounds they record will stay with them forever.

And, as Marcel says, “It takes us 45 minutes to pack our things and be at the next airport.”

Tags: The couple travels in a world of sounds - CNNtrip
ShareTweet