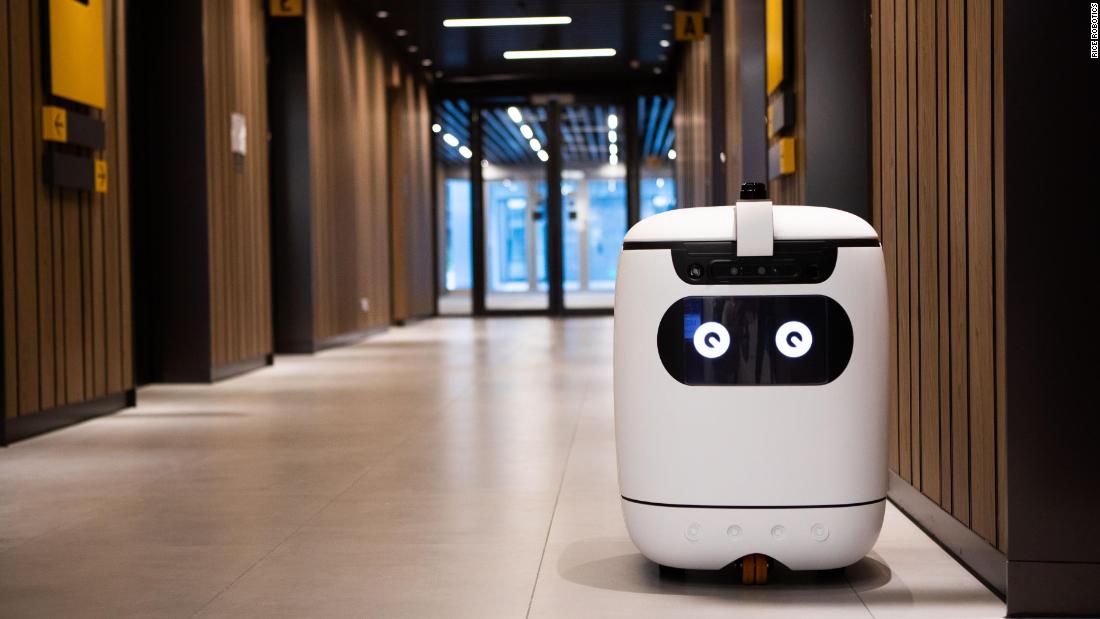 These cute robots can deliver your next coffee

(CNN) — Strolling the corridors of Hong Kong’s Cyberport innovation hub, the little Rice Robot is on a mission.

The stubby white bar is similar in construction to Star Wars’ R2D2 robot, but has the big eyes of Pixar’s WALL-E. It delivers drinks to customers of the HFT Life cafe in a compartment in the “main” that is unlocked by the customer with a PIN code sent to their phone.

While Rice’s activities in the cafe are limited to distributing drinks, the compact robot already offers a range of services in locations in Hong Kong and Japan. Rice is deployed as a bellhop at the Dorsett Wanchai hotel in Hong Kong and provides room service to guests. In Tokyo, it supplies snacks to employees at SoftBank Group’s headquarters from the building’s 7-11 convenience store. Earlier this year, Rice even made his TV debut in the Cantonese drama series Communiondeliver coffee to a cast member.
Rice is part of a new generation of smart robots capable of navigating complex and crowded environments, including elevators. Equipped with light sensors, depth cameras and ultrasonic sensors to avoid obstacles, Rice can maneuver freely around multi-storey hotels and shopping malls, said Viktor Lee, founder and CEO of Rice Robotics.

Customers are given a PIN that allows them to open the hatch in Rice’s “head” to get their drinks.

Lee describes Rice as “your friendly neighborhood robot” and hopes it can help the hospitality industry fight labor shortages as the population ages, while appealing to post-pandemic demand for heightened hygiene protocols.

“Even after COVID, people pay a lot of attention to contact,” Lee says. He believes that “this type of delivery robot will see steady growth over the next five and ten years.”

With a background in logistics, Lee founded Rice Robotics in 2019 to solve the challenge of “last-mile delivery”.

Supported by the Cyberport Incubation Program, Lee and his team developed Rice, the first of three robots. Designed for delivering goods, it can be used in healthcare, retail, logistics and hospitality.

The pandemic created a new demand for service robots, with the market growing by 12% in 2020 according to the International Federation of Robotics. This opened up a new role for Rice: quarantine hotel butler. In Hong Kong, incoming travelers have been quarantined for up to three weeks due to strict regulations and hotels have had to devise new ways to minimize human contact and prevent cross-contamination.

The Dorsett Wanchai hotel began using Rice robots in June 2021. “It’s a great way to serve our guests and maintain our service standards, while adhering to social distancing and anti-pandemic measures,” said General Manager Anita Chan, adding that guest feedback. was positive: “With its cute appearance, Rice Robot is especially loved by the kids.”

During the pandemic, the Dorsett Wanchai hotel in Hong Kong introduced a team of high-tech robots, including droids for cleaning and sanitizing, and Rice for contactless room service.

Lee says customers started asking about cleaning robots during the pandemic. His team responded by developing a second robot called Jasmine in just eight weeks. Jasmine replaces Rice’s delivery compartment with a tank of sanitizing solution and has two nozzles on her head to spread sanitizer.

Lee created a new personality for Jasmine – who was already deployed in shopping malls, conference centers and airports – by giving her cartoon eyebrows that frown in a serious expression. “She has to go out and sanitize the whole place, and she doesn’t want anyone to get in her way,” Lee says.

The team’s third product, Portal, is a larger robot with a touchscreen, two-way intercom and streaming cameras for patrolling public areas. In addition to making deliveries, Portal can guide visitors to locations such as shopping malls, convention centers and hospitals.

While industrial robots are commonplace in the automotive, manufacturing and electronics sectors, until recently most service robots in the hospitality industry were used for new purposes.

But the pandemic has changed that, said Kaye Chon, dean of the School of Hotel and Tourism Management at Hong Kong Polytechnic University.

In response to travel and social restrictions, “there was an exodus of workers in our industry,” Chon says. Combined with hygiene concerns and a growing adoption of smart technology by younger customers, Chon sees robotics as the next step in the ‘digital transformation’ of the hospitality industry.

However, the technology still needs to overcome some hurdles to achieve the same efficiency as industrial robots. The costs for this technology are still high — Rice Robotics’ products start at $9,000 per unit — and shopping malls, hotels and restaurants need to be modified to be robot-friendly, Chon says.

Staff also need to know how to program the robots, a skill that is lacking in the industry. To remedy this, Chon helped develop a new “smart tourism” curriculum that includes AI, robotics and big data, but says it will take time for current students to enter the job market. “This is how our industry is evolving,” he adds.

Portal, Rice Robotics’ third product, is larger with a touchscreen, two-way intercom and streaming cameras for patrolling public areas, such as Captain C, pictured at the Hong Kong Exhibition and Convention Center.

Rice Robotics has created a fleet management app for users and helps customers make infrastructure changes, such as programming the robots and elevator systems to communicate with each other. The startup also offers its robots with a monthly subscription service, starting at $800 per unit, which includes technical and on-site support.

And while robots can help minimize human contact, they still need to be sanitized between staff use, Chon says.

Chon sees great opportunities for robots to perform simple, repetitive tasks in budget and mid-range hotels — but the technology is far from replicating the “small, personal touches” to which luxury luxury properties sell themselves, he adds.

Rice Robotics isn’t the only player in the service robot space. The Danish company UVD Robots offers: robot butlers to Yotel’s hotel in Boston. based in the US Relay Robotics (formerly Savioke) has been building delivery bots for hotels and since 2013 Richtech Robotics’ Matradee robot assists human waiters like an autonomous tray.
Rice’s cute features add to its appeal, though — an intentional part of the design, Lee says. studies have found that human-like traits increase affinity for robots, making Rice’s aesthetic a key part of its effectiveness in the hospitality industry for brands looking to make a good impression on customers.

Rice Robotics has grown rapidly during the pandemic, from a team of three in 2019 to 26. Now based in the Hong Kong Science and Technology Park, the company opened an office in Japan in 2021 to help manage its growing customer base there. With a rapidly aging population, Lee says robots are essential to support Japan’s retail and hospitality industries.

In addition to hospitality, Lee also sees that robots are becoming more common in our homes. In a recent project with the Japanese Postal Service, several Rice units were deployed in a high-rise building to help deliver parcels and mail to residents.

Tags: These cute robots could deliver your next coffee - CNNtrip
ShareTweet