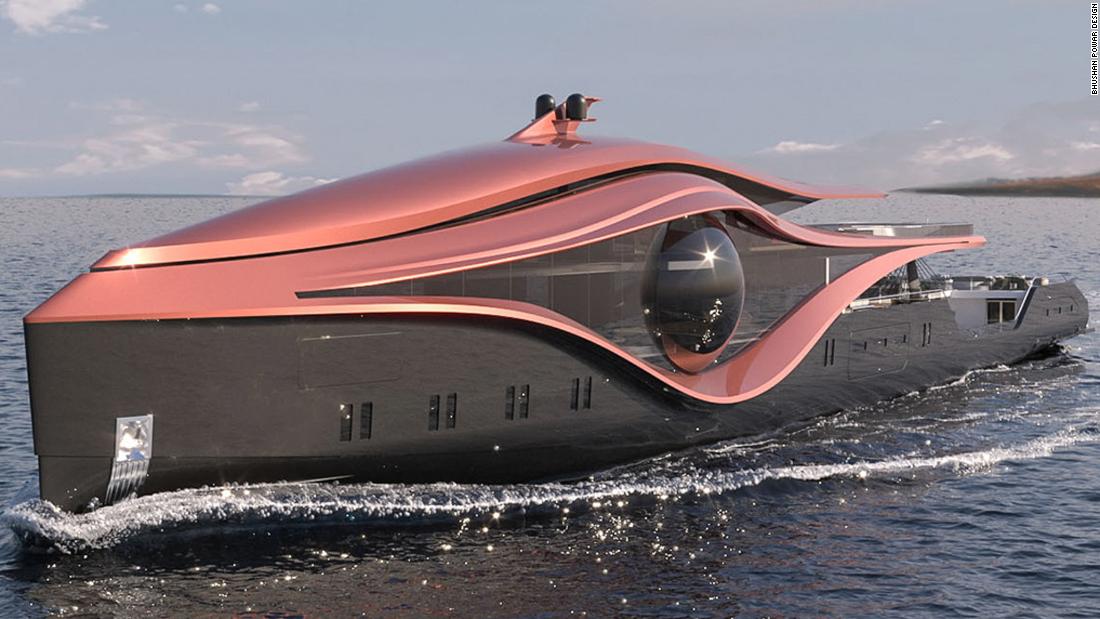 The unusual new superyacht concept with a giant glass eye

(CNN) — With record numbers of superyachts hitting the market, designers have been pushing the boundaries to make sure their concepts stand out.

This new concept from Indian yacht design studio Bhushan Power Design perhaps one of the most eye-catching to date.

The 110-meter-long ship, called Zion, has a beautiful glass dome that looks like a giant eye, or a ‘black hole’.

Serving as a viewing platform for those aboard the superyacht, it offers 360-degree views and is sure to attract maximum attention at sea.

“Our concept attracts attention with its modern elegance and surprises the owner with the mysteries of the deep,” say the designers, before pointing out that black holes — points in space so dense they create deep gravitational pits — “energy attract. ”

Aside from the dome, which is clearly its standout feature, Zion will feature a glass-bottom infinity pool, as well as a glass elevator that goes from deck to deck.

A flybridge where passengers can lounge and enjoy the “all-weather” view and a 12-meter helipad are both located on the upper deck of the ship, which has an aluminum structure.

A computer-generated image of the ship, featuring a 40-foot (12-meter) helipad and a glass-bottom infinity pool.

There are 10 luxury staterooms on board and a master suite on the main deck with electrically operated sky lounge balconies.

The lower deck consists of a beach club area with a gym and an open garden space which can be transformed into a spacious sun lounge via fold-out terraces on either side.

Zion, with an estimated price tag of between $500 and $600 million, will also have a large tender garage stocked with jet skis and various other water toys.

Though it’s just a concept at the moment, the design studio’s founder, Bhushan Powar, is hopeful that Zion will one day become a reality.

He does admit that it will take a lot of time and research to determine whether this is possible.

Bhushan Powar Design, based in Goa, was launched in 2019 and is described as the ‘first luxury yacht design studio in India’.

When devising the concept, the designer was inspired by the phenomenon of black holes.

The studio’s concepts are largely influenced by the Arabian Sea, Powar says.

In 2019, the design team unveiled Mori, a 90m superyacht concept inspired by the shortfin mako shark.

Zion is one of many innovations unveiled this year. Rome-based design company Lazzarini Design Studio recently unveiled Air Yacht, a new concept that can sail both in the air and on the ocean.

Meanwhile, in January fellow Italian design studio SkyStyle presented its latest design Unique 71, a 71-meter superyacht in the shape of a knife.

How to get to TANGADAN FALLS, La Union + sample route and budget