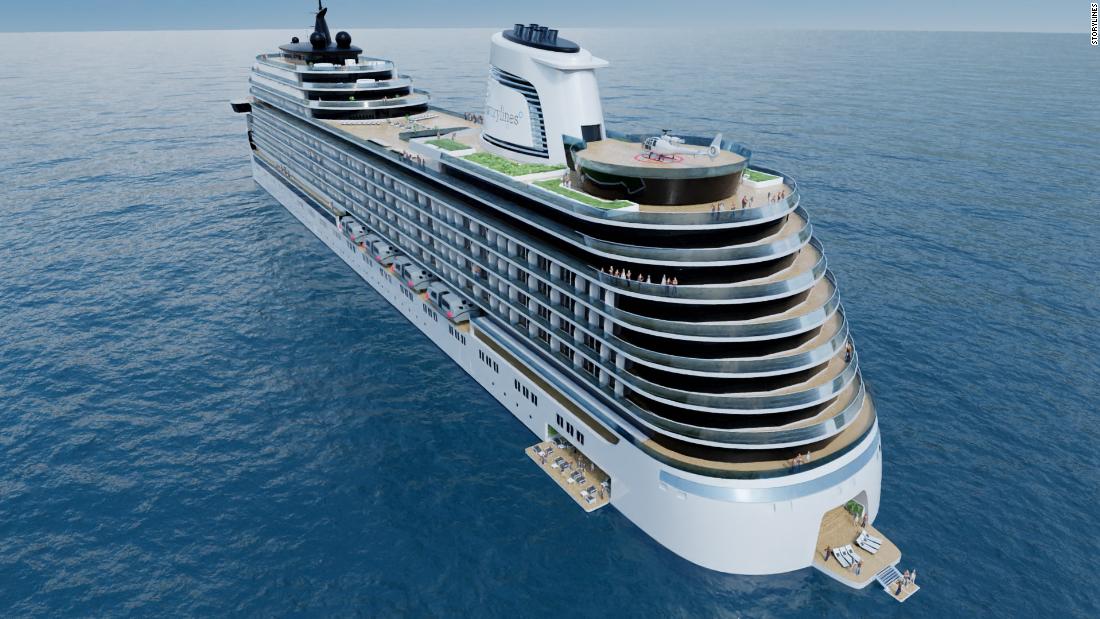 For many cruise lovers, living on a ship permanently is a long-held, albeit extremely unrealistic, dream.

While extended world cruises have become more popular, with future new voyages being announced despite the effects the pandemic, and various luxury residences at sea have entered the market in recent years.

However, such experiences tend to come with an incredibly high price, which ultimately means that many ardent cruise fans simply can’t afford to get on board.

But a new “residential community at sea” named Storylines is hoping to change that by offering a “more affordable” opportunity to live on a cruise ship for an extended period of time, or even permanently.

Launching in 2024, Storylines is offering up fully furnished one-to-four-bedroom residences, along with studios and two-story penthouses, on board its upcoming ship, with prices starting at $400,000 and rising to $8 million.

The homes are available as outright purchases, although a limited number of 12 and 24-year leases are also offered.

A rendering of the upcoming MV Narrative ship from Storylines, a “residential community at sea.”

According to founder and CEO Alister Punton, an undisclosed number of the 547 units have already been sold, and the residences are on track to sell out by the end of 2022.

Those who snap up a home onboard Storylines’ upcoming MV Narrative ship, currently under construction in Croatia, will receive an all-inclusive life at sea with a host of impressive amenities in return.

The vessel is set to feature 20 dining concepts and bars, a microbrewery, and three swimming pools, as well as a 10,000-book library, a movie theater, a state-of-the art wellness center, a bowling alley and a solar powered hydroponic garden farm.

The Narrative is scheduled to begin a 1,000-day maiden voyage across six continents in late 2024, with the ship spending an average of three to five days in each port.

“What a typical cruise line might do in one month or three weeks, we will take three to four months to do,” Punton tells CNN Travel.

“So that’s how much we extend the experience out. And they [residents] have opportunities to have input into where the ship goes next.”

In addition to the scheduled stops, there will also be a number of “residents choice” days, throughout the month, when those on board get to choose the port of calls.

Those who have a leasehold agreement receive occupancy rights for a certain term up to the full life of the vessel — 12, 24 or 60 years — says Punton.

The residences were devised by leading interior design company Tillberg Design of Sweden.

“With a full outright purchase, the resident owners get a perpetuity clause, which means they are able to roll over into a new residence on a future ship without an additional purchase, making this a long-term investment,” he adds, before explaining that the homes can be rented or sold “just the same as any other real estate investment.”

Aside from the purchase price, residents will be charged a “living fee,” which ranges from $65,000 to $200,000 per unit annually and covers expenses such as food and maintenance.

While this certainly won’t be affordable to everyone, the fees are considerably less than other floating complexes such as The World, where homes can cost around $14 million and annual maintenance fees up to $1.4 million.

“Once you pay your fees, you can pretty much put your personal wallet or credit cards away and save for the rest of the year if you choose to,” adds Punton.

Although cruising has long been associated with the older generation, this has shifted in recent years, with more and more younger people becoming drawn to the cruising world.

According to Punton, the age ranges of those who’ve already put down deposits is incredibly wide, and entry level residences have been selling just as well as those at the higher end of the scale — the current average starting price is $897,000.

“We have retirees and children and everyone else in between, including younger digital nomad types,” says Punton.

“And a lot of families are coming on board. In this arena, it’s those in their 30s and 40s with young children. We’ve got the whole range.”

Owners can rent out their residences when they’re not using them.

In order to cater to those with children, Storylines offers a full education program, as well as plenty of education spaces. There will also be a team of medical staff, including doctors, nurses and physiotherapists, on the ship, along with a pharmacy and a post office.

While potential Storylines residents are interviewed to ensure they’re a “good fit for the community” and “understand all the founding principles,” Punton stresses that there isn’t a typical resident as such.

“Storylines is a true community, and a community needs everybody,” he says. “You need different types of people from all walks of life to make that community.”

Owners are welcome to invite guests on board, and have the option to rent out their residences when they’re not using them.

The environmental impact of cruising has been a hot topic in recent years, and Punton stresses that the ship is being designed with this in mind.

Storylines will have various sustainability initiatives in place once it launches, such as an on board solar-powered hydroponic unit that will grow some of the produce used on board, as well as waste-to-energy technologies.

“We will definitely be the greenest cruise ship out there,” says Punton. “That’s not just the fuels that we use [the ship will run on liquefied natural gas (LNG), one of the cleanest-burning non-electric marine fuels].

“But there’s also all the other parts to it as well. So it’s how we source our food, how we store food in bulk, growing it on board the ship, converting waste to energy, limiting use of plastics and all those kinds of things.”

When the project was first launched in 2016, the initial plan was to refit an older vessel into a residential ship.

However, after a couple of false starts with existing ships that weren’t quite suitable, it was decided that constructing a new ship would ensure the best possible outcome.

Although Storylines has been in the works for a few years, the team have noticed a change in demand as a result of the global pandemic, with an increasing amount of families, along with executives, showing interest.

Some amendments have since been made to the design plans, with new residences added that are specifically tailored towards this market.

Storylines has already built up a strong community of followers, and some of its earliest supporters are now known as the Founders Circle.

According to Punton, the team are constantly checking in with those who’ve purchased a unit, particularly the Founders Circle, regarding the design plans, as well as onboard facilities, in order to ensure that they’re happy with the final result.

“That’s a really important component for us,” he explains. “Because the ship is really theirs at the end of the day. They’re the ones who’ll be living in it, and it needs to be built for them.”

Measuring 643 feet, The World is currently the largest private residential yacht on the globe, with a combination of studios along with one to three-bedroom apartments available on board.