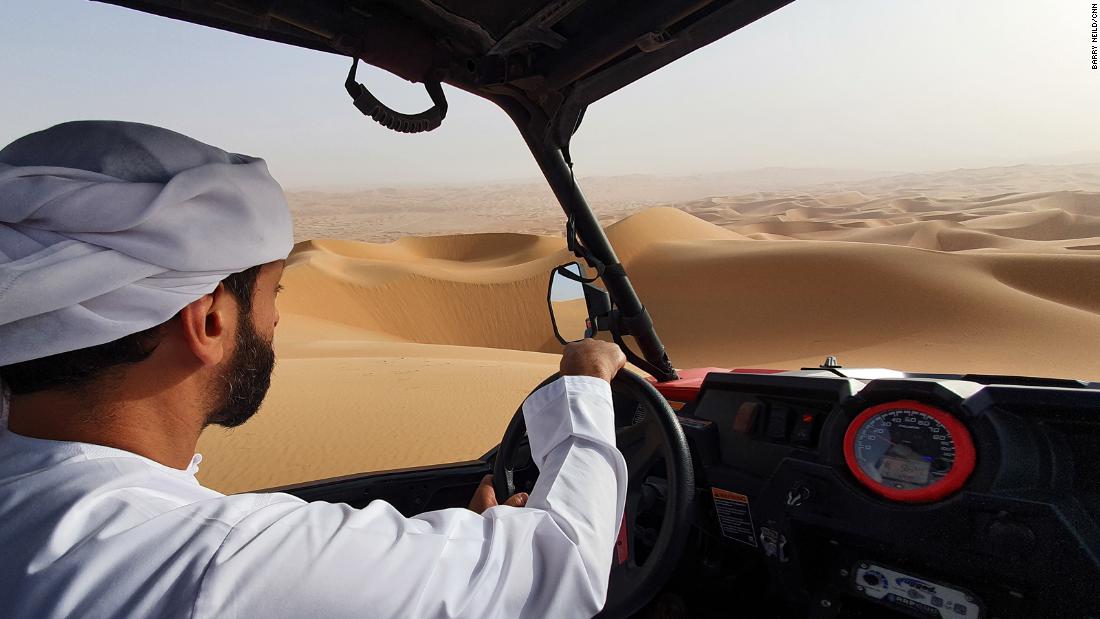 The man who knows every sand dune in the desert

Liwa Desert, Abu Dhabi (CNN) — When Salam Almazrouei was a boy, he and his friends played a game in the desert that most people would find terrifying.

In the middle of the night, despite being too young to drive in most countries, they would take cars to the vast sea of ​​sand dunes stretching from Abu Dhabi to Saudi Arabia, then turn off the headlights.

With only the moon to light the way, they would then race to see who could get home the fastest.

It was clearly a game fraught with danger. If you take a wrong turn, break down or get stuck in soft sand, you’re on your own, miles from civilization, at the mercy of a rising desert sun that can bring oven-like temperatures during the day.

To Almazrouei, these seemingly identical dunes, stretching as far as the eye can see, are as familiar as streets to a city dweller. While the occasional high wind can blow the sand around, he says the terrain never loses its familiarity.

Also known as Rub’ al Khali or the Empty Quarter, this corner of the Liwa Desert has been home to the Almazrouei Bedouin family for generations. Although they have now set up homes and businesses in the towns and cities of Abu Dhabi, the desert remains in their hearts and they return regularly.

And now the 46-year-old wants to share. Inspired by his own extensive travels as a student and engineer, he has tried to brainstorm ways to help people from outside the UAE to participate in and enjoy the magic of Liwa.

“First I came up with the idea of ​​setting up a camp in the US, in California, complete with 70 Arabian camels,” he says. “But they didn’t allow it because of concerns about foot and mouth disease. And so we said, ‘let’s set it up here.'”

Liwa Nights only has a handful of tents set on a gentle slope.

“Here” is a place of almost otherworldly beauty. A smooth blanket of sand that gently ripples as far as the eye can see. At night it basks under the inky skies alive with stars. Bright sunlight and blue skies during the day.

It really is the middle of nowhere. It’s a two-hour drive south and west from central Abu Dhabi, through the small town of Zayed, then another hour south until the road almost reaches its last mile before being swallowed by sand.

To receive visitors, Almazrouei, with the support of his father, Ibrahim Almazrouei, Liwa evenings — an elegant desert tented camp that straddles a gentle slope on the edge of the Empty Quarter.

On the outside, the white sandstorm-battered exteriors of the tents look functional. Inside, they offer pure glamping luxury.

Pulling back the Velcro-sealed doorway reveals an air-conditioned interior, lined with plush curtains, carpeted with a traditional carpet and lit from above by an elegant lamp dangling from the tent’s high ceiling.

There is a large, comfortable double bed made up with fine cotton sheets, a dresser, wardrobe, full-length mirror and coffee table and chairs. A curtain on the side to reveal a real bathroom, complete with flushing toilet and a shower equipped with luxurious soap.

If you can withdraw from contemplating the vast emptiness and adjust to the hushed silence of being so far from civilization, a good night’s sleep is a good option.

“I don’t see it as a hotel, but as an experience,” says Almazrouei. “When you get to your room you will be amazed that everything is designed by us. When you are in your tent you are in luxury, but step outside and you are in the desert.”

The tents are furnished with luxurious comfort.

For food and entertainment, Almazrouei has built a more permanent structure nearby. Designed to look like a traditional 19th century Middle Eastern home, using imported African wood, it has a dining room, bar, indoor and outdoor seating and a gift shop.

On warm nights, lit by fairy lights or a flickering campfire fueled by a refreshing breeze, it’s the perfect place to gather for a cool drink to hear stories about the desert. During the day it is the meeting point for activities such as camel rides, falconry or dune bashing 4×4 drives.

The best time to visit is during the cooler months from October to March. The place stays closed in summer when it is too hot. Temperatures are reportedly not rising until late August, when a bright star called Sulhail appears above the southern horizon.

If Almazrouei sit behind the wheel for a Liwa dune bashing excursion, be prepared for a rollercoaster ride. Using skills honed during his moonlit desert races, he’s a laid-back daredevil, dropping his dune buggy down near-vertical descents or tipping sideways along ledges, almost to the tipping point.

He navigates the color of the sand, the vegetation and the shape of the terrain, on his way to Moreeb Dune, a colossal sandy slope that towers over a flat plain. Crowds gather here once a year for the day-long Liwa festival, which features 4×4 races through the dune. This year’s event will take place from November 22 to December 4.

On the way back, Almazrouei parks the buggy on a dune above the Liwa Nights camp. Here sticks out of the sand one of the many gigantic bladders that are regularly filled with water to supply the tents. It is transported by truck because locally produced H2O is much too salty.

This is one of the few signs of human influence on the surrounding landscape, which Almazrouei is keen to preserve. Before building the camp, he said he hired 60 people to work for two weeks to remove piles of trash left on the property by people camping for previous Liwa festivals.

He is currently installing dozens of solar panels with the aim of making him 100% dependent on renewable energy. And, he says, he has installed more than 700 palm trees in the past year as part of an ongoing planting program to add shade and encourage wildlife in the area.

And while government officials who worked with him in setting up the camp said he encouraged him to add 10 or 20 tents to the 10 he currently rents out for about $750 a night, he prefers to keep it small — apparently not into making serious money.

“We want to make it authentic and romantic and keep it as a place to come and switch off for a few days,” he says.

Amy Zhao, a US-based engineer who recently had an assignment in Abu Dhabi, is among those who sampled Almazrouei’s hospitality at Liwa Nights — and enjoyed a slightly less leisurely ride in his dune buggy.

“I really like it,” she says. “It’s an exciting and unique experience. The tents were amazing.”

10 common travel blogging mistakes (and how to avoid them)