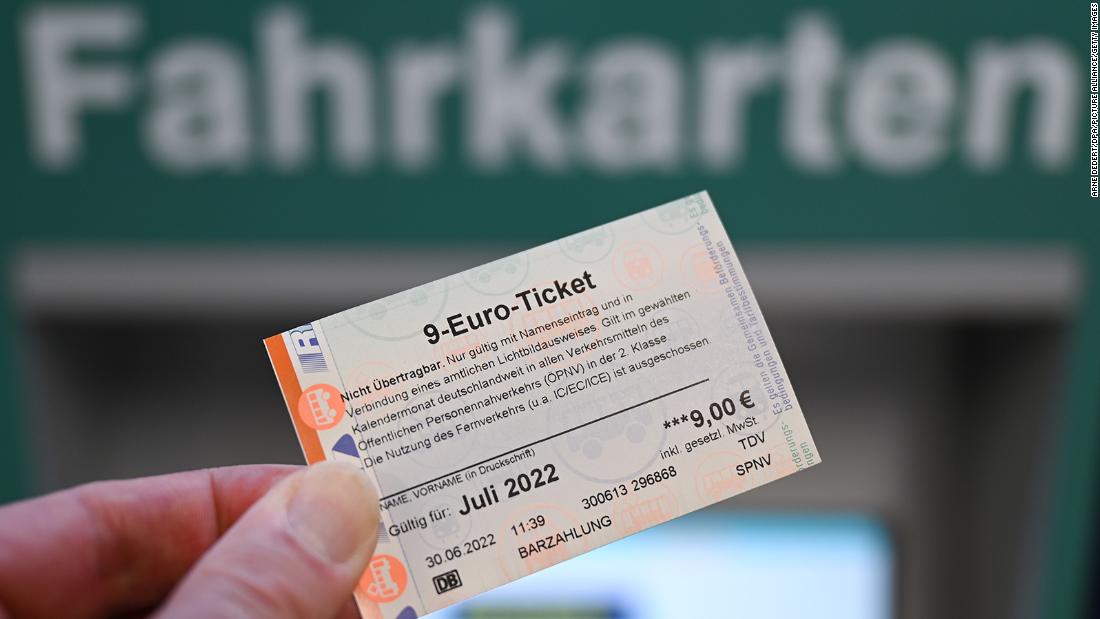 The German Railways Offered Unlimited Rides for a Month for $9. Here’s What Happened

(CNN) — Walking from Brühl city center to the train station, I passed a UNESCO World Heritage. The 18th century Augustusburg Castle — one of Germany’s earliest examples of rococo architecture — attracts visitors from all over the world. Brühl itself, 18 kilometers south of Cologne, has a lovely pedestrianized main street, a large park and the Max Ernst Museum – the artist was born here.

It was never my intention to go to Brühl. I hadn’t even planned to go sightseeing in Germany. I had a connecting night flight through Dusseldorf and planned to do some work at my hotel and then walk around the city.

But then, on the advice of a Dusseldorf airport employee, I changed my mind. I was about to buy a train ticket into town — 3 euros — when he suggested taking the 9 euros (about $9) option. “You could go somewhere,” he said.

On a whim, the writer went to Augustusburg Castle in Brühl.

So I bought it, dropped my stuff at my hotel and went straight back to the train station. The plan was to go to Cologne, just to see the cathedral — because why not, if it’s free? But then I remembered that my family had lived close by, in Brühl, nearly 100 years ago. So after half an hour on the train, instead of walking out of Cologne station, I changed platforms and got on another. About fifteen minutes later I was in Brühl. It was a completely spontaneous trip that allowed me to see my family’s old house.

A trip from Düsseldorf to Brühl would have cost 9 euros one way — for that price I got a return trip and two airport rides, instead of the “real” total of 24 euros. But this wasn’t just about saving 15 euros — for me, the 9 euros ticket gave me an idea of ​​what Germany had to offer. Even in less than a day. Looking forward to going back now. One rococo palace is not enough.

I’m not the only one. Germany’s decision this summer to offer unlimited regional travel for 9 euros a month – which ends in a week, on August 31 – has been a huge success.

According to VDV, the Association of German Transporters, almost 60 million tickets had been sold by the beginning of August – in other words, for May and June.

That includes 10 million monthly subscribers who automatically received the ticket, 21 million tickets for June and 17 million for July.

british travel blogger Alexei Gaynanov had already planned an 11-day trip to Germany when the 9 euro ticket was announced. He had bought an Interrail card, which gave him unlimited train travel — but he says the 9-euro ticket “opened up the rest of the network for us — the metro, trams and buses.

“That made it really easy to get around and took all the stress out of figuring out which ticket to get. It saved us a lot of money, even in the 11 days we spent in the country,” he says.

Air quality in Germany improved by 6% while the 9 euro ticket was on sale.

And it has not only resulted in satisfied customers. A air quality study during the summer for the University of Potsdam’s Center for Economic Policy Analysis showed a “significant drop in the air quality index of more than 6%.”

Author Niklas Gohl told CNN that the effect was “most pronounced in urban agglomerations and areas with a strong public transport network.” And he said it bodes well for the future.

“Our paper documents that a public transport subsidy such as the €9 ticket has, at least in the short term, the potential to promote more sustainable modes of transport and reduce air pollution.”

The project will finish at the end of this month, but it has sparked a movement for more affordable and greener public transport. From September to the end of the year, many of the regional train journeys in Spain will be completely free.

And Germany itself – given the predictions of 30 million tickets sold per month – is now considering a ticket of 69 euros per month.

The ticket was heavily subsidized, but another unlimited travel ticket, which costs more, is an option.

That would amount to 824 euros per year – less than the annual Klimatiket of 1,095 euros in Austria, which allows public transport for a year.

Oliver Wolff, CEO of VDV, says the “momentum” of the 9-euro ticket has “created a situation that we can’t get back to”.

He wrote in a statement that the price of 9 euros was always affordable for three months, and suggested introducing a new monthly ticket for 69 euros.

“The market research commissioned by the government … and other findings provide a clear picture of the possibilities and limitations of a national public transport climate map as a connection solution,” he says.

“We offer a nationwide ÖPNV-Klimaticket (public transport-climate ticket) for 69 euros per month as a right to a single second class journey.”

A spokesman for the German Ministry of Digital and Transport told CNN the ticket was an “assistance” to help cushion the rise in energy and fuel prices. “The coalition must decide to what extent such emergency measures will now be continued. The issue of funding will be crucial,” they said.

They added that when Volker Wissing, federal minister for digital and transport, took office in December 2021, he set up a working group “to work together on an expansion and modernization pact that will be presented at the conference of transport ministers in the autumn.” discussed.

“This gives us the opportunity to make public transport much more convenient and attractive for all citizens,” they said.

Niklas Gohl, author of the air pollution document, says the subsidy amount should be calculated in the long term.

The 9 euro ticket has not always been fun. Travelers have complained about overcrowded trains at peak times, and Gaynanov saw this a lot. “The transport network could not cope with the demand in the already busy summer period,” he says.

“Every train we took was busy, but popular day trip destinations had trains that were almost completely full, with no seats.

“We literally couldn’t get on a train – it was one where the first four carriages go to one place and the last four to another. We had to get into a carriage that was not full and change our destination as a result. “

“Many services in the DB network were experiencing delays due to staff shortages. The solution for me would be to have something similar, but possibly outside of the busy summer months.”

Even I had a taste, on my one day using it. On the way back from Brühl in rush hour via Cologne, there were two guards at the top of the stairs to the platform who advised people where to stand. The train was so packed that some passengers, unable to stand, were in first class.

Whether these additional travelers were locals, domestic tourists or international visitors, drawn by cheap public transport in a summer where air chaos reigns and car rental prices are skyrocketing, remains to be seen.

Figures released in August by the German Federal Statistical Office, Destatis, showed that the number of overnight stays in Germany increased by 60% in June 2022 compared to the previous year. But that figure includes domestic tourists — an analysis of foreign visitors won’t be available until December — and booking sites for foreigners tell a slightly different story. On both trips to Germany lastminute.com and Germany specialist Enchanting journeys were 25% lower this summer than in 2019.

“While there is still a hangover from Covid-19, demand is certainly developing,” said Parik Laxminarayan, CEO of Enchanting Travels and USTO, who predicts 2023 will be “equal to or higher” than 2019.

“While measures such as the €9 ticket have undoubtedly led to an increase in domestic travel within Germany, it has had no effect on our business operations. A cheap public transport ticket can be great for locals, but that’s it not a selling point for an American guest buying a tailor-made trip to Europe,” he said.

Wherever those extra visitors came from, Wolff says raising the price to $69 is the golden ratio — affordable enough to get drivers out of their cars, but not so cheap that millions of random people (like me) clog trains with traces of the minute travel. That arrangement would cost about 2 billion euros, he says.

Falkenlust Castle in Brühl was an unexpected delight for the CNN writer.

And while he hoped the new arrangement could be in effect before September 1, when the current one expires, nothing has been announced so far – and a spokesperson for VDV said there’s no time left to get a new ticket in time for September. to implement.

On August 2, the government called for proposals to better coordinate local transport. And a week before the end of the 9 euro ticket, there has been a new eco-friendly announcement from hydrogen powered trains for a 60-mile track in Lower Saxony.

Will Germany Join Austria and Introduce a Climate Label? So far there is no confirmation.

But with the climate crisis deepening and Europe’s rivers drying up this summer, the success of the 9 euro ticket this autumn will undoubtedly be in the minds of politicians.