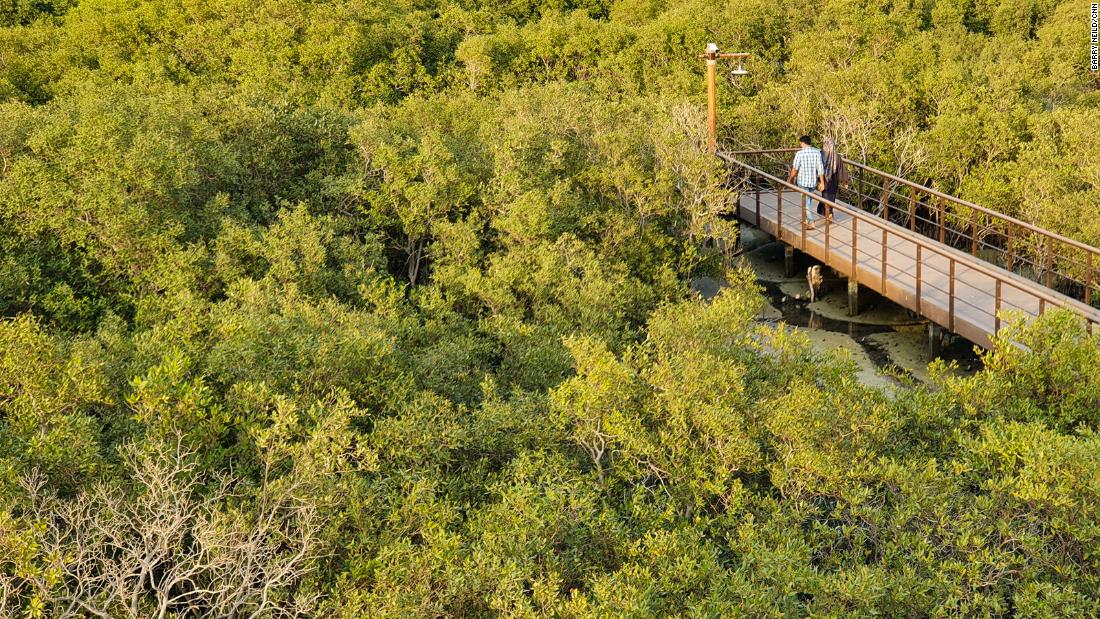 The forest grows in the hottest sea in the world

Editor’s Note – This CNN Travel series is or has been sponsored by the country highlighting it. CNN retains full editorial control over the subject matter, reporting and frequency of articles and videos within the sponsorship, consistent with our policy.

Al Jubail Island, Abu Dhabi (CNN) — An intensely salty sea that warms to planetary temperatures at the height of summer is a hostile place for most vegetation to survive.

But in a corner of Abu Dhabi, where salty waters wash over the sun-scorched coastline, there’s a forest that not only survives, but thrives – creating a natural haven for wildlife and an extraordinarily peaceful escape from the intensity of the desert and cities of the UAE.

Opened as a tourist attraction just before the pandemic, the park now has a beautiful wood-clad reception center and a network of inviting boardwalks that run through the trees and over the water, offering close-up views of the flora and fauna of this beautiful place.

It’s a tranquil world, far from the glittering skyscrapers and heat-ridden bustle of downtown Abu Dhabi, albeit just a short drive away. Visitors can spend hours here listening to the calls of birds, the watery slap of leaping fish, and the lapping of waves.

“Being here is a healing process like yoga, especially at dawn or dusk,” says Dickson Dulawen, an experienced guide who regularly leads kayak or electric boat tours through the mangroves when the tides are high enough to allow small boats to reach the heart of the forest.

“If you’ve had a really bad day, it’s a great place to relax.”

It’s not just humans who benefit from the mangroves’ restorative powers. Scientists say the hardy trees also help restore the planet, absorb and store carbon dioxide, encourage biodiversity and stay one step ahead of climate change.

The Jubail Mangrove Park is an unexpected green escape from the deserts of Abu Dhabi.

The best way to watch the mangroves work their magic is on the water, following guides such as Dulawen in one of Jubail’s brightly colored kayaks. Tours run throughout the day and sometimes at night, depending on the tides.

Dulawen points the way out through an artificial channel, pointing to the crowd of small black crabs scurrying on the sandy beds around the base of the mangroves.

The plants have a symbiotic resemblance to the crustaceans, he explains. They nibble on discarded leaves and hide from predators in the branches, while also spreading seeds and breaking up the dense salty sediment, allowing root growth.

Those roots are something to see. Gray mangroves emit a star-shaped network of cable or anchor roots that then sprout their own mini-forest of tubes known as pneumatophores, which rise above the water like snorkels, allowing the plant to breathe.

Pulling up the kayaks on a pristine sandy beach that only emerges at low tide — a perfectly uninhabited island — Dulawen invites closer inspection of mangrove leaves that seem to be sweating salt. It’s part of the process that allows them to grow in seawater that would be toxic to other plants.

Dulawen points out some other plants that make up the local ecosystem. There is a green and stubby salt marsh samphire, similar to the plant often found as a kitchen ingredient. He says that local Bedouins traditionally used it as a medicine to treat gassy camels or horses.

A yellow flower that blooms on the roots of the samphire is a desert hyacinth, a parasitic plant often harvested for medicinal uses, including, says Dulawen, a natural alternative to Viagra.

In the relentless heat of an Arabian summer afternoon, on the water, the mangroves should be unbearable. But with tub-warm waves splashing over the kayaks as Dulawen gently points to a roll call of plants and creatures, there’s a dreamy quality to the air.

Crab plovers and green herons flutter here and there among the trees and lands to sneak over the soft sediment. In the clear water you can see upside-down jellyfish floating over the swaying seagrass. Dulawen says turtles are frequent visitors.

The gray mangrove roots sprout mini clumps of tubes that protrude above water through which the plant can breathe.

The tranquility of this corner of Abu Dhabi is partly due to the fact that it is off limits to the jet skis and pleasure craft that buzz past other coastal areas. Dulawen and his fellow guides help, diligently cleaning up all the litter and chasing away unwanted guests.

“There is no other place in the UAE that can compare to this,” he says proudly. “The clarity of water, the natural wildlife. It’s ideal.”

And it keeps getting better. Government and private planting programs have resulted in an expansion of mangrove areas in recent years, both in Jubail and the Eastern Mangrove Park in Abu Dhabi. For every tree lost to development elsewhere, three more are planted.

This is an environmental success story, said John Burt, an associate professor of biology at New York University Abu Dhabi, who can sometimes be found paddle boarding around the emirate’s waters as part of his team’s research to analyze the genetic data. of the gray mangrove.

He describes the mangroves as “ecosystem engineers,” who not only build their own habitats, but also create the perfect environment for numerous other species.

And birds are happy.

“These mangroves are a migratory route for many, many species of birds flying between Africa and Eurasia,” says Burt. “In the fall season, we’ll see a lot of birds stop to rest and feed in that area because it’s important not only for providing habitat, but also a lot of energy in the food web from falling leaves.”

There is something else. In our era of climate change, Abu Dhabi’s super-resilient mangroves could hold the key to predicting how environments around the planet will adapt to global warming and rising seas, and help alleviate some of the causes.

They’re important as a “blue carbon sink,” a marine ecosystem that takes in more carbon than it emits, Burt says.

“As long as you don’t disrupt the area with development, that means carbon sequestration. It may have the capacity to offset some of the contributions we put into the air for fossil fuel consumption.”

An observation tower offers beautiful sunsets over the dense forest.

And, the professor says, because they thrive in the abnormally salty waters of desert coastal lagoons that can even become uncomfortably cool in winter for a typical tropical species, Abu Dhabi’s gray mangroves could point the way to species survival elsewhere in the world. world.

His team is looking at specific genes in the local plants that are associated with “environmental robustness,” including resistance to salt and to extreme temperatures, both hot and cold.

“I think that’s useful information to look at a place like Indonesia or Thailand and wonder what’s going to happen to adapt to climate change,” he says.

Mangroves in other parts of the world may have the same strong genes as Abu Dhabi’s trees waiting to be awakened in the right environmental conditions. And watching those genes in action in Abu Dhabi could be a good sign.

“It lets us know that there is hope for these kinds of systems,” Burt says.

Back on solid ground with Dulawen, there’s time for a stroll on the Jubail boardwalks as the sun sets in an orange sky. It’s another peaceful experience, enhanced by a watchtower that offers a view over the dense forest canopy.

In the calm cool of the evening, a few couples and families enjoy the scenery, including visitor Balaji Krisna.

“If you want to blend in with nature, this is a good place and not far from the city,” he says. “It’s the only place in Abu Dhabi where you can see so much green.”

Tags: The forest grows in the hottest sea in the world - CNNtrip
ShareTweet