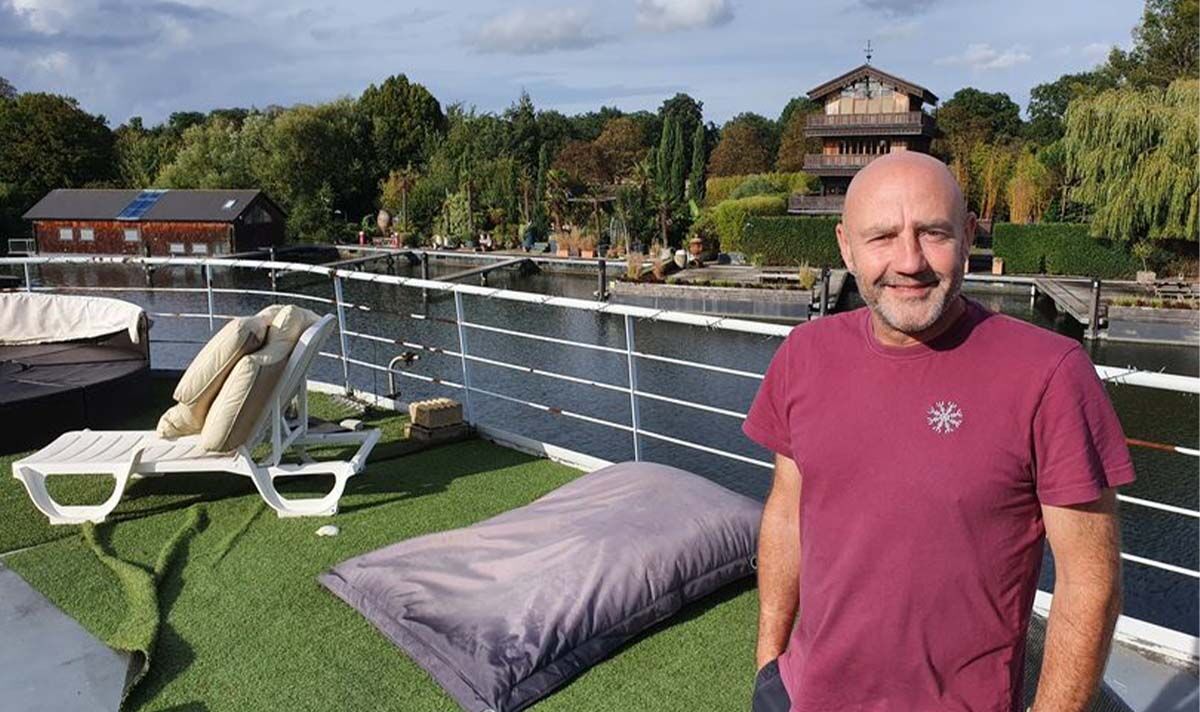 The ‘cursed’ island on the Thames where several owners went bankrupt

Grant Braban bought his current houseboat in 2019 after the previous one was destroyed by fire (Image: Dave Bradshaw / SurreyLive)

A long landmass in the middle of the waterway near Hampton Court Palace, Tagg’s Island is a thriving community of houseboats in a truly charming setting – but some residents still debate whether the place is subject to an ancient curse. The island, which was once part of the Crown Estate, was reportedly bought around 1850 by a real estate speculator named Francis Jackson Kent, who wanted to develop the land and drive out several squatters from it. According to legend, one of those evicted was a gypsy who placed a curse on the island so that those who owned the land were doomed to bankruptcy.

According to SurreyLive, the first alleged victim came in 1852: a local businessman named Joseph Harvey built a beer house and skittle alley on the island, thinking he could make a profit because the area was popular with fishermen. However, the company went bankrupt within ten years.

Next came Thomas George Tagg, a boat builder who turned part of the island into a recreational resort in the second half of the 19th century.

Tagg, from whom the island takes its modern name, made the island famous thanks to this resort, where the houseboats were lit up at night with fairy lights and apparently provided a breathtaking sight. However, shortly after Tagg’s son George took over after his death in 1897, the company was beset by a series of unfortunate events, including flooding, the start of the Boer War and the death of Queen Victoria. decline in business, and he too ran out of money.

Next came theater producer Fred Karno, who is perhaps most famous for discovering a young Charlie Chaplin. Karno opened yet another hotel on the island – this time a luxury getaway called the Karsino with a glamorous ballroom and croquet facilities.

Chaplin apparently performed at the venue before leaving to make a name for himself in America, and Peter Pan author JM Barrie also stayed on the island around this time, but the hotel itself had only been open for about a year when World War I broke out. It also went bankrupt.

Over the next few decades, the island fell into disrepair and had a number of owners. The current majority owner is Grant Braban, 48, whose family owns all but six of the 62 berths on the island. Grant told SurreyLive that his parents first moved to the island in 1969 when his father was bankrupt, and they rented a houseboat for around £6 a month. Initially they only planned to stay for six months, but they fell in love with the place and the family has been there ever since.

Grant’s parents were able to get a houseboat worth £20,000 for just £6,000 from an owner eager to sell. According to Grant, the boat his parents bought had a funky interior that had been used for a photo shoot in Penthouse magazine. They ended up buying almost the entire island of that quirky house in 1980 when Grant was a kid, adding the walkway that gives access to the island in 1981, and excavating the charming lagoon in the center of the island in 1982. several houseboats. now moored.

After spending his childhood on the island, Grant moved to Australia after college and worked there for 13 years as a helicopter pilot. A trip back to visit his mother in 2011 made him remember how charming he finds life in England, and he’s been back ever since. He explains that since childhood the island has become a more expensive and fashionable place to live, but it still attracts a diverse group of residents. A group of house musicians even held their own music festival – ‘Taggstock’ about four years ago.

Grant said, “It kind of languished like an unnoticed little island until about 20 years ago around the time Kevin McCloud [the TV show] Great designs. Suddenly people wanted to live in a nuclear bunker or somewhere in a chimney or in a coal mine, so the island was the perfect thing because houseboats didn’t seem so extreme.

The remains of Grant Braban’s old houseboat after the fire in 2019 (Image: London Fire Brigade)

“The detachment is what I love about the place – we’re close to London, Kingston and Hampton, but people just drive by and nobody sees us. The river is kind of a third dimension because water stops most people, but if you have a boat that allows you to get to all the pubs and shops without the traffic there is a great sense of community too – there is probably no street in london where you know your 30 closest neighbors on each side but here you do.”

Other ancient residents seem to agree. Jane Harte-Lovelace, who first moved to the island 38 years ago, said: “When I first drove across the bridge I knew I had arrived home. The island has a great energy. It’s a very eclectic group of people, our youngest resident is two, and our oldest is 88.”

Indeed, both Grant and Jane had to rely on the community spirit after they lost their home in unrelated disasters in 2019. In Jane’s case, the rusted hull of her home broke down in November of that year and she lost nearly all of her belongings, but thanks to the generosity of her neighbors, she was given shelter on a nearby boat for 14 months while she was back on her feet. That incident happened just three months after Grant’s own boat burned down in August.

“I think it was a lithium-ion battery in something I was charging and it caught fire,” he said. “I had been barbecuing seven boats in just my shorts, T-shirt and flip flops. Then my girlfriend called me and said something was wrong with the boat, she heard a popping sound. It was a wooden structure and it burned down completely, so I lost everything and was severely underinsured.”

Fortunately for Grant, his mother’s property, which lay next to his, was largely undamaged, so he could live there while he found a new boat for himself. Meanwhile, he too relied on the goodwill of his fellow islanders. Despite his misfortune, he says he doesn’t think the alleged curse was to blame.

“I heard someone lifted the curse at one point,” he said. “But either way, the two previous owners before my family both retired happily, so I don’t really believe there is a curse.”