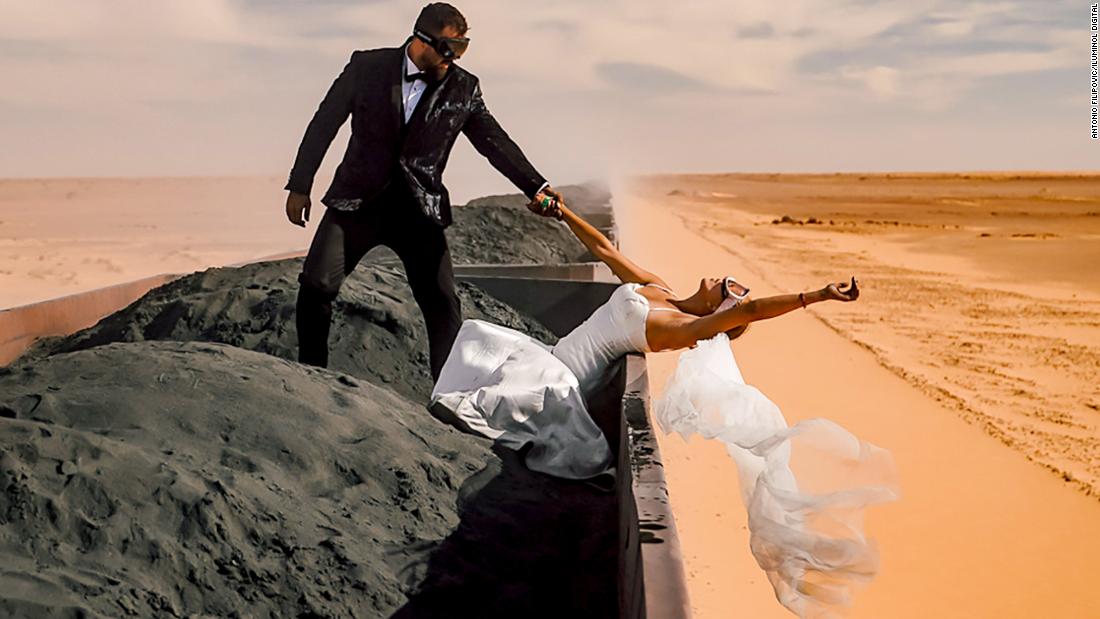 (CNN) — When planning a honeymoon, many couples go for obvious destinations such as Paris, the city of love or the Maldives, with its breathtaking azure waters.

The couple got their unusual post-wedding experience after already visiting dozens of destinations around the world as travel influencers – Kristijan has clocked in at no fewer than 150.

“We’ve really seen a lot,” Kristijan told CNN via email. “This time it had to be something completely different. And we found it in… Mauritania!”

The highlight of their trip was a daring photo shoot atop the iron ore-laden train as it thundered across the desert on its 700-kilometer journey from the mining town of Zouérat to the Atlantic port of Nouadhibou.

The photos were later posted to Instagram, with more than 40,000 likes.

In it, Andrea’s dress can be seen stained with the iron ore carried in the open-topped wagons.

“Everything was full of ore,” Kristijan said. “Clothes, air, food, everything. It was truly a miracle that we kept the white wedding dress (usually) white for the shoot!”

The huge train can be about 200 wagons long.

Riding the iron train across the desert has become something of a rite of passage for extreme travel influencers in recent years, popping up regularly on YouTube and other social media sites.

However, it is not for the faint of heart. The 20-hour drive includes temperatures above 45 degrees Celsius during the day and below freezing at night. Winds also blow up iron ore dust.

Clambering aboard the 200-car train can also be dangerous.

Despite the rigors of their honeymoon photo shoot, Kristijan says the trip to Mauritania exceeded expectations as a welcoming and “underrated tourist destination” despite the fact that there were few tourists.

“It really has a lot to offer,” he said.

“In a village we visited, local people surprised us with a wedding ceremony in accordance with their local traditional rituals. Andrea and I were dressed in their traditional wedding attire and it was a two-hour dance, drumming and singing experience. I will never forget.

“Looks like Andrea and I got married twice!” Kristijan added jokingly.

“It really wasn’t your typical honeymoon, but it was also the trip of a lifetime!” he adds.

Tags: The couple who spent their honeymoon on an African iron ore train - CNNtrip
ShareTweet

Wales tourist tax criticized by readers - 'will not go again'