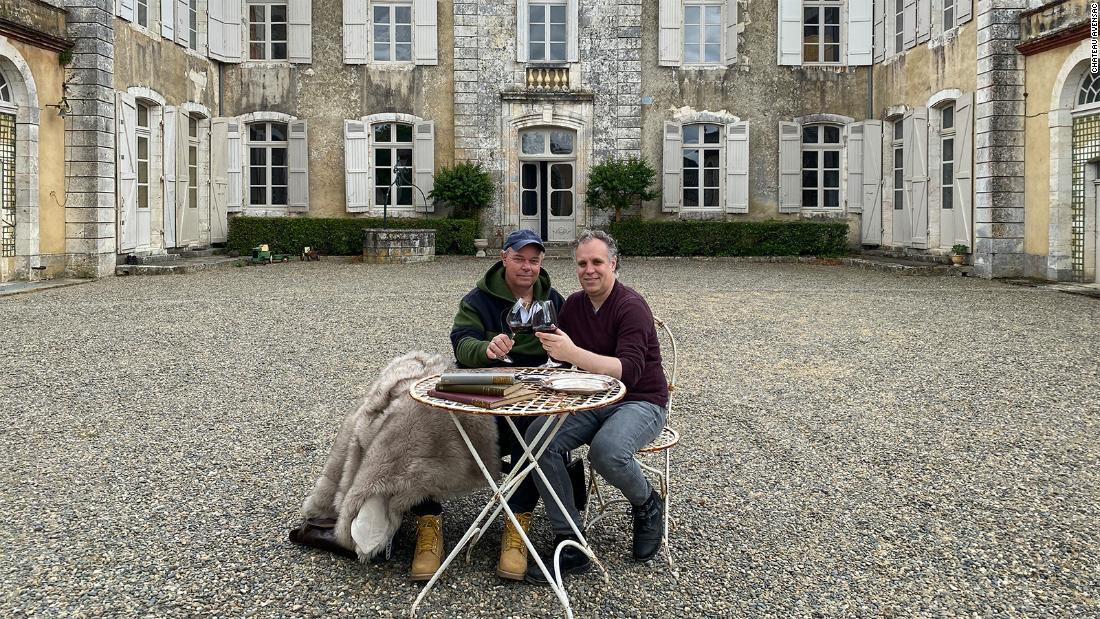 The American couple who bought a 48-room castle in France

(CNN) — After several years renovating a near-finished California home with his husband, the last thing on graphic designer Mark Goff’s mind was to take on another major project.

But curiosity got the better of him when a blog about the renovation of a castle ruins in France popped up on his computer screen and he started reading intently.

Before he knew it, he looked up how much a castle costs and thought how quickly they could sell and move to Europe.

While some may need some time to ponder the prospect of buying a huge neglected property and emigrating abroad, Goff’s husband, data engineer Phillip Engel, didn’t need much persuasion.

“He was in a meeting,” Goff told CNN Travel. “I turned my screen and just said, ‘Do you want to buy a castle in the south of France, restore it and turn it into a boutique hotel or entertainment center?'”

A few seconds after clicking through the photos on Goff’s screen, Engel gave him thumbs up.

Mark Goff and Phillip Engel are the proud owners of Château Avensac, located in the French village of Avensac.

“He went back to his conference call and I started looking at airline tickets,” Goff adds.

Once they made the decision, there was the small task of completing work on their California home, putting it on the market, selling it, finding a suitable castle, and completing the process of moving abroad. run through.

Before taking the plunge, the couple took two “discovery journeys” to France, checking out French mansions on the market to see what was available to them.

However, it would take a few years to get their affairs in order, and the Covid-19 pandemic delayed their move even further.

Goff and Engel were granted visas in late 2020, just over four years after “the click that changed the path of their lives” and moved to the south of France in December while the country was in lockdown.

When business reopened, they were able to view properties, concentrating their search on Gers, a rural region in southwestern France.

Unfortunately, their original choice fell through, but they soon found a listed historic castle in the small village of Avensac, with less than 50 inhabitants, that met all the requirements.

“We fell in love with it,” says Goff. “The castle itself is great. The situation it is in is great.”

‘Lords of the Castle’

The chateau has about 48 rooms, including a billiards room, a library and a wine chai.

After making an offer in March, they became “the lords of the castle” in September 2021.

Chateau Avensac, which measures about 1,200 square feet, with just under 3 acres of land, costs about $1.2 million, including taxes. The deed they signed goes back about 700 years.

According to Goff, the previous owners were three siblings who inherited the property from their father, a French count.

“They had grown up in that house, so it was very difficult for them to let it go,” he explains.

Although the castle was apparently built in the early 1800s, it was actually built on the site of an older castle from the 14th century. It has about 48 rooms, including a billiards room and a library.

Though they consider themselves ground zero, Goff and Engel have big plans for the property, which needs a lot of work.

Neither of them have great hospitality experience, but they certainly don’t lack ideas.

“We don’t want to just make a boutique hotel where people stay overnight,” says Goff. “Our goal is to create events where you come to the castle, stay for a week and do things.

Goff and Engel plan to turn the property into a boutique hotel and entertainment space.

“Each week will be all about some kind of focus. It’s all about creating that fantasy and an experience. The fantasy is the most important part.”

They believe the property would make an ideal wedding venue and would like to host weddings in the future.

“Our target will be Americans, of course, because that’s what we know,” Goff added, before adding that they’d like to step outside their comfort zone in due course.

While it will take a lot of work to give the castle a makeover, the couple say they are determined to preserve the essence of the place.

“We’re for restoration, not renovation,” explains Goff. “So we keep track of every detail that there is.

“That’s part of what attracted us to the property. It hasn’t been tampered with. The setup is just so great. We don’t have to add anything. We just recreate what was already there.”

Although the chateau is “definitely in the countryside”, it is relatively easy to get to, with Toulouse-Blagnac International Airport about a 45-minute drive away.

When they arrived during the pandemic and rented a house outside the village during the buying process, Goff and Engel didn’t get a chance to meet the locals for a long time.

The couple say they plan to do most of the “core work” themselves.

“I think at some point it became known that the castle had been sold and that these Americans were coming,” Engel says.

Wanting to make a good impression, they invited their new neighbors to celebrate the day they signed the contracts.

“We threw open the doors and said, ‘Go in.’ And people were like ‘really?’ We told them to roam and have fun,” says Goff.

They were delighted when several locals showed up and began exploring the grounds.

“The previous owners were very private,” Engel explains. “Some of them [the villagers] had lived in the village all their lives and had never been inside.”

Goff and Engel have since organized a Halloween party for the entire village, saying they want the locals to feel involved in their castle experiment.

“Of course, it’s our house,” says Engel. “But in a way, it also belongs to the community.”

But it wasn’t all parties and celebrations for the couple, there was plenty to deal with.

While planning to do most of the “core” work on the castle itself, Goff and Engel bring in craftsmen to handle the infrastructure side of things.

They have recounted their renovation adventures on their blog, In the castleand also have a Youtube Channelwhere they plan to host live streams of Chateau Avensac.

“We’re trying to find a way to present ourselves a little differently on YouTube and keep people more engaged,” explains Goff. “We don’t want to be talking heads.”

One of the tasks they have focused on is adding private bathrooms to the bedrooms.

They are currently working out their plans with an interior designer and describe their style as ‘traditional with a little bit of surprise’.

Making the most of life in the French countryside, Mark and Phillip say they have been embraced by the locals.

“The bathrooms are all designed to be very classic, because a bathroom never existed (when the castle was built),” says Goff.

Some of the fixtures they looked at were modeled after the first photos of the Waldorf Astoria New York.

Goff and Engel eventually plan to install air conditioning in the bedrooms. However, the suggestion of this has raised eyebrows in their village.

“There’s a feeling here that you don’t need air conditioning,” says Engel. “I mentioned it to the previous owner and she looked at me a little strangely. But we expect a lot of Americans, and they expect certain things.”

For now, they manage by keeping the shutters open a few centimeters during the day in the summer and opening them at night, which is apparently a more typical approach to castle life in France.

Although they have a very specific design vision, Goff and Engel admit that their budget may not extend as far as they expected

“The work turned out to be a lot more expensive than we thought,” said Goff, explaining that he and Engel used the money left over from the sale of their California home to pay for the renovation.

“If we had been wise, we might have bought a castle a little cheaper,” Engel adds.

“And then we would have had enough money to do the renovation really well. But we are not wise, so we had to go the other way.”

That “other route” involves rolling back several projects until they have the money to complete them.

Goff and Engel hope to be able to open some rooms at the castle next year.

One of the plans they’ve had to postpone is to transform their wine chai, an outdoor wine storage area, into “a huge entertainment dining space with a stage and stage lighting.”

“It will be a great addition because then we can keep big nighttime things indoors without disturbing anyone,” Goffs noted.

They found it difficult to book some of the construction work as contractors in the area have been under siege since the pandemic and are simply too busy to get on board.

Understandably, the language barrier has also proved to be a challenge. Although they both speak some French, it proved rather difficult to have full conversations with French contractors, which slowed things down somewhat.

But while the renovation process hasn’t been as easy as they would have liked, the couple are confident they’ll be able to open a few rooms next year.

“We hope to get something on track by 2023 to bring in a little income to continue supporting progress,” explains Goff. “We want to do some trial events to get our feet on the ground.”

For now, Goff and Engel are enjoying life at the castle and say that every day is an adventure for them.

“This is the part we love,” Engel says. “It [the chateau] It’s a bit glued together, but it’s livable and we got through the winter with our limited heating system.”

As they look forward to finally welcoming guests to Chateau Avensac, they enjoy having the place to themselves and slowly but surely seeing the fruits of their labors.

Correction: An earlier version of this story was wrong in the story and headlined the number of bedrooms in the castle.

This Italian airline just got a brutal new look