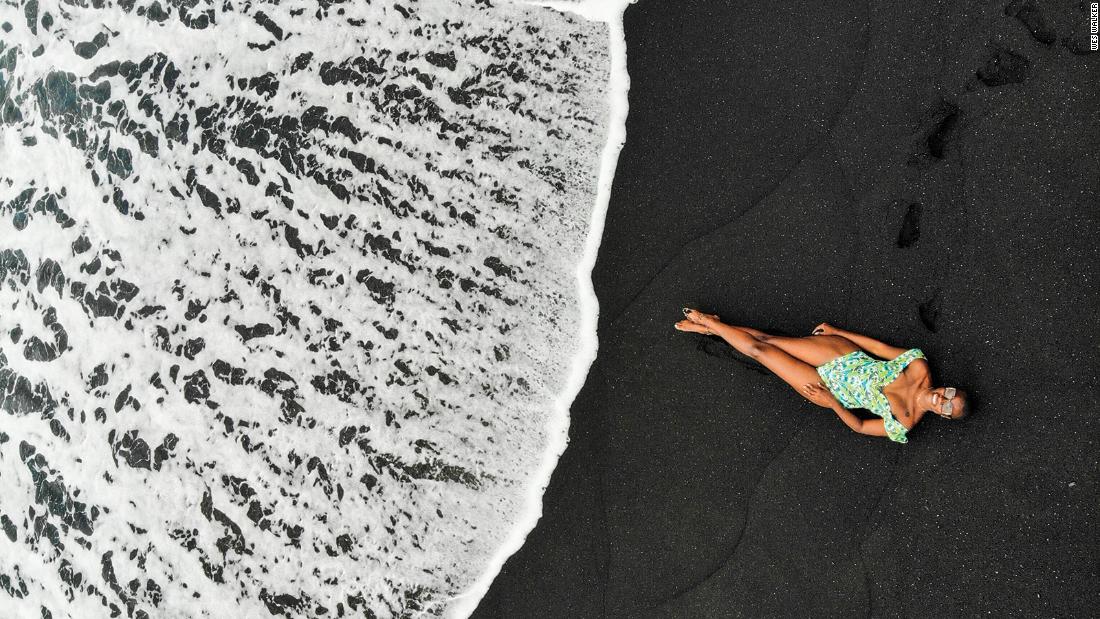 She has visited every country in the world. This is what she learned

(CNN) — As her plane began to descend for the Seychelles on October 6, 2019, Ugandan-American travel influencer Jessica Nabongo peered out the window, preparing for the momentous occasion that was about to take place.

Not only was she about to join a prestigious club made up of the very few people who have traveled to every country in the world, she would be the first black woman to document this.

Nabongo was joined by 28 of her friends and family, who had flown in to travel with her on that last flight.

It had taken more than 450 flights and more than a million flying miles, but it had reached all 195 UN-recognized countries in the world.

The experience was exhausting — Nabongo made more than 170 flights in one year and says she nearly stopped several times.

“There were a number of times when panic started and I thought, ‘Oh my god, will this result in a public failure?'” she tells CNN Travel.

In 2019, Jessica Nabongo became the first black woman to document travel to any country in the world.

Nabongo has since written a book, “The Catch Me If You Can,” in which she describes her experiences traveling from country to country during the epic challenge.

Named after her popular blog, it recounts her record-breaking journey, focusing on 100 of the 195 countries she visited.

“I’m a geography geek,” Nabongo says of her decision to take up the challenge, explaining that she’d wanted to do this for ten years before actually trying it.

So, was she able to meet her deadline?

“I have passed my birthday by five months,” explains Nabongo. “But in the end I ended up on my father’s birthday. He passed [away] just two days after my 19th birthday, so it was nice to be able to bring him into the herd that way.”

According to Nabongo, who was born in Detroit, one of the main reasons she felt compelled to write “The Catch Me If You Can” was due to the fact that there are very few black people among the 400 or so travelers. which is said to be every country in the world.

“We’re so used to seeing the world through the lens of white men,” says Nabongo, who has used her own photos in the book. “And this is different. There is clearly something unique about the experiences that we have, as we exist in the world, as very different people.

“But also, just in terms of how I see humanity. My respect for humanity. I see a huge difference.”

Nabongo elaborates on her experiences traveling as a black woman in the book, which was released on June 14, noting that such representation is extremely important.

The travel influencer has released a book, “The Catch Me If You Can,” which showcases 100 of the countries she’s visited.

“It’s about normalizing our existence because yes, even in 2022 I am often the only black person on a 300 plane,” she writes.

“I can travel for days and never see anyone on the same side of the color spectrum. My mission is to create space. To shake things up. To say, we’re here and we belong.”

She feels a responsibility to represent destinations that are not necessarily tourist hotspots as sensitively as possible to break through prejudice.

“That’s very important to me,” she admits. “Telling stories about places most people might never travel to and really using my platform to show these places in a more positive light than we usually see.

“I’ve found a lot of beauty in many places that people probably didn’t expect.”

These places include Afghanistan, where she was enchanted by the shrine of Hazrat Ali, also known as the Blue Mosque in the northern city of Mazar-i-Sharif, Pakistan, where she couldn’t get enough of the street food, and Iran, where she visited the ancient city of Yazd.

While social media was certainly around when Nabongo first traveled widely, it wasn’t as influential as it is today.

The former UN employee notes that having a successful blog and over 200,000 Instagram followers has given her many privileges, especially when it comes to travel, but she is very aware of the content she shares, acknowledging that the impact of social media is not entirely positive when it comes to vulnerable locations.

“When I was in Maui [Hawaii]I really loved this bunch,” she says. “I didn’t geotag [add the geographic coordinates of the location] because I know what that could have done to that forest.”

“As an influencer or someone with influence, you have to be incredibly careful about how you share. For me it’s very important to make sure that the places I visit are preserved.”

Nabongo during a trip to Bali, Indonesia in 2017.

Nabongo is wistful at the idea of ​​’blind travel’, noting that this has become nearly impossible in the modern world.

“It’s definitely something I particularly miss,” admits Nabongo, citing Peru as one of the destinations she was somewhat impressed with simply because she’d seen so many images of the historic sites beforehand.

“When I got to Machu Picchu, I thought, ‘Oh, it looks exactly like the pictures,'” she admits. “So it was disappointing.

“You think of places like Bali and Morocco, everyone goes to the same destinations and does the same things. And that’s just not interesting to me.

“But there is Yemen, Afghanistan and South Sudan. There are so many places that people don’t think are valuable in terms of tourism, where I had an absolutely wonderful time.

“I really hope that my stories will reduce prejudice about black and brown countries in particular.”

During some of her toughest moments on the road, Nabongo began to wonder if she would make it to the Seychelles, the last country on her list.

But the journey by then had become much more than just achieving her goal – she knew she was showing places her followers probably would never have considered visiting.

When she reached her breaking point during a visit to Mali, a landlocked country in West Africa, it was the words of some local residents that convinced her to keep going.

“One of the guys said, ‘It’s not for you. It’s for us.'” she says. “That was a really huge turning point. As my audience grew and people were emailing and DMing me, I realized that the journey was getting so much bigger than me. Those guys really helped me get to the finish line.”

While Nabongo notes that having a US passport grants her privileges not accorded to travelers of other nationalities, she explains that her Ugandan passport allowed her to travel to more than 40 countries.

Thanks to her dual nationality, Nabongo was able to obtain a visa on arrival to visit Iran.

“Having both a US and Ugandan passport really worked in my favor,” she admits. “Because it’s super hard for Americans to go to Iran.

And the US government is banning Americans from going to North Korea [exceptions are granted “in very limited circumstances”, but I had a Ugandan passport so I could go.

“That was my secret weapon. If I only had an American passport, I probably wouldn’t have finished when I did.”

Her success, along with that of other travelers like her, will no doubt have inspired others to attempt to travel to every country in the world, but she’s keen to point out that this particular goal isn’t for everyone.

Before jetting off on such a quest, Nabongo stresses that travelers should really question why they want to embark on this challenge, “because that’s the motivation that’s going to get you to the finish line.”

She hopes her story will encourage others to go after their dreams, whatever they might be.

“I don’t think everyone is interested in going to every country in the world,” she says. “But what I do want people to know is that they have everything inside of them to do whatever it is that they want to do in life.

“And if I could go to every country in the world, which is wild, I feel like everyone’s dream is attainable.”

Nabongo’s thirst for adventure has remained strong since ticking all the countries in the world off her bucket list.

In “The Catch Me If You Can,” Nabongo shares various tales of strangers who’ve been particularly kind to her during her travels, including a tour guide named Maha in Jordan who gave her a dress as a symbol of their friendship.

“I definitely have friends from all over the world,” she says, before expressing her delight at how writing the book has helped to put her back in touch with many of those she’s met on the road.

“It’s been really great,” she adds. “At any given time on my WhatsApp, there’s probably conversations going across 20 countries.

“People, of course, will always start out as strangers. But if you’re open to it, you can quickly make friends and in some cases, even family.

“For me, home isn’t about people. I think that’s why I feel so closely connected to people when I travel. Because it’s like I’m building little houses all over the world, if you will.”

While she found the process of visiting every country in the world grueling, Nabongo confesses that writing “The Catch Me If You Can” has been harder “hands down.”

But she hopes the book will inspire more kindness in the world, explaining that she’s noticed a shift in the behavior of others, particularly while traveling, since the early days of the pandemic.

“It was all love and kindness, and then it became madness,” she says. “Now you’re seeing people fighting on planes and being just really mean.

“So, I think unfortunately, that initial bump of love and humanity that we got in the first four to six months has dissipated.”

Nabongo admits that this has left her feeling rather disheartened at times.

However, she remains encouraged by her own experiences of human kindness and continues to look for beauty in the world wherever she goes.

And now that she’s visited every country, Nabongo’s passion for travel has only grown stronger.

At the time of writing, she’s about to take another trip to Senegal, which she describes as her “happy place,” and eventually plans to tick off another goal. visiting every state in the US.

“I have six left,” she explains, before stressing that she’s in no rush, and will complete this particular task, “when I get to it.”

Tags: Jessica Nabongo: What I Learned From Traveling To Every Country In The World - CNNtrip
ShareTweet