Pamukkale was a place we had heard the name of, but didn’t know much about. We are quite light on schedule at the best of times and as it was a short trip most of the focus had been on seeing the ‘big three’ – Istanbul, Cappadocia, Ephesus – then visiting our family friends in Alacati for the last few days. All we knew about Pamukkale was that there were some hot springs (well, we love that), some ruins (history and culture – good too) and a hill covered in white stuff called Cotton Castle (confusing – better check it out! ). So with that knowledge we devised a one night stopover to have a quick look around on the road from Cappadocia to Alacati – job done! But then we got a message from Koray, a local Pamukkale resident who saw our Facebook and decided to show us just how much the town had to offer! He even offered to organize our accommodation and put us through to the local mayor’s office! This sounded great, so we added an extra day to our time in this now slightly more intriguing place.

How to get to Pamukkale

Getting to Pamukkale from Cappadocia was easy, we just flew from Kayseri airport to Denizli airport. Internal flights are extremely cheap in Turkey and can cost as little as $20 each way, or even less if you book far in advance.

Check out some of the cool and cheap tours you could do in Kayseric.

Buses are also very good in Turkey and you can travel around the country very cheaply and comfortably. One of the best companies is Pamukkale Turizm, with which we used to travel to Izmir.

Check the location of your accommodation as most of the more expensive hotels are not in Pamukkale itself but in one of the 2 nearest small towns, all of which are 5 minutes apart. Getting around is easy with local minibuses that run back and forth all day, costing just a few lira.

When we arrived at Denizli airport, Koray had arranged a private airport taxi for the one hour ride to our hotel in the small town of Karahayit, just a few minutes from Pamukkale itself. You can also take a group shuttle from the airport, which is a lot cheaper.

Our hotel in Pamukkale

Check prices and availability of hotels in Pamukkale in Booking.com

Koray and the Pamukkale mayor’s office really had the best accommodation organized for us in the whole area! Probably the newest five-star hotel in the region, Doga Thermal Hotel and Spa is built like a modern palace, designed around a central pool, spa and natural outdoor thermal pool. 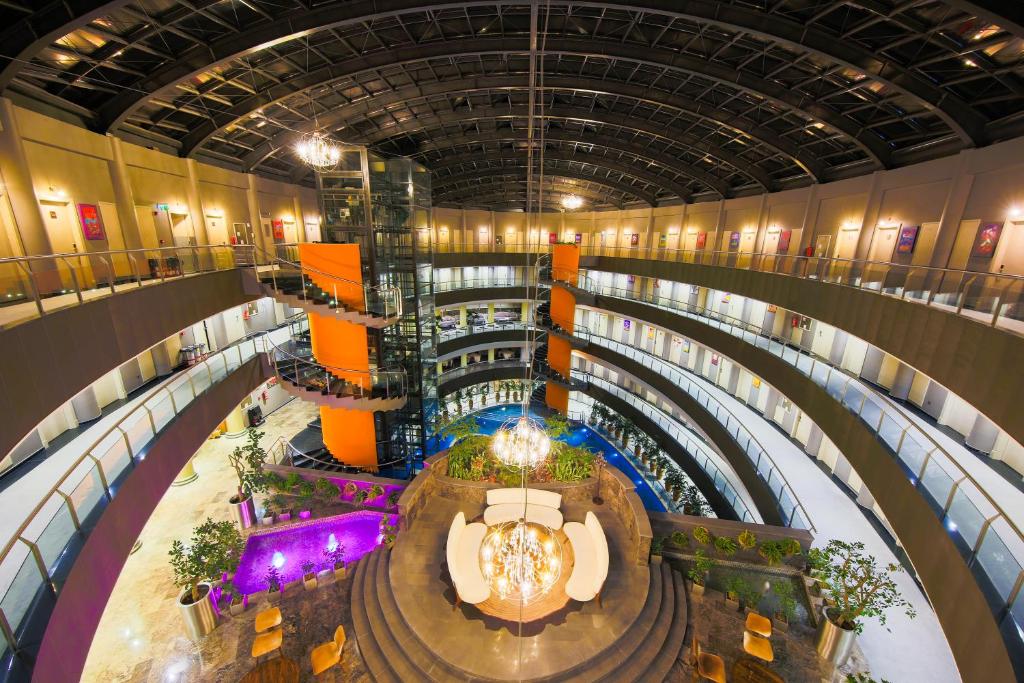 The hotel consists of 5 floors of luxurious rooms arranged in a large oval around a five-storey atrium that illuminates the indoor pool and Jacuzzi spa in the center. 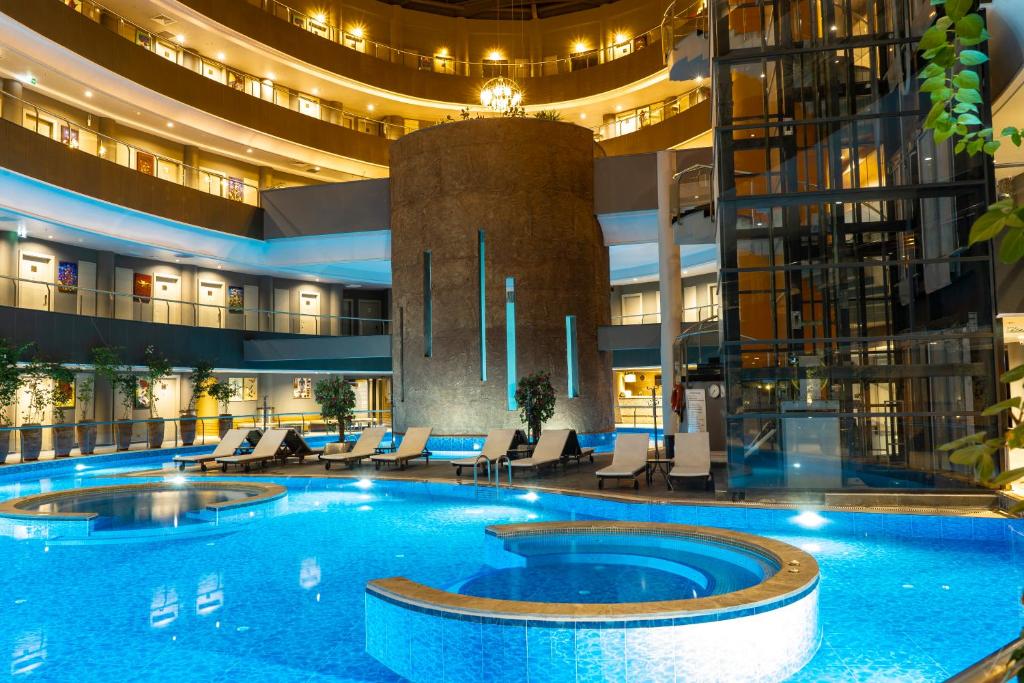 On the ground floor is a spa with a dry sauna, Turkish bath, ice fountain and even a salt therapy room! The real attraction, however, is outdoors – the huge thermal pool is always at least 40 degrees Celsius and is fed by the natural hot spring that runs beneath the entire area. According to locals, studies of the water here have shown that its beneficial mineral content has doubled compared to thermal springs in other more well-known European countries. People of all ages come here to take advantage of the natural health properties of the water here, often in combination with other treatments such as physiotherapy. 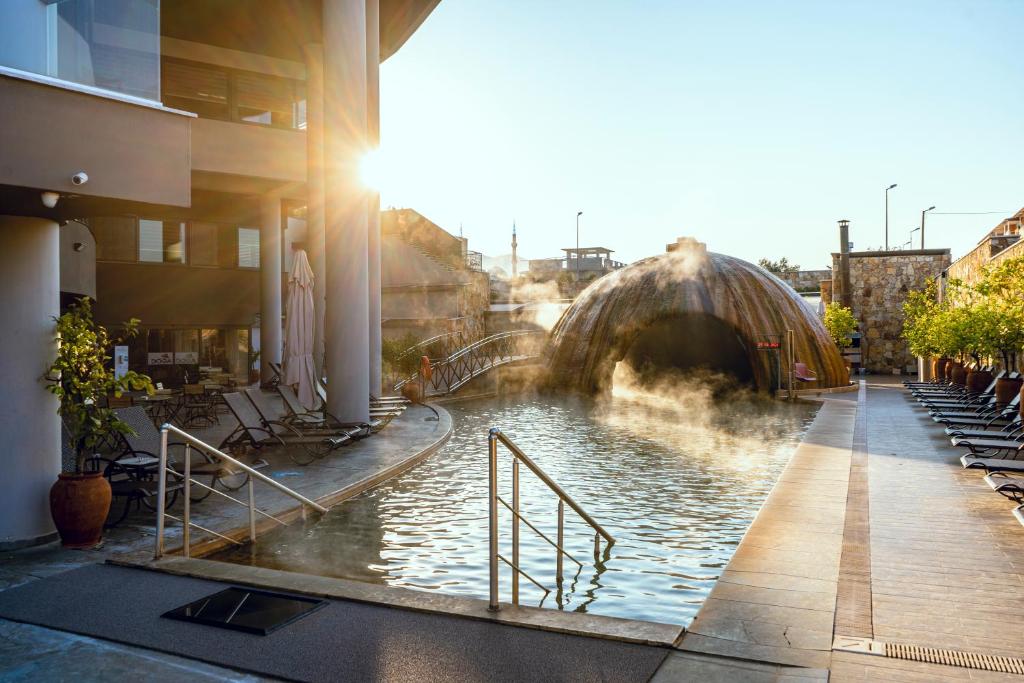 Our room was very large with a private balcony and fully equipped, such as climate control and cable TV. The bathroom had a solid stone design sink, a rain shower and a bath with a window to the bedroom (in case you want to share…).

Dinner at the hotel restaurant was a big buffet with all kinds of local Turkish and international dishes, plus an amazing array of colorful deserts.

The breakfast was just as amazing, with real homemade Turkish yogurt and natural honey that looked like it had been taken straight from the beehive!

Meeting with the Mayor of Pamukkale

The next day, Koray arranged a meeting with the mayor of Pamukkale for us to learn a little more about what makes the area so special.

We spent the whole morning in the outdoor thermal spa, relaxing and trying to absorb as much of the magical minerals as possible to keep us going until the next thermal spa we find!

Our meeting with the mayor took place in Denizli, the nearest administrative town about 45 minutes away on the same minibuses that take you around the area.

First we met Arkan, the mayor’s right-hand man, who explained that this was the first year Pamukkale was run by their own mayor and that they had many big plans for the area. First and foremost, they plan to do a major clean-up of the area, restoring it to its state of natural beauty while developing the area into a center of natural health and wellness. This includes connecting all the different areas through trails, bike paths and nature walks, as well as promoting the area for outdoor adventure sports. So it sounded like there were a lot of big plans underway that would cover all the things we noticed in the area – mainly that there was a lot of really cool stuff here but the whole area is very fragmented and in need of some work to get some rough edges to smooth out those caused by poorly managed developments in the past. The mayor himself seemed to have an open door policy, which meant that any of his constituents could come and visit him to voice any concerns. When we met him, he was very eager to let us know what direction the area was going in and that they would start promoting the area much more as a tourist destination in the not too distant future.

All in all, it was interesting to hear what the new mayor’s plans are for the area and that we can hear a lot more about Pamukkale in the near future.

That evening we retreated to our hotel, to the delicious buffet and the warmth of the healing waters!

Surprisingly, although we really enjoyed our time in Pamukkale, we hadn’t yet seen the area’s two main attractions – the travertines of the ‘Cotton Castle’ and the ancient city of Hierapolis, both designated as UNESCO World Heritage Sites.

Check out some of the cool and cheap tours you could do in Hierapolis.

The main attraction of Pamukkale is undoubtedly the vast white terraces formed by the flow of natural, hot spring water that is so oversaturated with calcium and minerals that it has been deposited over thousands of years. They are a spectacular place, resembling snow even from a distance.

You can climb the travertines for an entrance fee of about 50 lira, which includes entry to Hierapolis at the top. The only rules are that you must take off your shoes and only walk or bathe in the permitted areas in certain permitted pools. Apparently the area has been heavily damaged in the past by hotel developments and even a real road (?!) all built right on top of the site but these have all been removed and the site is now highly protected.

The water is warm, silky smooth and full of minerals that you can collect in your hand from the bottom of the pools and spread like a paste over your skin so you can almost feel your skin absorbing the goodness!

The walk up is gentle and quite easy, the solidified calcium provides enough grip under your bare feet. There are plenty of places to stop and swim and few where you have to watch out for slipping.

Turning around as you climb the slope will give you a spectacular panoramic view of Pamukkale’s natural landscape.

At the top of the travertines, you can put your shoes back on as you catch your first glimpse of Hierapolis. Very little is known about the beginning of the city, only that there is no evidence that Persians have been here and that here on the 3rdrd century BC. What then grew into the city of Hierapolis became a thermal spa and healing center to which doctors sent their patients, many of whom felt so rejuvenated that they retired there. Interestingly, the new local government is now working to revive Pamukkale as just that – a center for natural healing.

You could easily spend a few days exploring the city, but the main buildings are the main street, the Frontinus Gate, the 50-row theater, the Temple of Apollo and ancient baths, including Cleopatra’s pool and the ancient pool.

Hierapolis may not share the size or fame of Ephesus, but the experience here is actually much more enjoyable, thanks to natural wonders such as the travertines and the hot springs, but mostly because you can meander through many of the ruins without feeling like livestock thorough from entrance to exit – you have the time and freedom to explore and experience where you are, imagining what it would have looked like almost 2000 years ago!

(Ephesus tip – Get there early and enter through the Harbor Street entrance to see most of the site before the big tour groups arrive!)

We highly recommend that you spend more time exploring this underdeveloped tourist spot of Pamukkale, which, if all goes as promised, will only get better in the years to come!