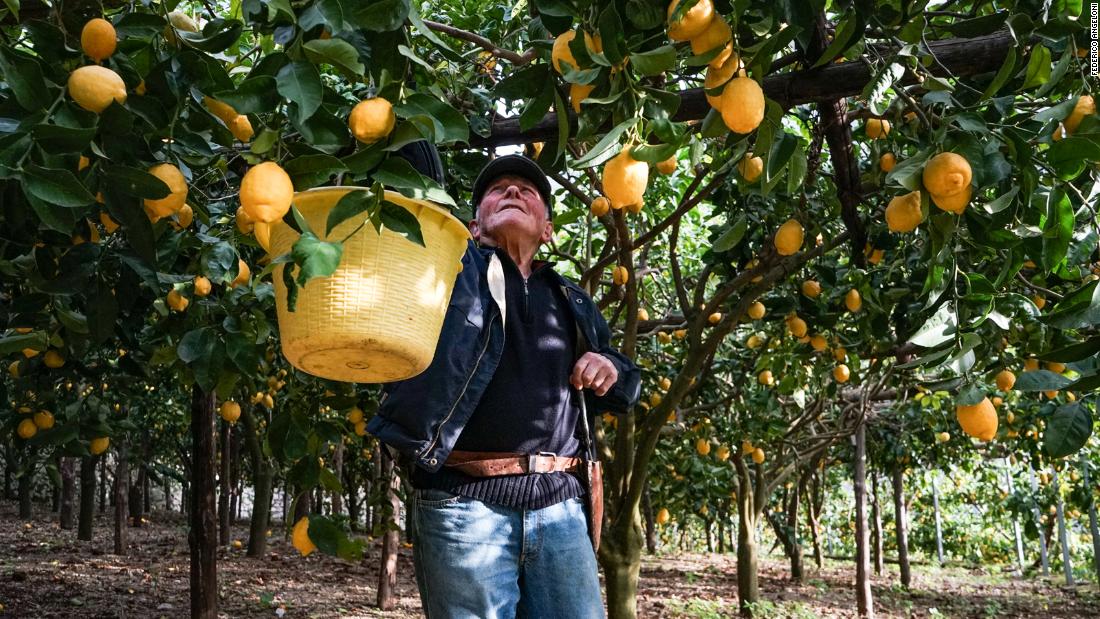 Editor’s Note — Join CNN Travel’s Unlock Italy Newsletter for insider information on Italy’s best-loved destinations and lesser-known regions to plan your ultimate trip. Plus, we’ll get you in the mood with movie suggestions, reading lists, and recipes from Stanley Tucci.

Balancing between one wooden pole and the other, the not-so-young acrobat defies gravity, bending over to pick lemons and transport them in crates over 25 kilograms (55 pounds) between vertical gardens over 400 meters (1,312 feet). ) above the ground .

A strong aroma of rosemary surrounds it, mixed with jasmine, sage and of course the unique bittersweet scent of citrus. The sound of waves below masks the hum of car traffic and the noise of tourists in the main square of the UNESCO-listed town of Amalfi.

“Not blood, but lemon juice runs through my veins,” says 87-year-old farmer Gigino Aceto, whose family has been growing lemons here since the 1800s.

From dawn to dusk, Aceto’s life revolves around lemons. He sleeps in his lemon orchards and feeds on lemon food. He was even conceived among these plants.

“In the old days of my parents, the lack of space and intimacy meant that love was made outdoors, under the citrus trees,” he says with a smile.

Low hanging fruit: The Amalfi lemons are known for their large size.

The lemons are the beating heart of the area’s complex, biodiverse ecosystem, which has remained unchanged for centuries. But Aceto is one of the last guardians of this fragile tradition now threatened by industrialization, societal changes and climate change.

The large Sfusato or Amalfi lemon is grown in an area stretching along the Tyrrhenian Sea between Naples and the Gulf of Salerno. A single lemon can weigh up to three kilograms.
About 2,000 tons are currently harvested annually around the Amalfi Coast, according to local figuresbut studies show that these lemon groves have fallen into disrepair over the past 60 years.

“In Amalfi alone, lemon terraces decreased from 72 hectares to 48 hectares between 1954 and 2015, while wild forests and urbanization increased significantly,” said Giorgia De Pasquale, an architect and researcher at Roma Tre University, who is looking is looking for ways to protect the family. lemon growing companies.

“The process that takes place in Amalfi is identical all along the coast,” she says.

A cure for everyone

With its pale yellow color, intense fragrance, juicy texture and sweet skin – it can be eaten sliced ​​like an apple – the Sfusato has become a staple in the traditional cuisine of the area.

It is used in pasta dishes, sauces for salads and grilled fish, desserts – not to mention Italy’s famous Limoncello liqueur. And because of its properties — it’s rich in vitamins C, B, E, potassium and magnesium — coastal residents have found countless uses, from cleaning clothes to natural medicines.

“The first thing we do when we wake up with a headache is put a little lemon zest in our morning coffee,” explains Aceto. “When we cut ourselves, we run to get a lemon to sanitize. When we feel sick, there’s nothing lemon spaghetti can’t fix.”

brought here In the early Middle Ages, during trade with the Arabs, lemons were once used by sailors, especially in Northern Europe, to combat scurvy. They also played a role in the fight against cholera in Naples in the 1950s.

But it’s not just the nutritional and pharmacological properties that made the Sfusati so fundamental to the area. The traditional farming system – a remarkable 15th-century example of man and nature working in harmony – has proven to be resilient to climate change instability.

The orderly architecture of the lemon groves forms the wild cliffs overlooking the sea and curbs some of the area’s biggest problems, including landslides caused by rain and wildfires.

“Farmers provide a systematic service to the entire area, protecting the coastline from landslides and other environmental disasters,” says De Pasquale. Without this agricultural activity, she adds, the Amalfi landscape and the entire coastline would disappear and deteriorate year after year.

Arranged vertically in layers, the lemon groves are separated by three to seven-meter walls made of Macere – a local limestone resistant to soil pressure and impervious to rain. Even today, the forest can only be reached on foot or with mules.

The terrace system uses gravity to direct rainwater to irrigate the plants.

Poles of local chestnut wood are used to create a jetty around the lemon trees and allow the “flying farmers” – as they have been called by Italian writer Flavia Amabile — to walk on the trees for pruning, harvesting and maintenance. Plastic sheets protect the lemons from offshore wind and create an ideal microclimate.

“Everything works perfectly in synergy with the land,” says Salvatore, Aceto’s 57-year-old son. Nevertheless, he says, farmers are fighting a constant battle against man-made problems, not least the scorching temperatures that are attributed to climate change.

“With the frequent fires in the summer, it’s a disaster,” he says.

“Maintaining the land must be a collective work. The terraces are connected to each other. But today they are either abandoned or turned into holiday homes and illegal constructions.”

Low profitability and high costs of the traditional farming system have driven more and more Amalfitans from the land, causing walls to crumble. Tourism, which has risen to problematic levels in parts of Amalfi, has given them another, perhaps easier, source of income.

“It’s hard work here, not like in the valley, but nobody wants to work hard anymore,” says Salvatore Aceto, his dialect firmly Neapolitan. “At the same time, they use cheaper methods, such as cement [or] lime, which affects the landscape, prevents drainage and causes landslides.”

In Minori, a town on Italy’s Amalfi Coast, Stanley Tucci tastes lemons he calls the best in the world.

There is a risk, he says, that when his generation stops working the land, the knowledge accumulated over the centuries by local communities could disappear altogether.

“Most tourists who come to Amalfi are not aware of this system across the main road,” explains De Pasquale, cutting farmers off from the tourist dollars pouring into the region.

In an effort to solve that problem, Salvatore and his brother Marco, 56, have a Lemon Toursan agricultural tourism venture to raise awareness of the Sfusato and revive the traditions used to cultivate it.

They lead groups of up to five people, spending hours on terraces built over a thousand years ago, teaching them culinary skills such as cooking a dish with lemon Scialatielli or processing local honey.

“It’s helpful to have a certain view of the Amalfi Coast, but we don’t bow to tourists and don’t interfere with our business,” Salvatore says. “We are farmers, and this is what we show.”

“At 5:30 am, my clothes are dirty and my knees are exhausted. It’s a job that destroys you. These are two faces of Amalfi — the one you want tourists to see,” he says, pointing the slopes toward the city below. “And the real, the real life of the farmers.”

“Something has changed downstairs.”