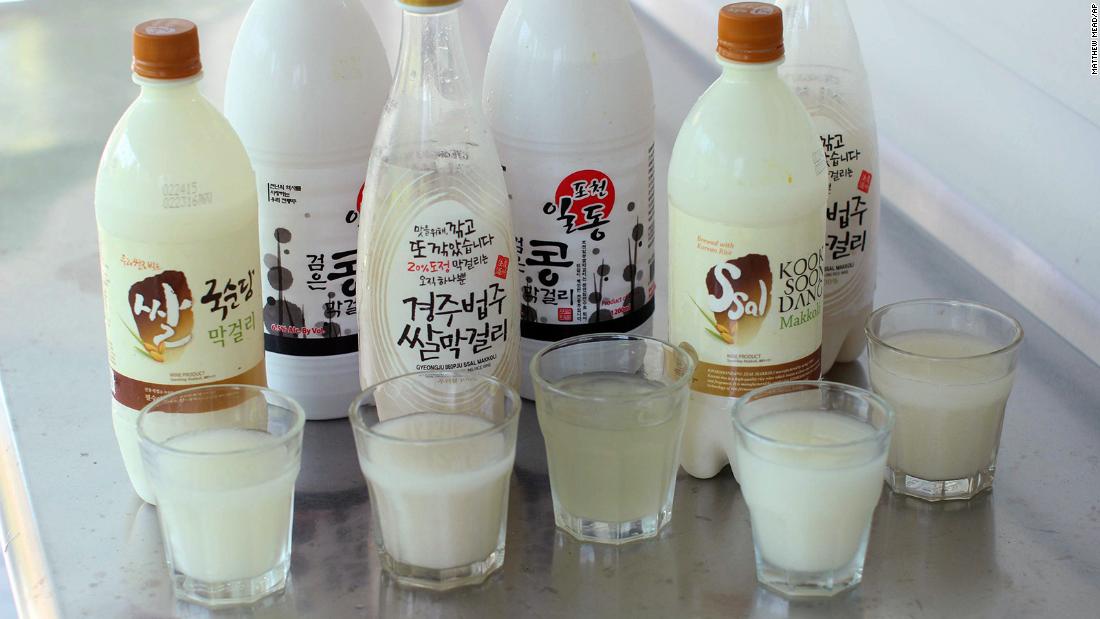 Makgeolli: How Korean rice wine comes out of the shadow of soju

(CNN) — Kim Kyung-seop remembers going to cheap bars with his friends after class, where they drank as much makgeolli as possible.

“You know the saying, ‘alcohol consumes men?’ It was like that.”

Makgeolli, the milky and often sweet traditional rice wine from Korea, was chosen for its price, not its taste.

In 1989, when Kim went to college, a half-gallon of makgeolli cost about 40 cents. He and his friends sat around a table and poured makgeolli from a copper kettle into individual copper bowls, as is the tradition.

Kim, now an adjunct professor at Global Cyber ​​University in Seoul, has been teaching makgeolli brewing techniques for 10 years. Still, he remembers his early encounter with the drink which was uncomfortably sour and bitter.

‘When we were with women, we drank beer. But among the boys we drank makgeolli.’ Makgeolli – with his less posh reputation – was not fit to impress women.

Two decades later, in bars in South Korea’s capital, the frosted drink of Kim’s memory became trendy, this time in the hands of a young generation of entrepreneurs and brewers.

“We’ve worked really hard to get rid of the established images that people have of makgeolli,” Kim said.

Kim Min-kyu (no relation to Kim Kyung-seop) is a brewer who led the change. He launched his premium makgeolli brewery Boksoondoga in 2009.

Min-kyu’s teetotal, devout Christian father opposed his plan — especially after spending the family fortune supporting his son’s five-year training as an architect at Cooper Union in New York City. His father even smashed a clay pot used for brewing makgeolli in a fit of rage.

Min-kyu was not deterred. He believed in the power of his grandmother’s makgeolli recipe.

As a child, he visited her farm in Yangsan, a city in the southeast. She would mix semi-steamed rice with her homemade yeast and water. And he listened to the silent bubbling of air as the mixture fermented into makgeolli. His fondest memories were his grandmother generously sharing the ready brew with the neighbors, after which they would sing and dance.

He convinced his family that to him brewing is an extension of architecture. With his training, he designed the branding, marketing materials and the brewery building, while his mother brewed the makgeolli and thus made the first bottle of Boksoondoga. Doga means “brewery” and Boksoon is Kim’s mother’s name.

The timing was coincidental. Makgeolli came from an ancient dark age.

Kim Min-kyu is one of the pioneers of the new makgeolli scene in Korea.

The history of a drink

Makgeolli is a combination of the Korean words mak (meaning “roughly done” or “a moment ago”) and geolleun (“filtered”).

Though the name first appears in ‘Gwangjaemulbo’, an encyclopedia believed to have been written in the 1800s, the opaque alcoholic drink likely dates back as far as a millennium.

An early 20th century record claims it was consumed in every corner of Korea.

“Makgeolli is inherent in Korean culture, it is the drink of Korean people,” says Kim Kyung-seop.

One reason for its popularity is its simplicity. It is a mixture of steamed rice, yeast and water, which is left to ferment for a few weeks in a clay pot. Many families all over Korea brewed their own drinks with their unique recipe.

Japanese colonization in the first half of the 20th century brought the end of many cottage industries. The colonial government eliminated homebrewers in favor of standardized, industrial spirits makers. All alcohol production was taxed and permits were required, even for personal consumption.

A few mass-produced beverages dominated the market, and home brewing was banned in 1934.

World War II and the Korean War devastated the country. The new government continued the policy of strict control of alcohol production. As the food shortage worsened in the 1960s, the use of rice – the main ingredient of makgeolli – for the production of alcoholic beverages was banned.

Manufacturers used wheat and barley as substitutes, and makgeolli’s popularity declined. It was supplanted by modern soju, a clear drink made by diluting ethanol. As the economy improved and rice supplies exceeded consumption, the ban on rice alcohol was lifted in 1989 and home brewing became legal again in 1995. But much tradition was lost.

A North Korean-themed bar, Pyongyang Pub has opened its doors in the South Korean capital — and it has raised some eyebrows.

The recovery of the lost art of makgeolli brewing can be largely attributed to pioneer researchers such as Park Rock dam. Park traveled through Korea for 30 years collecting recipes and recreating ancient techniques.

The government also reversed course from its previous policies and embraced traditional alcohol as a proud heritage – and potentially lucrative – industry.

In 2016, the government allowed small-scale breweries and distilleries to sell their alcoholic beverages by reducing the required brew tank size from 5,000 to 1,000 liters. The following year, traditional alcoholic beverages were given the unique privilege of being sold online and delivered directly to consumers.

While the Covid-19 pandemic prevented people from going to bars and restaurants, online and offline sales of makgeolli soared. According to a 2021 report published by Korea Agro-fisheries and Food Trade Corporation (aT), a government-owned company that promotes agricultural products, the makgeolli market grew by 52.1%, while the total liquor market grew by 52.1% in 2020. 1.6% shrank.

In Kim Kyung-seop’s makgeolli class, half of the students are entrepreneurs, many of them women in their thirties or younger. Ten years ago, almost everyone in the class was over 50 and wanted to brew makgeolli as a hobby after retirement.

Since 2009, the number of permit holders to brew makgeolli has increased by 43%, according to data from the National Tax Agency.

Kim says opening a makgeolli brewery is much easier than any other type of alcohol. While equipment to set up a beer microbrewery costs about 200-300 million won ($155,000-233,000), equipment for a makgeolli brewery can be purchased for 10 million won ($7,800), Kim says. Plus, you only need four three-hour lessons to brew something that’s better than the mass-market makgeolli, he adds.

Now her company The Sool Company offers makgeolli classes and consultations for those interested in opening their own brewery, but most of her clients come from abroad. She says her business has quadrupled during the pandemic.

Her customers come from countries such as the US, Singapore and Denmark. Many of them are members of the Korean diaspora. “They see how Korean people enjoy it here and they are inspired to bring it back to their country,” she says.

“It was so different, so interesting. It’s rare to discover something that people in the world have never heard of.”

She organized meetings with fellow enthusiasts and eventually taught herself Korean as most of the resources were not available in English.

Participants in a tasting of The Sool Company hold up their glasses.

Mellor believes that makgeolli will appeal to a foreign audience.

“It’s very easy to brew yourself. All you need is rice and nuruk (yeast).”

And for her, the propagation of the makgeolli carries another layer.

“This is saving something that was about to disappear,” Mellor says.

Kim Min-kyu says his makgeolli will be sold in the US and Austria this year and other Western buyers have approached him. His makgeolli is already a hit in Japan, where it became popular during Hallyu, or the Korea wave in the mid-2000s, a period when the success of K-dramas and K-pop opened the door for other cultural exports such as kimchi and traditional drinks.

“For foreign consumers, this natural fermentation is considered healthy, organic, and clean. And it’s a kind of alcohol they’ve never seen before,” says Min-kyu.

Korean soft power has expanded beyond Asia in recent years. He believes that makgeolli can ride this wave.

Despite the rapid rise of makgeolli, the South Korean alcoholic beverage market is still dominated by soju and beer, which account for more than 80% of sales.

Min-kyu says the biggest challenge facing makgeolli makers is the public perception that the drink is for old people. Most of his advertising and marketing focuses on changing this perception. In one ad, a sharp-looking male model with a shaved head and eyebrow piercings subtly pours the makgeolli into a champagne flute.

Changing perceptions regarding the food best paired with makgeolli is another obstacle.

In Korean culture, alcohol is almost always consumed with a set meal or snack. For makgeolli, this is jeon, a Korean savory pancake made by frying meat or vegetables in seasoned flour batter.

“A cool sip of makgeolli after a bite of savory scallion jeon acts as a palate cleanser, readying you to fully enjoy another savory bite,” says Kim Kyung-seop.

The combo is especially popular on rainy days. According to a report from the Ministry of Economy and Finance, sales of makgeolli and ingredients for jeon are rising on rainy days at major supermarket chains.

But premium makgeolli, with its broad spectrum of flavor, effervescence, and body, goes well with any type of food, says Min-kyu.

“I drink it with jajangmyeon (a Chinese-Korean noodle dish) and it also goes really well with ice cream. Being a fermented drink, it tastes great with other fermented foods. I love it with kimchi and really flavorful cheese,” added Min-kyu.

At the tables, more women filled the chairs than men. After each pour, the bartender explained the flavors and origin. They smiled. They raised the glass to their lips and listened carefully to every note hidden in the drink.

Jihye Yoon and Minji Song contributed to this report

Tags: food and drinkMakgeolli: How Korean rice wine is stepping out of the shadow of soju - CNN
ShareTweet