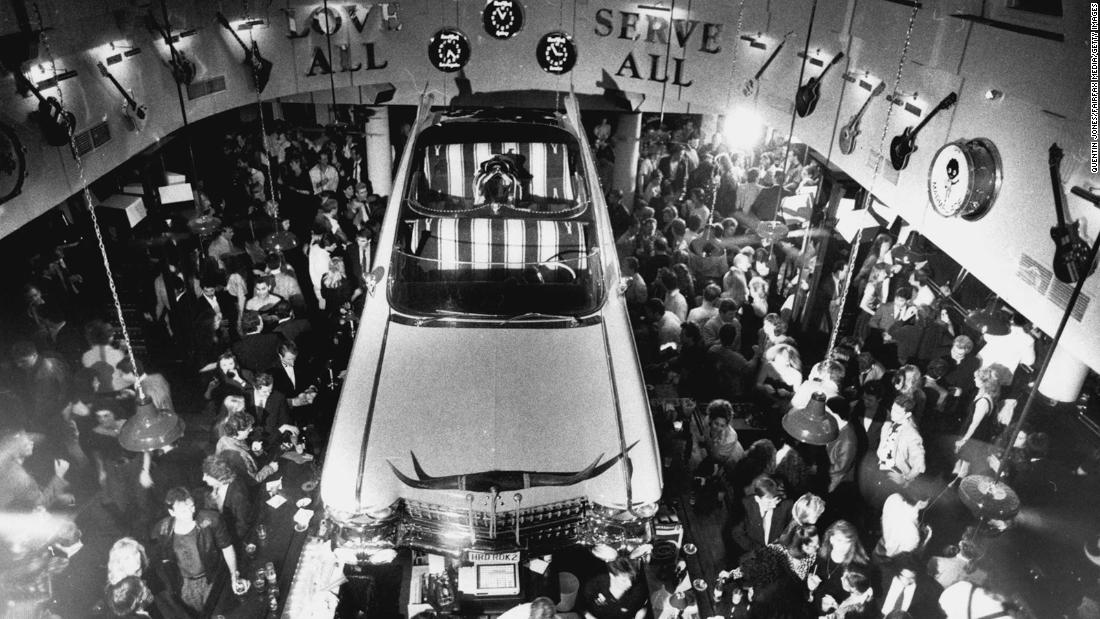 Looking back on 50 years of Hard Rock Cafe

Editor’s Note – Monthly ticket is a CNN Travel series that highlights some of the most fascinating topics in the world of travel. In August, we’re going back in time to relive some of the greatest retro travel experiences.

(CNN) — Before being a global chain and internationally recognized brand, the Hard Rock Cafe was a single restaurant in London.

It was founded by two American businessmen, Peter Morton and Isaac Tigrett, and opened its doors in 1971. Morton was born in the industry – his father founded the popular American chain Morton’s Steakhouse.

London had no shortage of restaurants or museums. But Hard Rock’s genius was in pairing the two.

In the 1960s, ‘Swinging London’ was the coolest city in the world, so anything that happened there, especially if it was related to the music scene, quickly made headlines around the world.

If a British restaurant conceived by Americans seemed like a strange concept, Morton and Tigrett leaned on their background instead of running away from it.

It was an allusion to an allusion, the epitome of a kind of optimistic, shiny America that existed more in pop culture shows like “Happy Days” than in real life.

Half a century later, the Hard Rock Cafe brand has grown beyond restaurants and hotels.

Depending on who you ask, it’s either a delightful nirvana for music lovers or an old-fashioned restaurant that exists to sell produce. Either way, the brand has securely established its legacy.

Putting the “rock” in Hard Rock

Each Hard Rock is filled with music memorabilia, much of it donated by the stars themselves.

Merchandise became an important centerpiece of the brand, and not just on the walls. After all, a person can only eat one cheeseburger at a time, but they can buy a whole stack of souvenirs at once.

As Hard Rock tells it, the London restaurant agreed to sponsor a local football team and put their logo on the team’s jerseys. Then the idea for regular shirts was born and in 1974 the first ones came on sale.

It took nearly ten years for the restaurant to expand internationally. A Los Angeles outpost, the first in the US, opened in 1982. Locations in Tokyo, Paris, Athens, Hong Kong, New York City and more followed.

Many of the Hard Rock Cafes also had stages where local and international musicians could perform.

Often the best acts were rolled out for openings at new branches.

Chinese soldiers march past the Hard Rock Beijing in the 1990s.

However, it is not only famous rock stars that have made their appearance in the restaurants and casinos.

For Jesse Dracman, who worked for two decades at the Hard Rock Cafe Surfers Paradise in Australia’s Gold Coast region, the opportunity to interact with guests — from celebrities to everyday people — was one of the most enjoyable parts of the game. work .

“I’ve tried to treat every customer equally,” he says. “Once there was an elderly lady who was eating alone there, so I started talking to her. Turns out she’d seen the Beatles in England when she was 17.”

Among the famous clients he went out of his way to treat like regular people were Vince Neil, Jimmy Barnes, and Gene Simmons.

In 2021, football icon Lionel Messi signed up as a global brand ambassador. Menus added a “Messi Burger” in his honor.

Funk Band the Bar-Kays perform at the Hard Rock Memphis in 2014.

Rise of the super fans

One day, Lou Nuccio traveled from his native Bayonne, New Jersey, to New York City for lunch with his father.

“I ate at this crazy place with my dad. They had a Cadillac coming out of a wall and it was pretty cool,” he says.

That crazy spot was, of course, the Hard Rock Cafe, which was located on 57th Street in a busy part of downtown Manhattan.

From that moment on, Nuccio was addicted. While working at a logistics company, he saw Hard Rocks in almost every place he traveled to. At every opportunity, he picked up some of the commemorative pins the brand sells. He says he now has about 6,500 of them.

However, the sense of fun and community that Nuccio found at Hard Rock didn’t really extend beyond the restaurants themselves until the advent of social media.

Nucio has created a Facebook page, HRC Global Community. On it, he shared personal photos and reviews of various outposts he visited, along with information about upcoming events. It now has more than 10,000 followers from all over the world.

“The community is made up of collectors and travelers,” he says. “I am both. But (collectors) are the people who really fuel the engine. The big milestones are what people love. When you visit, you have a visit (tracker) and they log you in, and if when you reach a milestone you get a special pin. When you have visited 25 cafes you get a milestone pin.”

In addition to pins, many fans collect shot glasses and T-shirts.

Some of the bigger Hard Rocks host swaps where superfans can meet. Nuccio also travels to many of them and documents them on his website, tagging fellow collectors in photos.

Being a megafan, especially one with a large online following, has its perks. On his last trip to London, Nuccio was given a personal tour of the ‘rock shop’ cellar vault, which houses top items such as one of John Lennon’s favorite army jackets.

Paul McCartney and Linda McCartney’s band Wings played in the London cafe in the 1980s.

After the lights go out

Since 1971, the lives of the original founders have gone in completely different directions. They had into a quarrel 1979 and ended with the brand splitting between them, with each founder having a claim to certain parts of the world where he could own and operate new Hard Rocks.

Regarding the feud, Tigrett told Texas Monthly in 1987 that Morton was “entirely money-oriented” and preferred to work on the social side of the brand. However, Morton just told the magazine, “I just go about my own business.”

Finally, in 2007, Morton and Tigrett sold the company to the Seminole Tribe of Florida. Now the tribe runs more than 180 Hard Rock restaurants, cafes, hotels and casinos.

Morton settled in Los Angeles, where he became a film producer. His son, Harry Morton, opened a Mexican restaurant chain called Pink Taco and owned it until… are dead in 2019 at the age of 38.
Meanwhile, Tigrett moved away from the spotlight. After the death of his wife Mo Starkey — who was previously married to Beatles drummer Ringo Starr, and who once are Tigrett”ultimate collectible“ — he spent time in India and is said to be a devotee of the late guru Sathya Sai Baba.
He is a board member of the Divine Will Foundation. According to the foundation’s website, it supports hospitals and food programs in India, the United States and elsewhere.

Although representatives of Seminole Gaming have turned down interview requests from CNN, the brand’s website says several Hard Rocks are under development in China.

Tags: food and drinkLooking Back at 50 Years of Hard Rock Cafe - CNN
ShareTweet