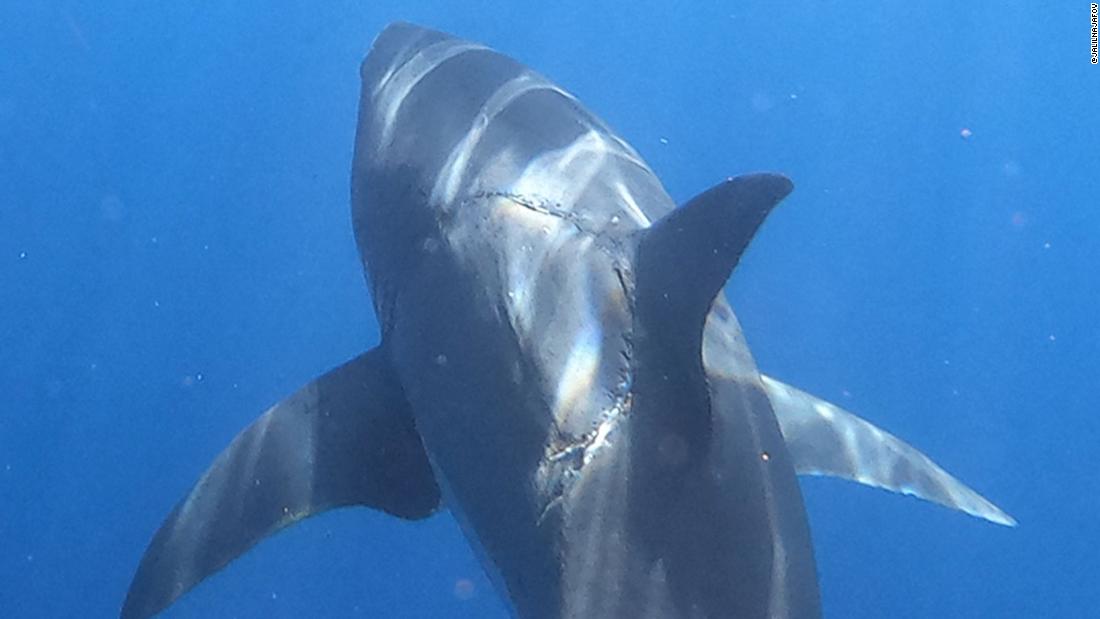 Photographer Jalil Najafov’s first thought when he saw the great white was: “Is that real?”

It was August 2019 and Najafov, a shark enthusiast, conservationist and filmmaker, was exploring the coast of Mexico with some friends. The group spotted a great white shark swimming close to their boat.

This was already exciting. Then the group realized the shark had a mysterious bite mark on its side.

“I was really surprised since I never saw something like this in my life,” Najafov tells CNN Travel today. “The bite mark was so huge on a huge shark.”

The Azerbaijan-born shark conservationist and filmmaker dove into the waters below, armed with his GoPro7 waterproof camera, to capture a shot of the big fish with the bite.

He shared one of the resulting photographs on his Instagram account for the first time in late December 2021.

He’d mislaid his memory card after the Mexico trip, Najafov explains, and only recently rediscovered the photos.

Najafov knew the image was exciting.

“I have been working with sharks and shark content for many years, I have a lot of experience in this niche,” says Najafov. “I know for sure when I see something rare, I have never seen such a huge shark scar.”

The photo, which Najafov posted to Instagram in video form — focusing in on the mysterious bite — blew up.

The response, in Najafov’s words, was “crazy,” as people theorized on the origins of the scar.

Before posting, Najafov had enlisted friends and fellow shark experts for their perspective.

Scientist Dr Tristan Guttridge, who runs marine nonprofit Saving the Blue and has presented on Discovery Channel’s Shark Week, ruled out the theory that the shark had sustained the bite in a mating act.

“I’d rule out mating probably due to position as the wound looks like it’s healed a fair bit and although mating scars can be nasty they are more superficial than that,” was Guttridge’s contribution, according to Najafov.

Najafov says Guttridge concluded that the shark was most likely attacked by another shark.

Najafov says Michael Domeier, another friend and Shark Week alum, who is also head of the Marine Conservation Science Institute, said he was “confident this is competitive aggression” and added that the scar would have since healed, becoming indistinguishable.

Najafov worked for several years for the Azerbaijan government before his passion for sharks prompted him to switch directions.

His goal is to shine a spotlight on sharks and highlight their important role in the planet’s ecosystem.

“There is no ocean without sharks, and no oxygen without the ocean. So by saving sharks, we save the planet,” says Najafov, who is concerned by the threat posed by fin trading.

For some, Najafov’s image of the great white with the alarming bite has a fear factor appeal. But Najafov insists he’s never been scared of diving alongside the creatures.

“I love sharks and I absolutely enjoy them while diving,” he says. “Sharks are not monsters!”

There’s a misconception, according to Najafov, of the danger of sharks.

“The oceans are home to about 500 different shark species, but about a dozen of them are known to be potentially dangerous to humans,” he says.

He also has upcoming trips to Mexico and Maldives planned for 2022.

“I can’t wait to get underwater and share my experience,” he says.

Tags: Incredible photo of a shark with a mysterious bite mark on its side - CNNtravel
ShareTweet

Where to travel 2022: The best destinations to visit