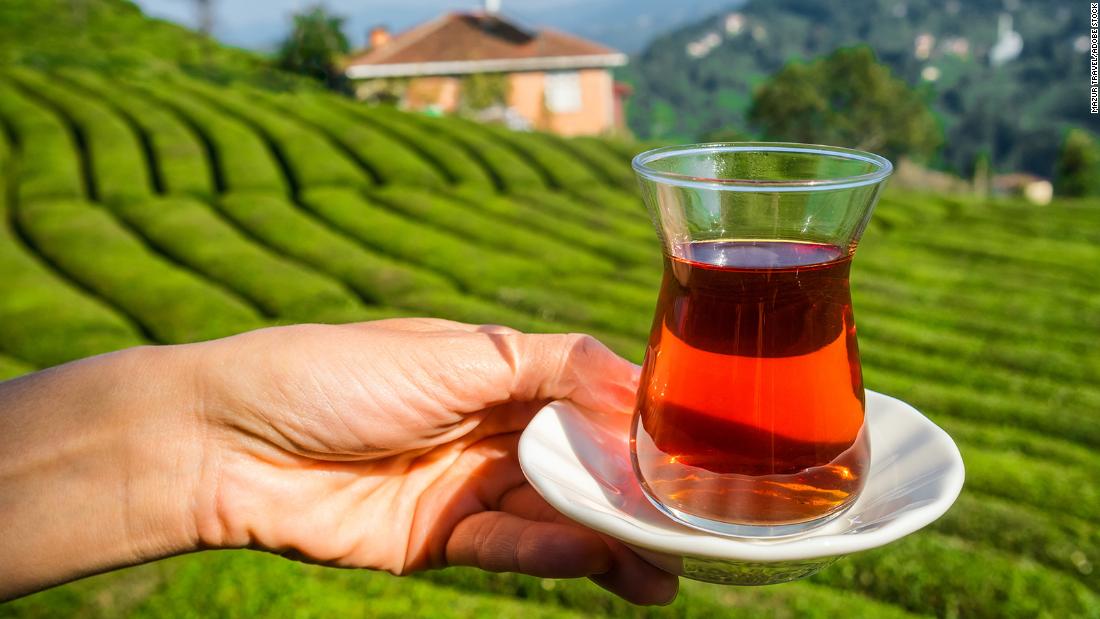 How New Brews Are Shaking Up Turkey’s Tea Country

Editor’s Note – This CNN Travel series is or has been sponsored by the country highlighting it. CNN retains full editorial control over the subject matter, reporting and frequency of articles and videos within the sponsorship, in accordance with our policies.

(CNN) — Perched atop a hauntingly craggy mountain in northeastern Turkey, the village of Haremtepe resembles an island surrounded by a vast ocean of greenery: verdant, bushy rows of tea plantations continue as far as the misty skies fleetingly show.

Dozens of local tea pickers, almost completely hidden among the deep green vegetation of the hill, quickly and efficiently pluck the glittering leaves and deposit them in large cloth bags that are slung over their shoulders before the next deluge begins.

“This place is special,” says Kenan Çiftçi, the owner of a tea plantation and cafe in the dizzying village. “Normally, tea can only be grown in equatorial regions. But the microclimate of the area, lots of sun and rain, allows tea to thrive.”

Here and everywhere in Rize – a fertile Black Sea province known for its humid climate, monsoon-like rains and breathtaking vistas – most tea is grown in what is the world’s largest nation of tea drinkers.

The British and Chinese, steeped in tea history, may get more attention, but Turkey (or Turkey as it now calls itself) has by some estimates the highest per capita consumption in the world — the average Turk consumes four kilograms of the leaf per year, according to the International Tea Committee, the equivalent of the 85 million people who drink four glasses a day.

Much of Turkish tea comes from the lush plantations of the Rize province.

Brewed in a samovar-like utensil called a boiler, the powerful loose-leaf black tea is usually drunk very regularly from small, tulip-shaped glasses. At the same time, the traditional technique of brewing Turkish tea – which uses a special “double-boiling” system of two boilers stacked on top of each other – can take a long time to prepare, and thus goes hand in hand with the often slower pace of Turkish tea. to live.

“Tea consumption is as much a social activity as it is a culinary delight,” says Hüseyin Karaman, Rector of Recep Tayyip Erdogan University in Rize, which launched a tea library earlier this year with 938 books devoted to the drink. “It’s the glue that holds all the people in our society together.”

From the rural areas of the Black Sea to the laid-back Kurdish tea gardens of eastern Turkey and the ultra-hip cafes of Istanbul, tea is used for everything from welcoming strangers to catching up with friends; kick off the day to relax at the end of a meal; or to slurp languidly at a game of backgammon.

Drinking çay is deeply intertwined with Turkish culture, according to Karaman, dating back to the times of the Silk Road – the ancient roadside inns known as caravanserais would often have teahouses to welcome weary traders – and evidence of tea leaves can be traced back to the 16th century in the Ottoman Empire.
During the reign of Abdülhamid II, who was sultan of the Ottoman Empire from 1876 to 1909, tea was planted all over the empire, Karaman explains, but yields were generally poor because many places had unsuitable climates. However, it was soon discovered that the Black Sea region was better suited for tea growing, and the country’s first tea factory in 1947 was founded in Rize.

“Large-scale tea production here is a relatively modern phenomenon,” Karaman adds. “But it grew and spread quickly and became deeply entrenched in the culture. Now it feels like tea has been around for thousands of years.”

But while by some estimates Turkey produces up to 10% of the world’s tea (275,000 tons were processed last year), most of it is consumed domestically, and most of it is still the ancient variety of black tea grown on Rize’s 767 million square miles of tea estates, which is then harvested over a six-month period of From May to October, before it is withered, rolled, fermented and then dried.
However, change is brewing for Turkish tea, as producers want lazikaa startup from Rize, founded in 2016, is breaking with tradition.

Working exclusively with smallholder farmers, the company produces organic green and white teas, often using local ingredients such as yayla flowers from the nearby Kaçkar Mountains, which softens the taste and, according to some locals, has medicinal benefits.

“Turkish tea is concentrated on the ancient habits of people,” says founder Emre Ercin. “There is no variation. It is always the same taste. We want to change that.”

There is clearly a hunger for a new leaf: in 2021 Lazika processed about seven tons of hand-picked tea, but production has increased significantly and this year it will process 25 tons.

The company has also opened a cafe in Istanbul to sell its wares, with more to follow soon. “Our consumers have a new taste. It just takes some effort,” says Ercin. “Their eyes are opened.”

Others take a different approach to production. Aytul Turan, co-leader of the women-led Tea Chef company based in Rize, started making handmade tea after visiting China in 2017.

“I try to make the best tea by processing the fresh tea leaves, which are harvested by hand without damaging the tea plant, with great care and precision, while preserving the product structure,” she says.

A scientist at ÇAYKUR, the Turkish state-owned tea production company.

Together with her friend Yasemin Yazıcı, they now harvest and process high-quality white tea leaves by hand, as well as handmade green tea, black tea and even Japanese-style matcha.

“I have a very deep love for tea production,” Turan adds. “We started with the realization that we young people have a responsibility to know, develop and innovate the history of Turkish tea.”

But even with caykurTürkiye’s state-owned tea company, which employs more than 10,000 people in 45 factories, puts innovation on the agenda.

In Çaykur’s labs, scientists in white coats are constantly testing new technology and techniques to improve the taste and consistency of the product, monitoring everything from pH levels to color tone. For certain blends, a “2.5 leaf” process is used to take only the bud and two youngest leaves from the tea bush – considered by some to be the most refined flavor.

“We are always trying to create new levels of quality,” said Muhammet Çomoğlu, who works for the state-run Rize Tea Research and Application Center (ÇAYMER). “For Turks, tea is one of the most important parts of the daily diet.”

But as Turkish tea continues to grow and develop in new directions, its ability to bring people together remains. As a toast to Turkey’s national drink, a 30-meter-high building in the shape of a gigantic Turkish tea glass – including bazaar, viewing terrace and in the future a museum – was opened in the city of Rize. year.

“Life without tea is no life at all,” says Hasan Önder, the bazaar’s manager. “We should celebrate this important part of Turkish life, both among ourselves and by sharing the wonderful story with visitors.”

They met on a promenade in Nice. Now this couple earns a living by traveling in a world of sounds