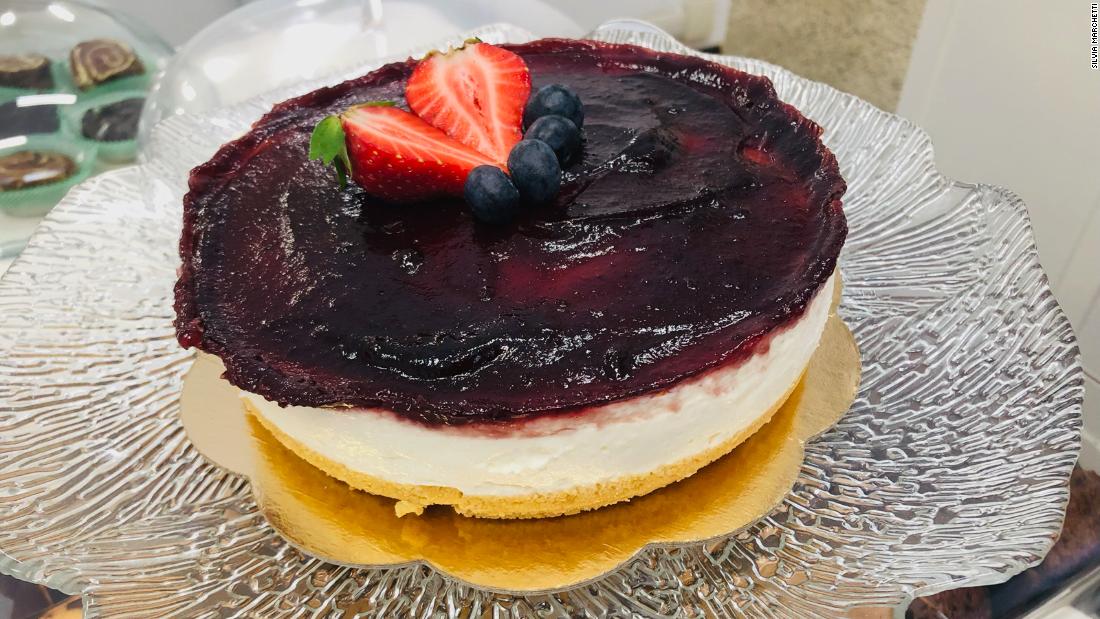 How American Style Cheesecake Was Born in Ancient Rome

Editor’s Note — Sign in CNN Travel’s Unlocking Italy Newsletter get insider information on Italy’s best-loved destinations and lesser-known regions to plan your ultimate trip. Plus, we’ll get you in the mood with movie suggestions, reading lists, and recipes from Stanley Tucci.

Rome (CNN) — It was nutritious, easy to prepare and delicious as a snack, especially when sprinkled with poppy seeds and served in cubes.

The ancient Romans feasted on a delicious honey-crusted cheesecake called Savillum, which is believed to be the true ancestor of the modern American-style cheesecake.

Instead of Philadelphia soft cheese, there was fresh goat’s milk ricotta straight from the shepherds. It was worshiped by slaves, aristocrats and soldiers.

The first fully documented recipe in history describing the preparation of a delicacy approaching modern cheesecake dates back to the third century BC and was written by a prominent ancient Roman senator, army general and historian.

“Cato the Elder was not only a great writer and philosopher, he was a foodie and advocate of rural traditions and food,” said Giorgio Franchetti, an ancient Rome food scholar and author of the book “Dining With The Ancient Romans.”

Franchetti says that Cato captured the recipe for his favorite cake, Savilium, in one of his key works, ‘De Agri Cultura’. It was, he tells CNN, “very popular in Roman households.”

A cake with legs

Many myths and stories have swirled around the creation of this popular dessert, Franchetti says, but he insists that only that of its Roman origin has legitimacy.

Thanks to the expansion of the Roman Empire, Savullum spread everywhere and eventually landed in England and then, centuries later, in the New World, evolving over time and taking local turns.

“Savillum had very long legs, he traveled the world,” says Franchetti, who has unearthed many ancient Roman recipes. “Over time, the Romans perfected the cooking and preparation technique and brought it to their colonies, which expanded from the Middle East to Britannia.

“It was a very simple cake made with simple, everyday ingredients: goat’s milk, honey and eggs. And thanks to Cato, we even know the exact amounts of each.”

According to another origin story, a “seminal” generic dessert of cheese and honey was first created by the ancient Greeks before the Romans, in the 8th century BCE, and used to give an energy boost to Olympic athletes.

However, the few secondary Greek sources that mention the dish, Franchetti says, don’t give specific details about how it’s made or what it looked like, let alone offer an exact recipe.

Even if it was adopted and refined by the Roman conquerors of Greece, he adds, it was the Romans who globalized Savillum, not the Greeks.

A well-cooked Savillium resembles an omelette.

In his recipe, Cato gives exact instructions and tips for making the cheesecake.

He says you put half a libra of flour (1 Roman libra was about 11.5 ounces or 327 grams), 2.5 libras of goat cheese (also known as ricotta), an egg, and a quarter of a libra of honey in a terracotta pot that had been previously greased with olive oil, must mix. cover it with a lid and then place it on the fire.

Cato explicitly advises frying the deep, thicker center well. “When it’s baked, pour honey over it and sprinkle poppy seeds over it. Then put it back on the stove to finish baking before serving,” the recipe says.

Savillum was probably served without a spoon, as the Romans liked to eat with their fingers, but was diced to make it easier. It was usually eaten during the meal rather than at the end as a dessert.

Cato’s Savillum can still be tasted today, among other ancient Roman dishes recreated during elite “Roman dinners” hosted at archaeological sites in Italy by Franchetti and “archaeo-chef” Cristina Conte, who recreates recipes from the Eternal City.

“Savillum is extremely easy and quick to make, taking just two hours, much less than cheesecake,” says Conte, who also cooks ancient Roman dishes at home with her family. “It has an excellent sweet and sour taste because of the honey and cheese.”

“It was a very humble treat that was enjoyed regularly by both lowly and aristocratic families. I bake it in an oven or wood oven if possible, and I love it when it’s still warm, when it’s puffy and creamy.”

When baked to perfection, Savillum resembles a round pancake or omelette, slightly yellowish and with an overcooked surface. According to Conte, the Romans also made a variant of it with apples and pears.

Romans liked to eat cubed cheesecake as a snack.

Today, Savillum’s legacy can be found in many classic Italian desserts.

Most pastries and cakes made with cheese products such as ricotta, mascarpone and burrata can trace their origin to it.

Pastiera from Naples, Sicilian cassata and ‘granny cake’, a classic cake with ricotta, lemon and pine nuts are relatives. Like Sardinia’s seadas made with pecorino sheep’s cheese and honey, Latium’s Laurina tart with ricotta and chocolate, and sfuagghiu from the Sicilian village of Polizzi Generosa, made with Tuma sweet sheep’s cheese, pumpkin candied, cinnamon and cocoa.

Then there’s Italian-style cheesecake. Thanks to globalization, Savillum has returned to its origins via American cheesecake and has turned into a sweet trend in Italy.

The robiola cakea cake made with a special kind of soft cheese popular in northern Italy is identical to the classic New York cheesecake—except for the Philadelphia cream cheese—and has a base of crushed artisanal biscuits.

Despite being devoid of delicious native pastries — from cannolo to Tiramisu, which also includes a type of cheese — Italians adore American cheesecake, unaware of its Roman origins.

Many resorts, pastry shops and restaurants now have it on their menu, and not just in big tourist cities that cater to foreign tastes. Today, even in the deepest Sicily, considered the “kingdom” of Italian desserts, you can find cheesecake eateries.

Simona Orlandi: American cheesecake is “refreshing and pleasant” in the Italian summer.

Biscomania is an artisanal cake and biscuit boutique in the small rural town of Capena, near Rome. It prepares traditional American cheesecakes and Italian twists with pistachio, nutella and red fruit jam toppings. Philadelphia cheese, mascarpone, ricotta or yogurt is used, depending on the taste of the customers, who buy it for special occasions.

And while many cheesecakes require baking, others are refrigerated with no baking required.

“It’s not just part of a growing American fad,” says Biscomania owner Simona Orlandi. “Chilled cheesecake is like a kind of semifreddo, very refreshing and pleasant in the summer. Young people usually order it, they are the most Americanized here.

“Besides the US, unbaked cheesecake is arguably the most popular among Italians. Because it requires no preparation, baking and rising, families have started making it at home. It’s a great DIY cake.”

Because Italian meals are usually quite filling, Orlandi recommends not eating cheesecake for dessert, as it requires a lot of extra digestive power, she says.

Franchetti is a fan of cheesecake herself and says its story shows that even food can be an archaeological treasure.

“While we may have lost traces of what happened to Savillum over time, we know with certainty that it reincarnated completely in cheesecake, which redistributed Anglophone culture worldwide.

“The ancient Romans invented and spread it millennia ago, and today the Romans have recovered it from places that were once under Rome’s rule. In a way, cheesecake has returned home.”