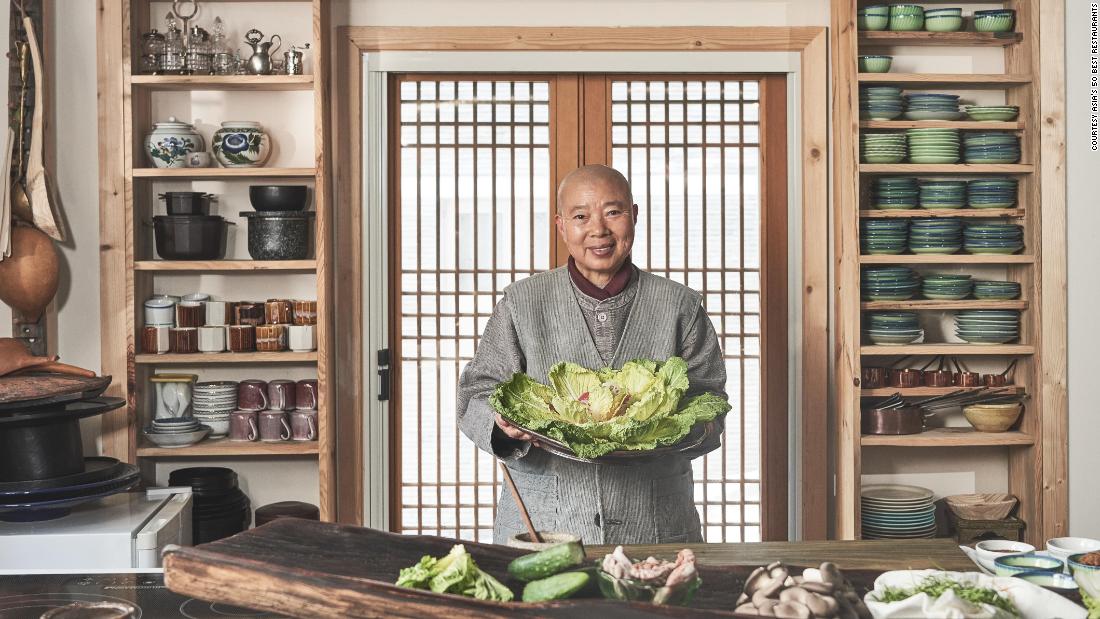 Editor’s Note — Sign up for Unlocking the World, CNN Travel’s weekly newsletter† Get news about opening and closing destinations, inspiration for future adventures, plus the latest in aviation, food and drink, where to stay and other travel developments.
(CNN) — It’s a busy Saturday morning for Jeong Kwan, a South Korean Buddhist monk.

After her early morning meditation exercises and breakfast, she tends her garden at Baekyangsa, a temple in scenic Naejangsan National Park, south of Seoul.

The air is filled with the scent of blooming coriander flowers. A wild deer nibbles on the leaves in the garden.

The aubergines and green peppers are growing. The cabbages she planted over the winter are plump and ready to be harvested.

“It’s beautiful because it has a lot of energy — it’s grown through the cold winter,” the monk tells CNN Travel via a translator, pulling apart her palms to demonstrate the size of this year’s cabbage.

Jeong Kwan devoted herself to Buddhism when she was 17 years old.

Jeong Kwan – her Buddhist name – is not your average monk. Her temple cooking has been approved by celebrity chef Éric Ripert of Le Bernardin in a 2015 New York Times Profile written by food journalist Jeff Gordinier. An entire episode of the hit Netflix series ‘Chef’s Table’ was devoted to her.
Most recently she was the recipient of the Asia’s 50 Best Restaurants Icon Award in 2022. Voted by more than 300 members of the Award’s academy, it celebrates culinary figures who have positively influenced and inspired others.

Yet little has changed in her world.

“I’m very honored to receive the Icon Award… As you already know, I’m a monk, not a trained chef. It’s great to hear that people all over the world are interested in Korean cuisine,” says Jeong Kwan.

“Even with such accolades, I must remain humble and allow no pride in my heart. Genuine sincerity is how I greet every person I meet.”

The chef devoted herself to Buddhism in 1974, but says she still feels like a teenager at heart, even as her age and her spirituality have grown.

Unlike many, from a young age she already had an idea of ​​the life she would like to lead. She was in elementary school when she told her father that when she grew up, she would live alone with nature.

When Jeong Kwan was 17 years old, her mother died.

“I grieved and after 50 days I went to a temple. There I met other monks who became my new family. I found relief and joy in practicing Buddhism. I then decided that I wanted to spend the rest of my life here, practicing Buddhism,” she says.

Three years after her practice, she moved to her current home, Baekyangsa.

“The path to the temple was very gentle – not bumpy or steep. I felt very calm and peaceful. It was like returning to my mother’s arms,” ​​Jeong Kwan remembers her first walk to Baekyangsa.

What is Temple Kitchen?

All dishes from Jeong Kwan are vegan.

In 2013, Jeong Kwan decided to open the doors of the temple to visitors so that she could interact with people who want to learn more about Buddhism, especially through the cuisine.

“Temple food is the compound that brings physical and mental energy together. It’s about maximizing the flavor and nutrition of plant-based ingredients with limited spices or added spices,” she says.

All dishes from Jeong Kwan are vegan and made without garlic, onions, spring onions, chives or leeks. (It is believed that the five pungent ingredients would disturb the tranquility of the mind by invoking anger and passion.)

Her food is made with the freshest organic ingredients, as well as fermented sauces and dishes such as bean paste and kimchi – all grown or made in the temple.

There is no set menu – she works with all products that are fresh that day, so dishes vary widely.

Jeong Kwan believes that food can help to balance elements in our body by restoring our moisture or lowering our body temperature to a harmonious state. An example is doenjang – Korean fermented bean paste – which the monk often uses to create this balance in her food. But making doenjang is a long process.

She and the other temple residents begin cooking and mashing soybeans in November. Then they are formed into meju – soybeans – for drying and storage. In April, salted water is added to the meju. In May, the monks in the temple separate the salted water – which at this stage is now soy sauce – from the bean paste.

“When you come to visit, you’ll see the part of the temple where we keep all the traditional ingredients — pastas and sauces — in jars. I’ve labeled them all so they’re very organized. It’s a really nice place, says Jeong Kwan, her eyes lit up as she talks about her food.

“This year’s bean paste is very tasty because the weather has been perfect. It’s super sunny during the day and still quite cool in the evening.”

She has jars of soy sauces, bean pastes, and picked radishes that have been brewed in jars for over two decades. These are her most treasured creations in the temple.

“If I ever have to go to another temple, I’ll take them with me,” Jeong Kwan jokes.

Buddhism and Human Connections Through Food

“For me, food is so important. It can bring such a strong bond between people,” says Jeong Kwan.

Jeong Kwan realized she had a passion for food at a young age when she saw her mother cooking.

In 1994 she decided to devote herself completely to temple cooking.

“For me, food is so important. It can bring such a strong bond between people,” says Jeong Kwan.

One of her fondest memories is a visit to the temple by her father.

“‘Why would you want to stay here – you can’t even eat meat here?'” she recalled asking.

“I made him a mushroom dish and after he tasted it, he said, ‘I’ve never tasted anything so delicious. If you can eat something so delicious here, I’m not worried about you. I’m happy for you to be in the temple.'”

But not all of her best food-related memories took place in her own kitchen. Jeong Kwon has been able to enjoy some incredible meals while traveling abroad.

Once in the Parisian restaurant Alain Passard, the famous French chef of the same name cooked her a vegan meal.

“While eating, I felt like this was my food. There was no barrier in food. It’s very comforting and I felt very much at home,” the monk says.

She also has a special place in her heart for Le Bernardins Ripert.

“Chef Eric was one of the people who really set me free with my food. He helped break down any thoughts people had against temple cuisine or vegan food. He really helped me come out of my shell,” says the monk .

Being free isn’t about “doing what you want,” adds Jeong Kwan.

“It’s not feeling trapped by remorse and guilt for not following the practices you believe in. So following all the virtues of my practice is what really sets me free,” she says.

An important example for her is cooking with an understanding of the natural life cycles and following the Buddhist virtues and teachings.

‘Cooking is not being fancy’

Jeong Kwan hopes she can use her newfound influence to encourage others to be more environmentally conscious.

Jeong Kwan finds her philosophy especially important in today’s world, full of challenges such as the pandemic, international conflicts and climate change.

“We’ve had pandemics and epidemics before. I believe this is all related to our actions that go against nature,” the monk says.

She believes that society should focus on three important things: tackling climate change, being more environmentally friendly and respecting all lives.

†[By doing all three,] it will put us back on the right track,” says Jeong Kwan.

Mindful eating and cooking will enable us to “do everything we need mentally and physically” even in times of adversity.

She hopes she can use her new-found influence to spread these important messages around the world.

“For me, cooking is not about being luxurious or showing difficult skills, but becoming one with the ingredients. When I’m cooking, I think about the ingredients as if they were part of me. When I use water and fire to cooking vegetables, I feel like we have become one.

“The heart and soul put into the food will be received by the people who eat it and create a positive and lasting cycle,” says Jeong Kwan.

Her goal? Seeing others adopt a lifestyle that honors and respects nature and our environment, promotes sustainable lifestyles and positively impacts climate change and saves lives.

“In order to do this, I have to change. Small actions start with myself and I hope I can share this with more people around the world, including the great chefs in the Asia 50 Best community,” says Jeong Kwan .

Baekyangsa is a temple in scenic Naejangsan National Park, about a 3-hour bus ride from Seoul. There is an entrance fee of KW3,000 (or $2.5) for daytime visitors. You can also join one of his temple stay programsincluding the Temple Food Experience Program with a cooking class with Jeong Kwan.

From the south end to the loop, Chicago's innovative spirit thrives