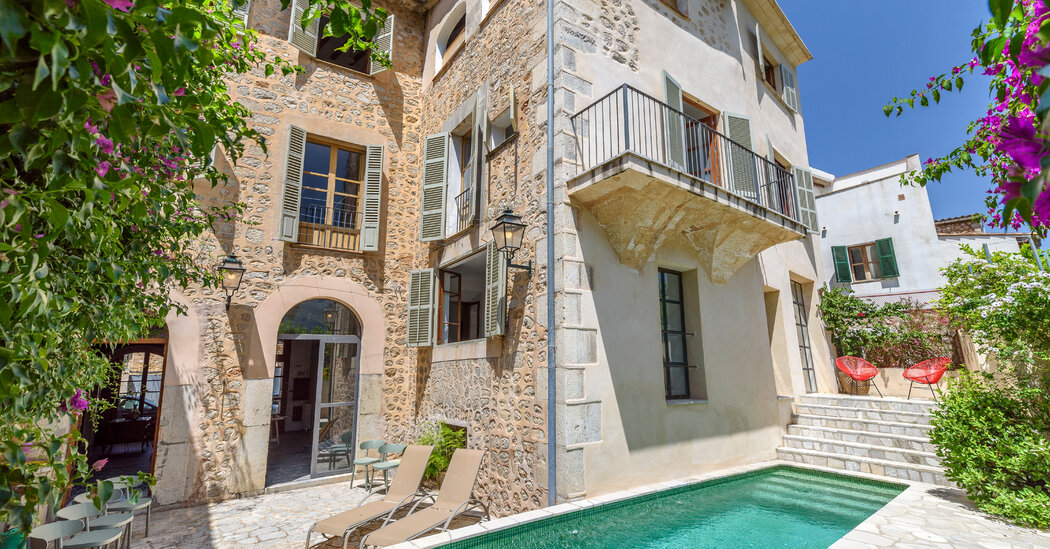 Eight bedrooms near the coast of Mallorca

This eight-bedroom stone country house House is located in the town of Sóller, near the northwest coast of Mallorca, one of the Spanish Balearic Islands in the heart of the Mediterranean.

The house was renovated several years ago, but the owners have kept the original architectural features – a mix of Modernist, Majorcan and French styles, including high ceilings, vaulted doorways, elaborate moldings and a beautiful staircase, said Eddy Barrera, the director of Engel & Völkers Mallorca West office.

“Sóller is quite a special village because it has influence from France,” Mr Barrera said of the town, which sits in a valley in the Tramuntana Mountains, home to the island’s highest peaks. “French fruit traders used to come to Sóller to get oranges and other citrus. And many Mallorcans went to France in the late 1800s and early 1900s, when the island was fairly poor. They returned with money and French influence.”

This property was probably built towards the end of the 19th century, although the exact year is not known because the island only started registering property in 1900, he said.

The three-story house, at just under 7,000 square feet, has a 750-square-foot courtyard with a swimming pool and faces a residential street. The front door opens into a foyer with the original gray stone floor. On the other side is a second entrance from the courtyard and a striking curved stone staircase, also original to the house. The living room has a fireplace and floor-to-ceiling windows; one office has traditional hydraulic mosaic floor tiles. An arched doorway in the office leads to a room with a wet bar and beverage cooler.

A door next to the stairs leads to the attached kitchen and dining room, both fitted with decorative hydraulic floor tiles and glass doors to the courtyard.

One floor up is a second living room, two bathrooms and three bedrooms, including the primary suite, which has a Juliette balcony overlooking the adjacent gardens. The owners repainted the doors and door frames in a deep gold mustard that was original to the house, Mr. Barrera said.

On the third floor are five more bedrooms and two bathrooms. The roof has a covered patio, but it needs improvement, he said.

The house is a short walk from Sóller’s main square, Plaza de la Consitución, which is surrounded by restaurants and cafes. Sant Bartomeu Church towers over the square, its modernist facade is a 20th century renovation of the much older stone parish church.

a historical wooden train runs from Sóller to the seaside town of Palma, the capital of Mallorca. Popular with tourists, the train dates back to 1912 and was originally used to transport citrus fruits, textiles and other goods. The harbor town of Port de Sóller is about a five-minute drive away. Palma de Mallorca Airport is approximately 40 minutes’ drive away.

The largest of the islands that make up the Balearic archipelago (the most important are Mallorca, Menorca, Ibiza and Formentera), Mallorca has seen a surge in home sales in recent years as the Covid-19 pandemic left many Europeans packing in search of family getaways in safe locations.

“People know what they’re looking for and they don’t waste time,” said Jack Newberry, an associate broker at Balearic Islands Features† “Without any kind of pushing, people will go for the asking price or more.”

According to an market report van Engel & Völkers, 2021 was a record year for sales in the Balearic Islands, with transaction volume of 6.6 billion euros ($6.89 billion), 80 percent higher than in 2020. About 40 percent of transactions involved international buyers involved. The unrelenting demand has exhausted the supply of available housing, which has further increased price pressure.

“This is the first year in about ten years that the number of homes on the market has fallen,” says Florian Hofer, the general manager of Engel & Völkers Balearics. “In the past, our offices always had around 2,500 properties for sale. At the moment there are just under 2,000.”

While there is a lot of new construction, older properties usually have to be demolished as about 40 percent of Mallorca is protected area, Mr Hofer said. The island’s advantages over some other popular Mediterranean destinations include its highly developed infrastructure, large international airport, many international schools and the fact that it has no low season, he said.

In the most exclusive areas, such as Port d’Andratx and Son Vida – known as “the Beverly Hills of Palma” – houses start at around 3 million euros ($3.13 million), Mr Hofer said. But smaller properties are available in the city of Palma for considerably less. “You can get a fantastic penthouse in Palma for 1 million euros ($1,043 million), or a one-bedroom apartment with a terrace for 400,000 ($417,000),” he said.

The Balearic government tried to curb demand from outside investors last year announced a ban on new vacation rental licenses, which are required for owners who want to rent out their properties. The ban will be in effect until 2026. “Certain areas became saturated,” Mr Newberry said. “There were areas where the streets were completely full because everyone was renting out their properties. But the ban has not really cooled the market.”

Who buys in Mallorca

The market is largely driven by foreign investment, mainly from Germany, Scandinavia and the UK, said Mr Newberry. That demand is so high right now that most international schools on the island have waiting lists, he said.

The city of Sóller has a very diverse population made up of at least a dozen different nationalities, including some Americans, Barrera said.

Mr. Hofer noted that the recent addition of direct flights between New York City and Palma is expected to spark even more interest from US buyers.

Mallorca does not have a multi-list service, so it can be a difficult system for foreign buyers to figure out.

“You need a good lawyer to navigate, and a good advisor who understands who to work with and the different parts of the island,” said Mr. Newberry. “It’s an Old World culture with an Old World system.”

The broker’s commission is about 6 percent and is paid by the seller.

Transaction costs, including real estate transfer taxes and notary fees, typically amount to 10 to 12 percent of the purchase price, Mr Hofer said. Taxes may be higher for new construction.