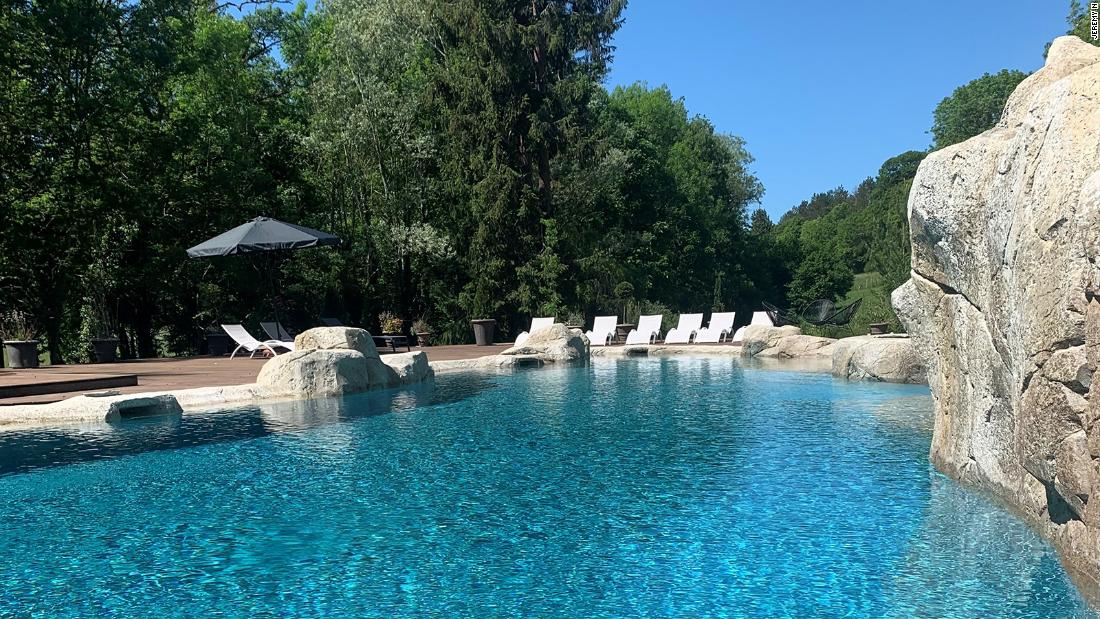 (CNN) — On a rainy day in France, triathlete Jeremy was at a loss, so he arranged a viewing of some properties in the quaint neighborhood he was staying in.

Originally from Wales, the father of two had lived in Paris for several years, but after a divorce he came up with the idea to move to the French countryside.

He realized he had found gold when he toured a house in Courgent, a town in the Île-de-France region, about a 45-minute drive from the French capital.

It wasn’t just the house that got him excited, though. It was the beautiful, but badly neglected pool that came with it.

The renovation process took about 12 months, but Jeremy is thrilled with the end result.

While the pool had fallen into disrepair, it was clear that it had once been an impressive structure and could be rebuilt – with a lot of work.

“I was absolutely amazed,” Jeremy, who has asked not to use his full name, told CNN Travel. “Because the potential to redo the pool and create an exceptional project was all I could imagine. I just thought ‘this is the place’.”

Jeremy, who has worked in real estate for many years, soon discovered that the house once belonged to French actress Danielle Darrieux, who appeared in more than 100 films in the 1950s over her eight-decade career.

After speaking to the locals, he learned that the pool, believed to have been built in 1938, had once been a popular meeting place, and many remembered learning to swim there.

Some even sent him photos of Darrieux, who died in 2017 at the age of 100, swimming in the pool during her stay at the house.

Darrieux, who along with Douglas Fairbanks Jr. appeared in the 1938 Hollywood movie “The Rage of Paris”, is said to have lived there for over ten years.

“That made me even more motivated to do the project,” he admits. “This place has a history. It has a story.”

The pool is said to have once belonged to French actress Danielle Darrieux, who died in 2017.

After weighing everything, Jeremy said he was cautiously making an offer that was “about 30 or 40% off the asking price,” and waiting for what he believes would be an inevitable rejection.

Although Jeremy has worked on several hotel renovations, this would be his first pool. The project also happened to cost about five times its original budget.

“It hadn’t been used for over 35 years, so it was a wreck,” he explains. “We had to start everything over.”

When it became clear that the cost of restoring the pool wouldn’t necessarily be economically viable in terms of adding substantial value to the home, Jeremy began looking at other ways to recoup some of the renovation costs.

Noting that there was no such pool in the area, he decided to rent it out for a few days a week, keeping it for his own use the rest of the time.

Jeremy says he managed to convince the owner to allow him to work on the pool before the sale was completed.

Determined to get the wheels moving as quickly as possible, Jeremy did his best to convince the owner to allow him to work on the pool before the sale was finalized.

He then began contracting with several companies to start the restructuring work, including a specialized swimming pool company, to transform it into “the most beautiful heated lagoon in France”.

Jeremy signed the contracts in September 2020, during the height of the Covid-19 pandemic. He says that by the time he officially became the owner in February 2021, nearly four months of work on the pool had already been completed.

When it came to design, Jeremy chose to go as “over the top” as he could.

Some locals who first swam in the pool when it belonged to Darrieux have stopped by to admire its transformation.

The project involved setting up new infrastructures for electricity, gas and water – the water previously came directly from a nearby river – as well as installing new electricity, creating stone rocks and installing pipes, evacuations and feeders under the pool.

Jeremy says the entire renovation process took about 12 months and cost 500,000 euros (about $500,000), with about 330,000 euros on the pool and the rest on exterior work, including the infrastructure, plants and terraces. He says he is very happy with the end result.

“It really does feel like you’re in a natural lagoon, except you’re within an hour of France’s largest city,” he adds. “There are waterfalls and you can jump from two meters high from the rocks. You don’t get the impression that you are in a pool.”

Jeremy was stunned to discover during the renovation process an old stone-paved path leading from the lagoon to the nearby river, with a fountain in the middle.

“That was a complete discovery. I suppose I can say that I am the only person in Paris who owns a private island,” he jokes, adding that he plans to renovate the path next year.

While the pool, which is 24 meters long and nine meters wide, with a depth of more than two meters, is undoubtedly the main attraction, Jeremy is delighted with his new home, which fortunately required very little work before moving in.

He has since imported and renovated a 1974 American Airstream caravan with a view of the lagoon.

Since moving to Courgent, which has a population of about 400, Jeremy says he’s settled in relatively easily and has gotten good feedback from locals about the pool.

Some villagers who first swam there when it belonged to Darrieux have even stopped by to ask if they can watch its transformation.

Darrieux had a long association with the city and apparently returned to the area later in life, just a few miles away from her former home.

While Jeremy says he’s gotten a lot of support from City Hall since moving to Courgent, he’s done his best to “don’t step on anyone’s toes.”

“You have to be careful,” he explains. “You don’t want to make too much noise, or have too much construction work [going on]. But it worked out pretty well.

The triathlete says he still feels overwhelmed when he takes a dip in the pool at night.

“One of the neighbors came up to me a little concerned because she heard I was going to have parties and someone said we were going to put a DJ in the trees.

Wanting to maximize his 1.5 acres of land as much as possible, Jeremy decided to import and renovate a 1974 American Airstream caravan that overlooks the lagoon and is also available to rent.

When he’s not enjoying the pool himself, hosting his daughters’ friends, or having the local school visit, he rents it out for about 250 euros for two hours, or up to 3,000 euros a day.

While it has received rave reviews from customers and onlookers alike, who sometimes stop by to ask for a closer look, Jeremy is eager to add some more special touches.

He plans to build a power line so he can light some trees, add a rose tunnel over the bridge and an outdoor kitchen.

“I’m not happy until all the details are in place,” admits Jeremy, explaining that it will probably take another year or two before the pool is completely ready.

Meanwhile, he takes full advantage of having a beautiful pool, or lagoon, with so much history at his disposal.

“Even now I’m still overwhelmed when swimming at night,” he says. “When it’s completely dark, you can see the moon and the stars, and only you, nature and the water.

“I always say it’s like being in Costa Rica without the plane ticket.”

Tags: 000 transformation of a 'lagoon' that once belonged to a famous actress - CNNThe $330trip
ShareTweet

Pilot shares three most common mistakes they make while flying