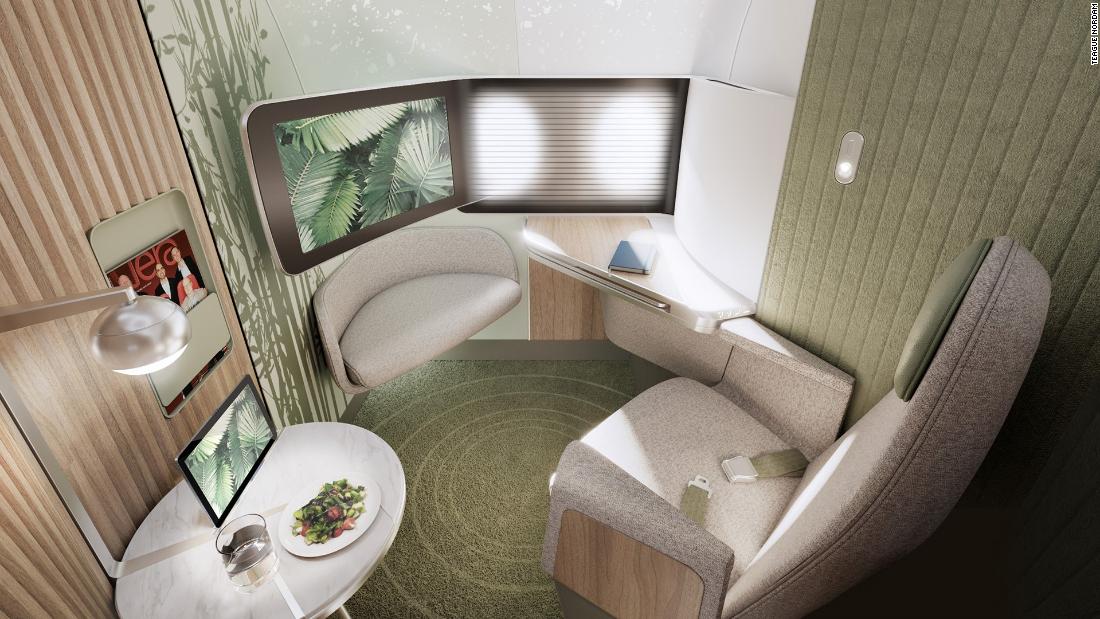 ‘Floating’ airplane cabin could be the future of travel

Editor’s Note — Monthly Ticket is a CNN Travel series that highlights some of the most fascinating topics in the world of travel. In June, we’ll take to the skies to check out the latest advances in aircraft interiors, including the people working to change the way we fly.

Hamburg (CNN) — A design for ‘floating’ aircraft furniture and a cabin concept that allows each passenger to have their own personal refrigerator are among the winners of this year’s Crystal Cabin Awards.

The prestigious aviation awards, highlighting innovation and creativity in aircraft interiors, were announced at a ceremony at the 2022 Aircraft Interiors Expo (AIX) in Hamburg, Germany.

Speaking to CNN Travel at the awards ceremony, Lukas Kaestner, president of the Crystal Cabin Award Association, said a team of industry experts spent a day surveying each submission before coming to their decision. The judges debated the creativity and ingenuity of the ideas, as well as taking into account responses from airlines and potential passengers.

Not all of the finalists’ products are on the market, or anywhere near that, Kaestner says. Many are just concepts. But “the underlying question in most jury decisions,” he explains, is, “Is it something that has a realistic chance of flying?”

After much discussion, the 24 finalists, already cut off a long shortlistwere narrowed to eight winners, with Teague and NORDAM’s Elevate cabin design, which visualizes a premium cabin with “floating” seats, taking first place in the Cabin Concepts category.

Speaking to CNN Travel earlier on AIX, the Teague team explained that the idea behind the concept was to “create more space” in the cabin, by attaching all the furniture to one rail connected to the side wall and the aisle.

The idea, the Teague team said, came about when aircraft designers were chatting over a beer at AIX three years ago. The designers and engineers realized they were all dealing with the same problem: freeing up space in aircraft cabins without losing seats. They started to come up with a solution.

Meanwhile, Collins Aerospace’s passenger refrigerator concept, called SpaceChiller, won the award in the Passenger Comfort category. The Crystal Cabin jury was intrigued by Collins’ claim that the refrigerator would consume half the power of traditional aircraft refrigerator designs. The fridge’s potential to scale up or down, allowing for a mini version to be placed within easy reach of a potential passenger was also a draw for the judges.

Nominees who missed the evening included Collins Aerospace’s non-reclining business class seat Airlounge, which premiered earlier this year on Finnish airline Finnair, and Pexco Aerospace’s pandemic-inspired AirShield Deviceco-produced with Teague, which is designed to improve airflow in aircraft and create an invisible “shield” around individual passengers.

The Crystal Cabin Awards often see some of the most innovative entries crop up in the University category, where the next generation of aerospace designers offer their take on the future of flying.

Some, like Alejandro Nunez Vicente, nominated in 2021 for his double decker airplane seathave gone on to found their own start-ups.

This year’s student winner is Ken Kirtland, of the Georgia Institute of Technology, who invented a zero-emission electric aircraft called Portal, which would use underutilized regional airports and fly at lower altitudes.

With airline passengers increasingly clamoring for more sustainable options and the industry increasingly forced to deal with the grim realities of their carbon footprint, Kirtland’s design caught the attention of Crystal Cabin judges.

Portal’s distinctive interior also played a part in Kirtland’s win – the idea being that the cabin would have premium seats scattered throughout the cabin, allowing passengers to enjoy expansive views of the sky.

For Kaestner, the University category summarizes what the Crystal Cabin Awards are about.

“We want to drive innovation and only create or fuel the discussion about passenger experience,” he said.

Tags: 'Floating' airplane cabin could be the future of travel - CNNtrip
ShareTweet