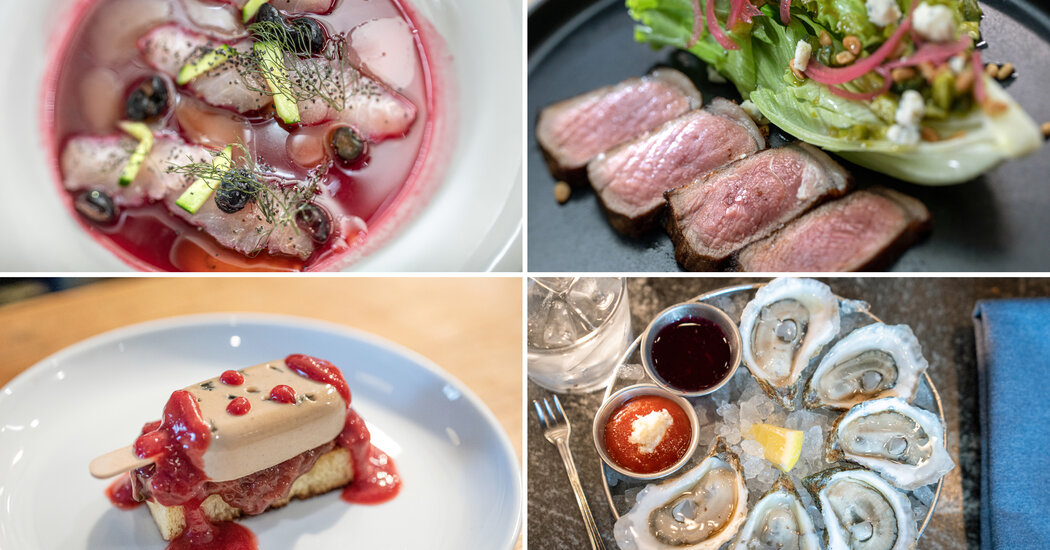 If there is one well-known tourist destination in the state of Connecticut, it is the coastal town of Mystic. Whether for the seaport museum commemorating the maritime heritage, the aquariumThe sea lions and beluga whales, or the charming downtown, lined with boutiques and anchored by a bascule bridge celebrating its 100th anniversary, attracts approximately 1.5 million people from out of town each year, according to the Greater Mystic Chamber of Commerce.

But these days, people come to the city of less than 5,000 for a more specific reason: food. In fact, there is a whole swath of southeast Connecticut that is experiencing a culinary revival.

The area has long been associated with weathered shacks serving mussels and lobster rolls. Today, you’re likely to find barbecue monkfish cheeks and empanadas stuffed with local squid, perhaps served with a hibiscus margarita or orange pét-nat. The transformation is profound.

It started with a bakery

You could say that a bakery was the tipping point. In 2016, Adam Young, who was an executive pastry chef at the luxury Ocean House resort in Watch Hill, RI, opened his French-inspired bakery, Sieve Bake Shop, in Mysticism. It caught the attention of a local crowd for its 81-ply croissants and sticky buns dipped in fudge sauce. Then Mr. Young in 2017 on Food Network’s “Best Baker in America”. He won in 2018. Madness followed.

“It used to be like Disney,” says Mr. Young about the early days. “You would queue outside for 30 minutes and then go through the door, and there would be another queue inside.”

Over time, Mr. Young and his team redesigned the space and process in the Water Street clapboard building to be more efficient. They also added a rooftop barand opened Donuts with young sandwiches around the corner on the main road from Mystic. Although waiting times at Sift Bake Shop are now shorter, queues of enthusiastic guests still arrive daily.

Not that croissants only put Mystic on the map. When Dan Meiser and James Wayman opened Oyster Club, a restaurant dedicated to local seafood and produce on Water Street in 2012, it sparked a craving for fine dining. While there were many restaurant options back then, no destination was necessary.

“We saw an opportunity to take advantage of the area’s great farming and seafood and create a restaurant that was part of the regional, even national conversation,” explains Mr. Meiser out.

Oyster Club, which is now part of Mr. Meiser’s restaurant group, 85th Day Food Community, continues to serve fresh-flavored local vegetables, meat, and fish. Native monkfish, for example, are prepared with shio koji buttermilk and polenta made with Davis Farm corn, which has been in business since 1654.

Mystic seems to be the most buzzing place in New England these days. Places like the port of calla nautical-themed cocktail lounge, which hosts drag shows and serves small plates such as crispy boqueróns made with local smelt and beef tongue ggyros, and Nana’s Bakery & Pizza (co-owned and run by Mr. Wayman, who parted ways with Mr. Meiser last year), which offers made-to-order donuts and pizzas made from organic, naturally leavened dough, are making it onto “best of” lists. The ship’s carpenter’s daughterAnchoring the Whaler’s Inn, a more than 100-year-old property across from the Mystic River that’s been updated to have a beach-chic contemporary feel, is the latest restaurant to earn accolades for its worldly spin on sustainable seafood, such as Block’s fluke Island Sound, drizzled with a spicy green romesco sauce and served with roasted summer squash. It is run by David Standridge, who was lured out of New York City by the beauty and wealth of the area.

“It’s a kind of paradise,” says Mr. Standbridge over the beaches, farms and boating community. Sure enough, look through the window of the restaurant’s elegant deep-blue dining room and you’ll see kayakers and sailboats flashing along Mystic River, surrounded by rolling green hills.

The marching band is not limited to Mystic.

Old Saybrook, about 22 miles to the west, has evolved and streamed over the decades as a popular seaside town. The bustling downtown area with major chain stores belies a perimeter of breathtaking beaches and green waterfront properties.

The Rat Pack used to play in the old Terra Mar Hotel – now the luxury Saybrook Point Resort & Marina — and, after spending the summers of her childhood in the Fenwick borough, actress Katharine Hepburn retired there until her death in 2003. It’s a point of pride for the city. The Katharine Hepburn Cultural Arts Center – the Kate – is located on Main Street in what was once City Hall, which houses a museum and a playroom that alternates concerts, theater productions and films, including Hepburn classics.

“Old Saybrook is moving in a direction to become the next Mystic,” said Colt Taylor, the chef and co-owner of the Essex, which opened a stone’s throw from the Kate in December 2021. It’s a slick restaurant that a few years ago might not have drawn guests for its five- and seven-course tasting menus as it does today. Mr Taylor had launched the restaurant in 2017 in Essex, north along the Connecticut River. While the taco joint the charros which emerged from that location in 2018 is booming, the appetite for heightened dining concept never got the better of it as it is now in Old Saybrook.

Foie gras “popsicles” and lobster served on a bed of beet fusilli may seem stuffy, but Mr. Taylor wants it to be anything but. An open kitchen and chef’s counter and a marine-themed mural above the sprawling bar make for more fun than formality.

The desire to raise expectations is also Joel Gargano’s intention. In late July, the chef and his wife, Lani, opened Gargano Pasta & Italian Market — also on Main Street — which they describe as Eataly with a New England flair. “We need to get rid of the stigma of dockside seating,” said Mr. Gargano, a Connecticut native, who complained about the shoreline’s reputation for being competent only with fried foods.

In addition to Italian pastries, salumi and formaggi, and items prepared and made to order, there will be a pasta lab, where you can watch chefs at work and get their recommendations for which sauces go well with which pastas. “We want to take the products we like to use,” says Ms. Gargano. “It’s a form of our hospitality, of ‘This is what I have to give you.'”

The 8,000-square-foot dining room also has breads made with local grains, such as red wheat from Skowhegan, Maine, and spelled from Oechsner Farm in New York. This bread, along with dishes such as rigatoni integrale, which uses a roasted Maine Grains rye that can withstand a hearty beef ragù Bolognese, is a favorite of the Garganos’ burnt wheat restaurant in nearby Chester.

The polished Italian spot brought shine to the small town when it opened in 2017. An artsy enclave of 3,800 residents, Chester was founded in 1692 along the Connecticut River. The town has a history of shipbuilding and milling and is full of colorful houses from the 17th and 18th centuries, along with oaks and maples, some with a diameter as wide as golf carts. Now it is also seeing a revival, supported by a strong food scene.

It was Chester’s Sunday Market that originally lured the Garganos to the city. Vendors selling produce, pastries, cheese, fish and meat to the beat of live music have shut down Main Street for a few hours every Sunday from mid-June to mid-October. The pride and joy of the residents is best illustrated by Chef Jonathan Rapp of River Tavern, another celebrated Chester restaurant championing local produce. This is where he gets his inspiration and ingredients for Dinners at the Farm, a Sunday night series that runs for 10 weeks each summer and may include dishes like cool bell pepper and heirloom tomato soup with panzanella and pesto, and a peach-and-blueberry cake with neighboring ice cream. Honey Cone Artisan Ice Cream.

“The biggest part is the contagiousness of this,” says Mr. Gargano on the hunger for more sophisticated and creative cooking that he and other chefs see. “Four years ago we didn’t sell that many tasting menus and that’s very exciting.”

Now the question is, will the same magic happen elsewhere? Later this month, Sift will open in Niantic, halfway between Mystic and Old Saybrook and the river towns. It will be in a new building, home to other eateries.

Niantic, a village in the town of East Lyme, where I grew up (shout out to the Vikings), is enjoying a slow but steady rise as a tourist destination. A 1.1-mile boardwalk along Niantic Bay was completed in 2016, after more than a decade in the making. Chains on the main strip, such as McDonald’s and Friendly’s, have been replaced by independent establishments such as Devs on Mainserves small plates of Asian and Latin infusion, and Gumdrops & Lollipops, a classic candy and homemade ice cream parlor. Last year, Llorona opened, bringing Southwestern Mexican flavors and ingredients to an area that hasn’t seen much spice.

“It’s very mystical, circa 2015,” said Mr. Young of Niantic’s momentum. “A lot of talented entrepreneurs come to the city and start investing.”

The results have been very satisfactory so far.