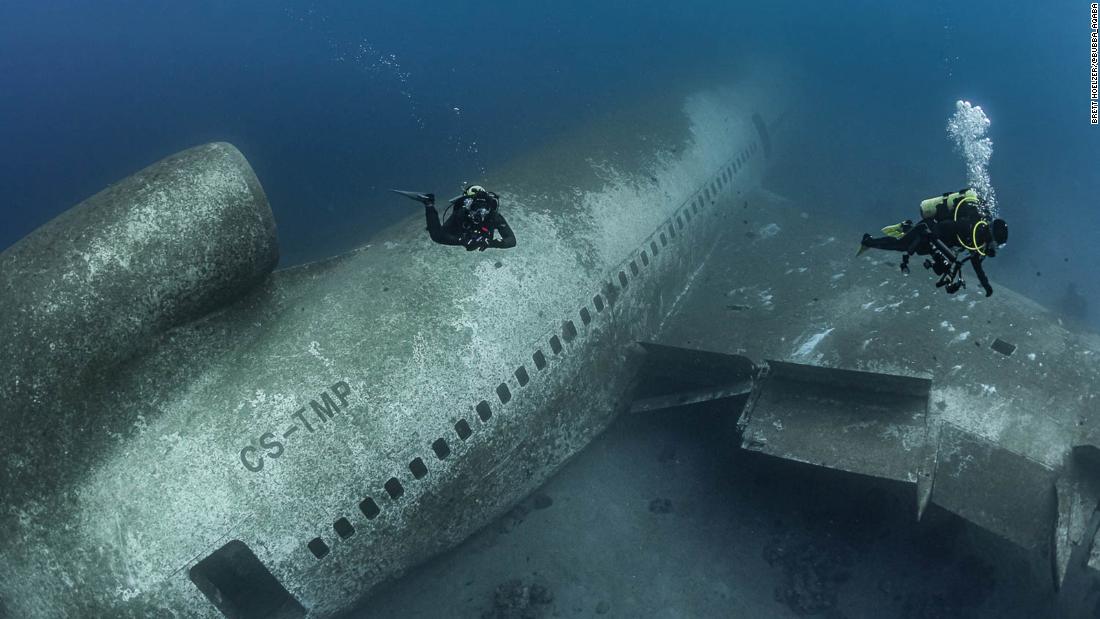 (CNN) — Encountering this unexpected shape on the seabed is enough to take your breath away – so it’s a good thing you probably have a tank full of breath strapped to your back.

The venerable old Lockheed Martin L1011 Tristar aircraft, with its three engines, mounted on wings and tail fin, would be a sight to behold in the air or on the ground, let alone deep beneath the surface of the Red Sea, between the fish and coral.

The abandoned jet, which was scuttled in 2019 to create an artificial reef to encourage marine life, has been photographed by American underwater photographer Brett Holzer in a series of images that capture the eerie spectacle created by this seaplane. is created.

The three-engine Lockheed Martin Tristar flew for commercial airlines in the 1980s and 1990s.

According to Holzer, the jet has now become a haven for wreck explorers and underwater photographers.

It was first registered in the 1980s and was used by several airlines, including, according to Planespotters.net, Royal Jordanian, Portuguese TAP Air and Swedish Novair, before, after a final stay with Luzair, another Portuguese airline. , was discontinued in the early 2000s.

After years of being parked and apparently forgotten at King Hussein International Airport near the Red Sea coast, the plane was scuttled in the Jordanian Gulf of Aqaba with the aim of encouraging diving tourism and coral growth, according to Jordan News Agency Petra.

“The cockpit is the shallowest part of the wreck and faces the beach at about 13 meters,” Holzer told CNN Arabic.

Floating in an airplane

Divers can explore the cockpit and cabin.

Professional divers can enter the wreck through two doors behind the cockpit.

In the Tristar’s hull, the center row seats have been removed to allow for easier access for divers, but otherwise the jet is surprisingly well preserved.

The cockpit, rows of seats on either side, toilets and galleys are still in place, allowing divers to soar around a largely intact commercial passenger jet, the photographer says.

After three years in the water, the plane’s wings are now home to numerous soft corals. The hull is surrounded by huge sponges populated by a variety of marine life.

“It’s not uncommon to see octopuses feeding near the coral heads,” Holzer says. Puffer fish can also be seen.

The real thrill, he says, is the uniqueness of exploring a passenger plane on the seabed.

His underwater photos have been a hit on Instagramwith some of his followers now planning their own visits to the Gulf of Aqaba to see the wreck.

However, Holzer stresses that this adventure may not be for everyone.

Because of the depth, he says, divers will need to be fully qualified professionals. He also recommends making early reservations, as you need a boat to visit.