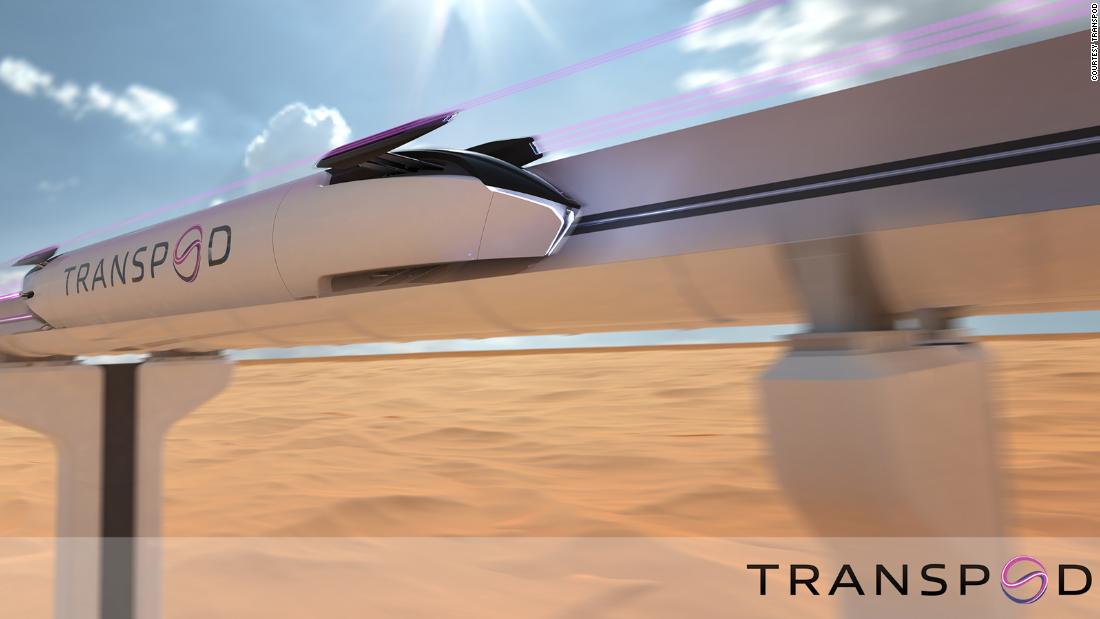 (CNN) — A Canadian company has unveiled plans for an all-electric, train-style vehicle that could travel 1,000 kilometers per hour and say it would cost less than a plane ticket to travel further.

FluxJet was announced last month by TransPod in its home city of Toronto, featuring a scaled-down one-ton version of what it calls the “airplane-train hybrid” in a live demonstration of its capabilities.

It is based on similar principles to the “hyperloop” concept made famous by American entrepreneur Elon Musk: FluxJet will be propelled at ultra-high speeds along a protected tube conduit using groundbreaking technology based on a new field of physics called “veillance”. flux”.

TransPod hopes that Fluxjet will be operational by 2035.

The pods are magnetically levitated and the vacuum tubes allow them to travel at great speed.

The idea is that the train will run exclusively on a network system called the TransPod Line, with stations in major cities and key locations.

The proposed first phase of what is estimated to be an $18 billion infrastructure project will connect the Canadian cities of Calgary and Edmonton — about 300 miles apart, or a three-hour drive.

FluxJet has a faster travel speed than an airplane and three times that of a high-speed train, meaning the travel time would be reduced to 45 minutes.

Earlier this year, the TransPod announced that it has secured $550 million in funding for the endeavor so far. The project is currently in the research and development phase, focusing on environmental impact assessment and land acquisition.

Sebastien Gendron, co-founder and CEO of TransPod, tells CNN that “the first phase of construction consists of the Edmonton airport connection, which is expected to start in late 2023, and the entire line connecting Calgary to Edmonton. in 2027.”

The network will carry up to 54 passengers and 10 tons of cargo at a time in FluxJet vehicles, with trains departing every two minutes, according to TransPod’s vision.

The company says the new system will greatly reduce traffic on the highway and cut CO2 emissions by about 636,000 tons per year.

It claims that riding the FluxJet will cost about 44% less than a plane ticket for the same trip, but no timeline has yet been announced for when the public could expect to travel on a FluxJet, or what other cities might be part of it. billion-dollar network, those projections seem to contain a fair amount of guesswork about how the next few years might turn out.

There is talk of a service between Dubai and Abu Dhabi.

TransPod says its focus is on first-in-the-world design and technology breakthroughs and that it “develops every aspect of a new tube conveying system, from design to system engineering, from the ground up, all in-house and with our partner.”

The magnetically levitating Fluxjet trains will shoot down their guides using aerodynamic and propulsion systems designed to reduce friction. TransPod says the experience will “have the feeling of accelerating smoothly on a fighter jet runway and then rolling into the tube guide at full speed.”

Gendron tells CNN that his team estimates that FluxJet will carry its first public transit passengers before 2035. And as for plans outside of Calgary-Edmonton, he says: “Talks are already underway in Texas to connect Dallas to San Antonio, in the UAE to connect Dubai to Abu Dhabi and in Australia to connect Sydney to Brisbane.”

Weekend in Cannes: a 48-hour stay in this jewel of the French Riviera