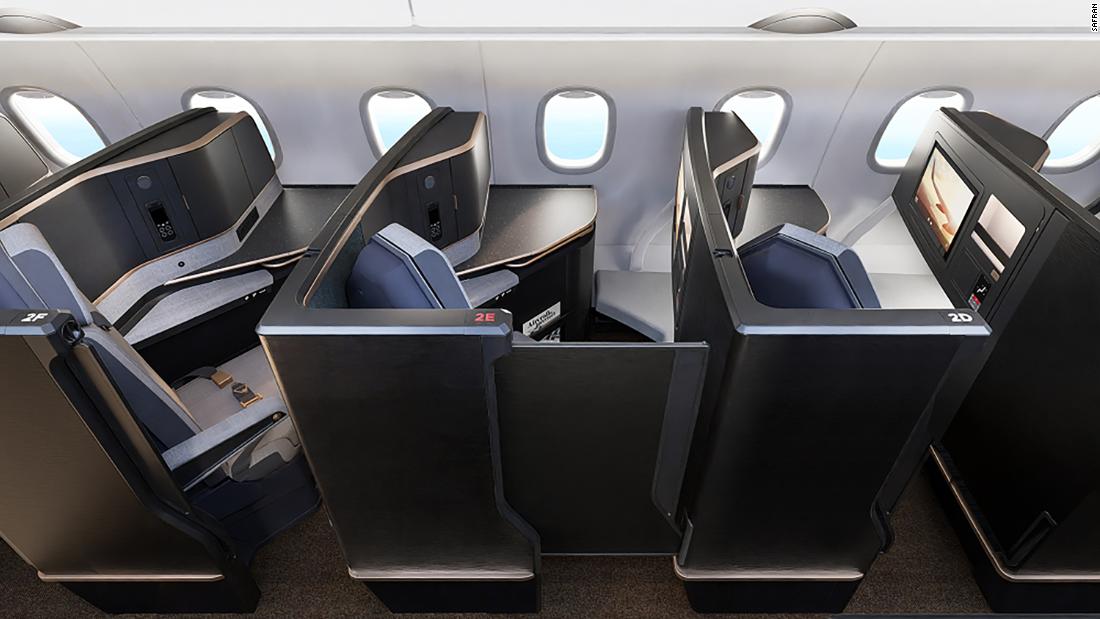 (CNN) — Business class is becoming more and more luxurious, more spacious and private. Whether it’s custom-designed seat and bed cushions, custom fittings and fixtures, or co-branding with some of the biggest names in luxury, doing business really is the new first-class aboard many aircraft.

That’s especially true in business-class mini-suites with doors, which debuted nearly 10 years ago aboard JetBlue’s Mint premium aircraft, and can now be found on a dozen airlines, including Delta, All Nippon Airways, British Airways and China Eastern. with more rolling out every year.

Doors make the business class experience better in two ways: first, they add privacy, and second, they avoid what airline seat designers call the “brush fit,” where a passenger or crew member walking down the aisle bumps into a seated passenger.

If you’ve traveled in business class, you may already be thinking of some seats where that would be particularly beneficial.

One can be the different types of staggered layouts where some seats are right next to the aisle but others far away from the aisle, on the other side of a small console table. Another option is the angled herringbone layout where the seats face the aisle and you have to avoid eye contact with the person in front of you throughout the flight.

Doors help prevent that, of course. But while these mini-suites with doors are more private than many first-class seats, the word “mini” is in their name for a reason: The space for each passenger, while huge by economy, is still smaller than first-class.

Adding a few inches to accommodate a door can really affect the amount of space available for your seat.

That’s certainly a nice problem to have, you and I might think from our 17-inch narrow seat in row 54, but every fraction of an inch of the cabin width is used, and on some mid-sized planes like the Boeing 767 or 787 and the Airbus A330 or A330neo, that can really make a difference to how roomy a seat feels.

So why do airlines choose doors, even on some of those mid-sized planes?

“There is undoubtedly a movement towards more privacy in aircraft, moving from first class, where the full-height Emirates suite set a new standard, to business class,” said Collins Aerospace’s vice president of sales. and airline seat marketing, Alastair Hamilton, to CNN.

“Most business class seats have had privacy shells for a number of years, which take other passengers out of your eye line when everyone else is seated. The addition of doors further enhances this sense of seclusion, cutting you off from the aisle, especially when lying flat in bed position .

“So are doors necessary? Of course not. But they are a passenger benefit that improves privacy and, critically, rest and sleep on a long flight.”

Weight and space versus turnover

Hamilton adds that doors can add cost, weight and complexity to a seat, but can bring in more revenue.

“From the passenger’s perspective, the ability to close the door and have ‘my space’ will always be perceived as an advantage,” he says. “The more the aisle is in the eyeline, the greater that benefit, especially as the passenger sleeps. Airlines are leaning towards doors and increasing privacy in general as they continue to improve the passenger experience.”

Some airlines say no.

Quentin Munier, executive vice president for strategy and innovation at Safran Seats, tells CNN that demand for doors will often be on a case-by-case basis, depending on comfort requirements or seating layout.

“Doors have been out for a few years now and year on year we see a steady increase in the proportion of airlines requesting doors in our surveys or in actual RFQs – to a point where a large majority of airlines are now requesting them.

“The question will be less and less about whether or not to have a door, but more about how to deliver smartly and effectively.”

The question will also be whether non-door options can meet the need for privacy and save on weight and space.

Safran has an option that essentially resembles a thick, horizontal, magnetically attached, spring-loaded roller blind that extends across the door space. Other options include a curtain like Air France uses in its premium seats, room dividers that expand and retract like a hand-held fan, or extendable panels that don’t quite mimic the door but add substantial privacy.

All of these have compromises, which is why Chris Brady, an industry veteran and the founder of the start-up chair maker Unum, says airlines are divided on the issue.

“Everyone recognizes that doors are heavy and complex… with a lot of hidden complexity because of the certification requirements,” Brady says.

“I think it’s fair to say that doors can improve the passenger experience, but for outward-facing herringbone at temperatures above 40 degrees, looking away from the aisle, the contribution is marginal.”

That kind of seat, at such a wide aisle corner on a single-aisle aircraft like the Boeing 737 or Airbus A320 family of aircraft, is what Unum creates as its first seat, alongside other seat manufacturers that are both starting and established.

“I’m a little confused,” Brady admits. “As a passenger I like a door. I find flying a wonderfully isolated experience and enjoy being alone, and a door helps. As a citizen I know they are heavy”, which also means more CO2 emissions.

The door question will remain as more airlines and more seat manufacturers weigh up the benefits.

But, Brady says, “a brave airline can and should remove them.”

Tags: Business class doors for aircraft offer new levels of privacy. Here's Why They Might Not Be A Good Idea - CNNtrip
ShareTweet