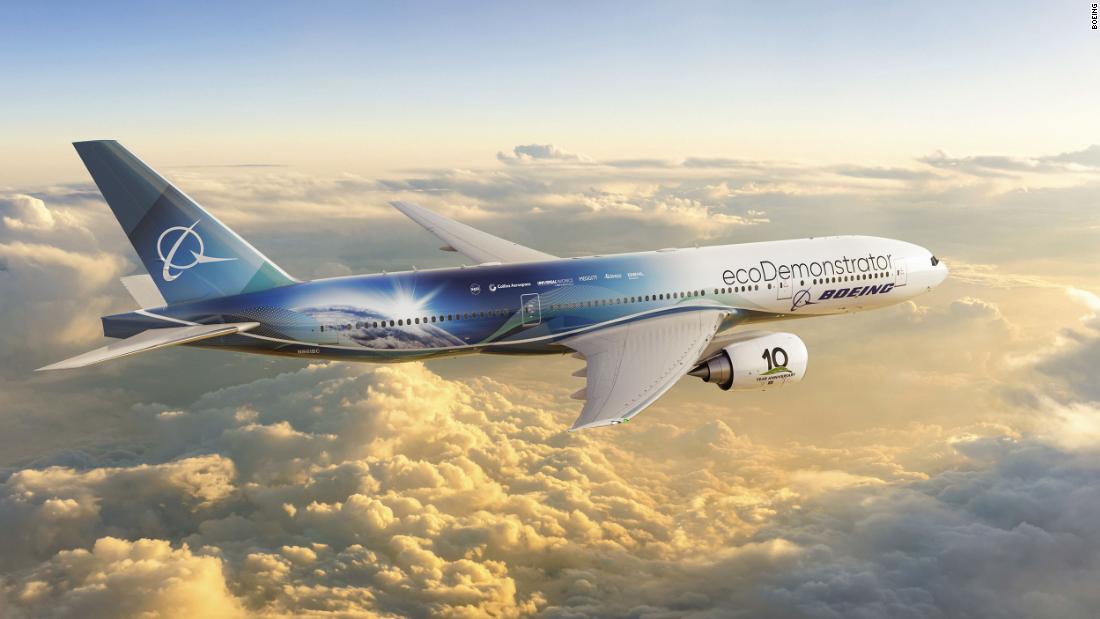 The ecoDemonstrator will reportedly undergo a series of six-month tests starting this summer, both on the ground and in the air.

Among the 30 or so technologies being tested during the campaign are projects designed to reduce fuel consumption, emissions and noise, while using more sustainable materials.

For example, Boeing is working with NASA to produce SMART vortex generators — small vertical vanes on the wing designed to improve aerodynamic efficiency during takeoff and landing.

Other projects include a system designed to conserve gray water on board — water washed in the sink will be used to flush toilets, which will also reduce the weight of the aircraft.

The aircraft will also be used to conduct tests on an “environmentally friendly” refrigerant, a new fire extinguishing agent to reduce greenhouse gas emissions and a heads-up improved pilot vision system to improve operational efficiency.

Meanwhile, Boeing will continue its extensive study on the impact of sustainable jet fuel on emissions reduction.

The aircraft maker says the team plans to power the 777-200ER with a 30/70 mix of sustainable aviation fuel (SAF) and conventional jet fuel.

Launched a decade ago, Boeing’s ecoDemonstrator program takes technologies out of the lab to test them in an operational environment.

In total, it tested about 230 technologies “to decarbonize aviation, improve operational efficiency, and improve safety and the passenger experience.”

The Boeing 2022 ecoDemonstrator will test 30 technologies to improve safety and durability.

The 2022 ecoDemonstrator aircraft, registration number N861BC, was first delivered to Singapore Airlines in 2002 and then spent time with Air New Zealand and Suriname Airways during its 20-year lifespan.

It has been repainted with an Earth-themed livery, which Boeing says marks a decade of testing to reduce fuel consumption, emissions and noise.

“Boeing is committed to supporting our customers and enabling the commercial aviation industry to meet our shared commitment to reduce carbon emissions by 2050,” said Stan Deal, president and CEO of Boeing Commercial Airplanes, in a statement.

“The rigorous testing of new technologies through the ecoDemonstrator program further improves the environmental performance of our products and services and is invaluable in continuously improving safety.”

According to Boeing’s statement, about a third of these tested technologies have already been incorporated into its products and services.

The aviation industry has long pushed for creating a more sustainable flying environment, despite mounting criticism.

At its annual meeting in October 2021, IATA, the International Air Transport Association, announced a resolution supporting net-zero carbon emissions by 2050.

At this year’s IATA AGM, taking place June 19-21 in Doha, Qatar, a “Focus on Sustainability” session will address relevant industry issues, including single-use plastics, SAFs and the challenges of achieving sustainability – including net zero carbon emissions by 2050 .

Earlier this month, Spanish airline Air Nostrum announced that it… Order 10 new hybrid airships† The Airlander 10 aircraft are expected to be delivered in 2026. The airships, made by UK-based Hybrid Air Vehicles, could cut emissions by 90%, the company said.

Inside Dubai's Museum of the Future - CNN Video