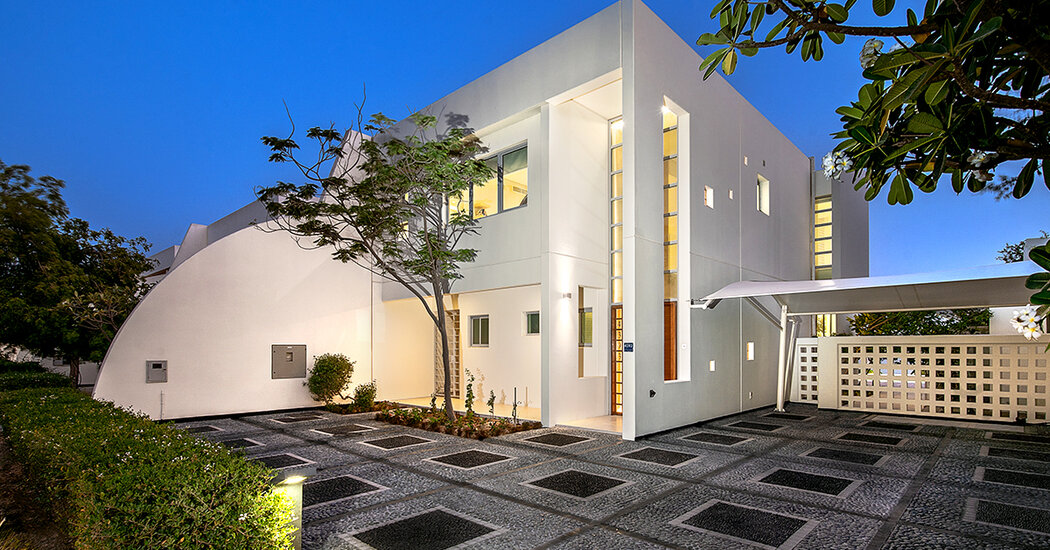 A three bedroom villa on an island in Bahrain

These three bedrooms on the water villa is located on an artificial island in the Persian Gulf, part of a massive resort development called Durrat Al Bahrain, off the southeastern tip of Bahrain Island, the largest island in the Bahrain archipelago.

The modern concrete and brick villa was built circa 2009 on a 0.18-acre lot and completely renovated last spring, said Jacqueline Maxwell, a senior sales and leasing agent at Savills Middle East, who has the listing.

With approximately 3,200 square feet of living space, the house includes rooms for a maid and driver. The interiors were designed by Shaikh Rashid bin Khalifa Al Khalifa, an artist and member of the Bahraini royal family. Furniture is included in the asking price.

Outside, there’s a new pool and new 32-foot boat dock in the Persian Gulf, along with a fully-equipped outdoor kitchen and barbecue, Ms. Maxwell said.

The front door opens into a hallway with a guest bathroom and the maid’s room to the left. Straight ahead is the open plan living and dining area, with a wood fluted panel ceiling and integrated lighting. Floor-to-ceiling sliding glass doors open to the pool deck and Gulf views.

There are two kitchens; the main has a breakfast bar that opens out to the living room, Corian countertops and stainless steel Bosch appliances, said Ms. Maxwell.

A wooden staircase with a glass balustrade leads to the three en-suite bedrooms, each with French parquet floors and built-in wardrobes. The main bedroom and an adjoining bedroom have access to a large balcony overlooking the water. The primary bathroom is finished in Vietnam white marble, while the other bathrooms are finished in various types of marble, terrazzo and Burmese teak.

The 22-by-15-foot pool was redone with custom Art Deco tiles, and the patio is made of ceramic tiles designed to resemble parquet. Next to the pool is a separate structure with a bathroom, a pump room and the driver’s compartment.

The property is landscaped with Washingtonia palms, along with various shrubs and plants that can tolerate heat and salt, Ms. Maxwell said. The villa’s carport is covered with new Ferrari parking screens, she said.

The property is located on an island called Petal 2 in Durrat Al Bahrain, a resort development of 15 man-made islands, some shaped like fish or atolls, connected by causeways and bridges. The reclaimed lands, slated to house up to 60,000 residents and 5,000 visitors upon completion, are home to thousands of villas and apartments, along with hotels, restaurants, shopping malls, boardwalks, sports facilities, spas and a marina.

White sandy beaches adorn the various islands and the villa is about 350 meters from a beach. While there are services such as groceries and mosques in Durrat Al Bahrain, hospitals and the international school are about a 30-minute drive away in Riffa, and the villa is about an hour south of Manama, the capital of Bahrain, and the international airport, Ms. said Maxwell.

The Kingdom of Bahrain, an archipelago between Saudi Arabia and Qatar that includes Bahrain’s main island and dozens of smaller islands, has grown in popularity with foreign retirees and investors, in part due to the appeal of a safe and peaceful lifestyle, the low cost of living and a cosmopolitan population.

Bahrain is considered more liberal in the Gulf Cooperation Council than neighboring countries such as Saudi Arabia and Qatar, for example allowing women to work and drive. And although Arabic is the national language, English is widely spoken.

For many foreigners introduced to the region through their work, “Be it Americans or British, you honestly can’t get them out of Bahrain,” said Taimur Khan, head of research for CBRE Middle East and North Africa. “They really love it. It is a very enjoyable lifestyle for them.”

Despite increasing population growth and an influx of foreign residents, Bahrain has experienced a weakening housing market in recent years due to an oversupply of housing, brokers said.

“A large number of apartments and villas have come onto the market over the past three years,” said Ms Maxwell. “In addition, buying is primarily intended for investment, and given the lukewarm demand in the rental market, there is a consistent impact on the sales market.”

“The travel restrictions, quarantines and decline in tourism naturally impacted the residential market as a result of restrictions limiting the number of viewings,” said Ms Maxwell. With restrictions lifted and buyers returning, “the numbers are on track to return to prepandemic levels,” she said.

“We have seen the market return to price growth in most market segments,” said Mr Khan. “There’s still a bit of supply in the market so there’s fragmentation in how areas are performing, but I think there’s optimism in terms of where the economy is headed and some of the structural reforms the government has put in place.”

Last year, the government of Bahrain introduced a Golden Residency Visa, which allows certain non-residents to obtain a long-term visa, including those who own a property worth at least 200,000 dinars ($527,000), said Bader Nass, the founder and director of InfoReal Estate, in Seef. “We’re seeing an effect,” he said. “It has increased the demand from foreigners who have been granted the Golden Visa.”

Foreigners in Bahrain are restricted from buying in the property areas, which are mostly islands and reclaimed areas, and include Durrat Al Bahrain, as well as Seef, Reef Island, Juffair, Amwaj Islands, Dilmunia Island, Diyar Al Muharraq and Riffa Views, brokers said.

New construction continues in Bahrain — much of it in Diyar Al Muharraq, a complex of seven artificial islands near Manama — with about 9,000 new units expected by 2026, likely to push rents further, Mr. Khan.

Currently, average house prices in Bahrain are about half that of comparable properties in Dubai, in the United Arab Emirates. “So there’s a significant discount as such,” Mr Khan said. “And the cost of living is generally cheaper than most places in the Middle East.”

Who buys in Bahrain

About 75 to 80 percent of sales in Bahrain are made by people from the Gulf Cooperation Council countries, mainly from Bahrain and Saudi Arabia, Ms Maxwell said.

Many of the remaining buyers are British, Indian and Pakistani, Nass said.

The process of buying a house in Bahrain is quite simple with the only restriction for foreigners being that they have to buy in one of the property zones, Mr Nass said.

With a system of government and private notaries to handle the sale, there is no need for a lawyer, Ms Maxwell said.

Government registration fees are 1.7 percent of the sale price if paid within 90 days, and 2 percent after that up to a year, she said. The buyer and seller each pay a 1 percent commission to the broker.

Several banks and finance companies in Bahrain will provide mortgages to foreigners, under the supervision of the Kingdom’s only regulatory body, the Central Bank of Bahrain. “Most banks in Bahrain provide up to 80 to 90 percent financing for the purchase of villas, apartments or land for Bahrain, although this amount is lower for foreign buyers, closer to 75 percent,” said Ms Maxwell. “Bahrain bank lending rates are falling in a range of 5 to 7 percent.”

There are no annual property taxes, although the annual homeowners association and service fee for a villa of this size is about 1,700 dinars ($4,480), Ms. Maxwell said.

See the world's only CO2-neutral spaceship'