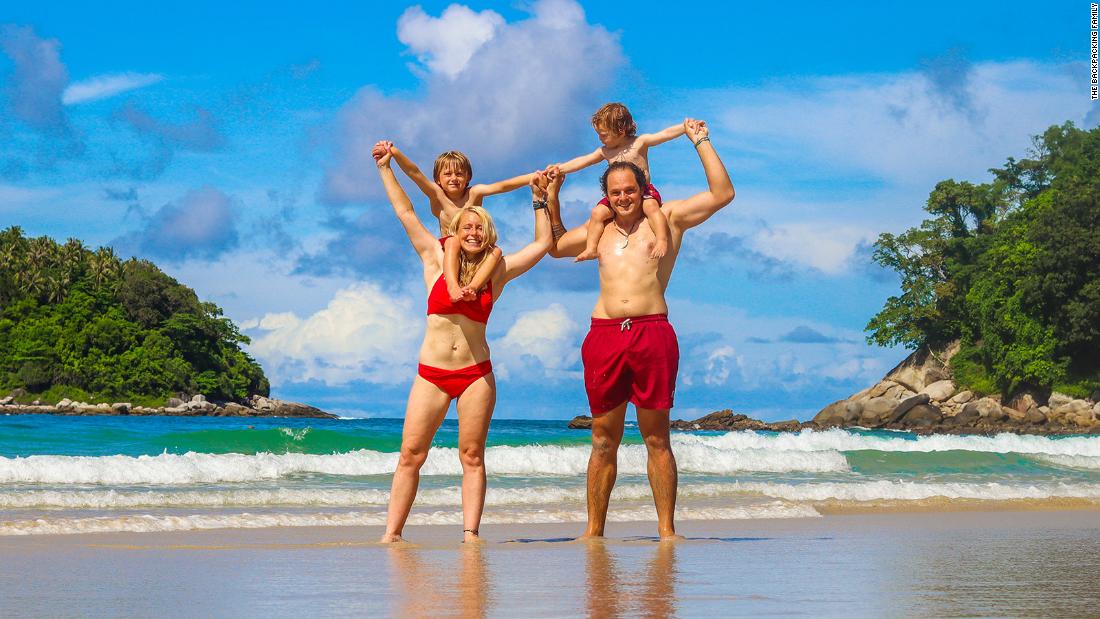 But in recent years, more and more parents are choosing to take their children on long journeys around the world.

In fact, a recent travel trend report from American Express Travel found that 76% of parents surveyed plan to travel more with their families by 2022.

For those traveling with children for extended periods of time, this often means taking them out of traditional school and homeschooling along the way.

However, it is certainly no mean feat to try and provide their children with a quality education while living a backpacker lifestyle, and in some cases working remotely.

Here, parents who have chosen to backpack with their kids discuss the joys and challenges of homeschooling while living out of suitcases.

Emma and Peter Tryon have been touring the world since 2021 with their sons Hudson and Darien.

It was a passion for travel and adventure that brought Emma and Peter Tryon together in 2011.

The British couple, both teachers, started dating when they were both on separate backpacking trips in Cambodia, taking many vacations together before getting married and having two sons, Hudson, now five, and Darien, now two.

While planning to stay in one place once they became parents, they soon grew restless and the temptation of globetrotting with their kids in tow proved too tempting to resist.

“We were drawn to the idea that there is a different way of life,” Emma Tryon told CNN Travel.

After months of saving and planning, they sold their house, officially kicked their oldest son out of school, and went on a trip.

“I understand why people would think we’re crazy,” she adds, admitting that they initially wondered if they were doing the right thing.

“When I had to sign the papers to formally opt out of British education, it took off. I just saw it in black and white. I thought, ‘This is a big problem.'”

Under UK law there are no specific requirements for the content of homeschooling, just that parents must provide their children with appropriate education.

Peter Tryon emphasizes that one of the main factors behind their decision was the desire to spend more time together as a family.

“We have found that the adventure, spontaneity and challenges of travel bring us together and also create the opportunity to bond in a unique and strong way,” he says.

For the past year, the Tryons have traveled through much of Thailand, as well as Singapore and Malaysia, juggling homeschooling.

While they don’t regret it, both admit that their new lifestyle comes with challenges. While being a teacher herself has proven to be an advantage in many ways, Emma Tryon feels that they may have “gone too hard with the teaching” at the beginning, explaining that they’ve gone for a more relaxed approach ever since.

“You’re so used to going to school in a more traditional way,” she explains. “We have taken a lot of misconceptions into home schooling.

“But it’s amazing how fast, fast, natural and easy learning becomes when it’s done by living consciously and learning as you go.”

In terms of structure, the couple each have one-on-one “deliberate” class periods of about 30 minutes with both their sons in the morning, and have found that this sets them up well for the day.

Emma with Hudson and Darien while visiting Thailand.

According to the couple, Hudson and Darien are making good progress and benefit greatly from individual lessons.

“One of the things I like to see lately is that our [eldest] son actually wakes up and asks when are we going to school,” says Peter Tryon. “It gets him excited.”

Apart from the morning learning periods, their teaching sessions are relatively informal.

Peter Tryon, who describes himself as a “science madman,” says he often uses swimming sessions to conduct floating and sinking experiments with the kids, and recently taught his oldest son about buoyancy while they were in the water.

“There’s so much science in all the things we do,” he says. “So instead of teaching it as a theoretical subject in the classroom, we have all the experiences and resources around us in the world.”

The couple recently started work on a new structure where they backpack for a month and in one place for the next four weeks.

“That works really well for us as a family,” adds Emma Tryon.

Once they leave Malaysia, the family hopes to travel to Cambodia and then Vietnam, before heading to Bhutan, Nepal and Indonesia.

They also have some educational trips to Egypt, Israel and Jordan in mind, but are keeping things flexible for now.

While they hope to continue indefinitely, Emma and Peter Tryon say they will continue to judge things based on their children’s needs and desires.

“We have to stay alert to their developments and needs, which change from day to day,” adds Peter Tryon. “But at this stage they seem to be doing really well.”

Now they have been traveling for a year while homeschooling their kids, both say it feels completely natural and they don’t regret it.

The Tryons say packing up their lives and going out with their kids is one of the best decisions they’ve made.

The prospect of packing up and traveling indefinitely with their kids was something Astrid Vinje and Clint Bush had often thought about.

But it wasn’t until the Seattle couple, married since 2009, attended a family travel conference in British Columbia and spoke to other parents who had done it themselves that they decided to go for it.

“That [the conference] was the beginning of the school year and by the end of the school year we had made a plan,” Vinje tells CNN Travel, explaining that both she and her husband had burned out and were concerned that they weren’t spending enough quality time with their children.

Their original plan was to go out full-time for three years with two of their children, (Bush has an older son from a previous relationship) Mira, now 12, and Julian, now nine.

When children in the Washington state Not legally required to attend school until they are eight years old, all the couple had to declare at the time was their intention to homeschool their daughter.

While Bush and Vinje aren’t trained teachers like the Tryons, they met while they were both working on an after-school program, and they also have nieces and nephews who are homeschooled, so they had some idea what to sign up for.

The family left in 2018 and then traveled across America, as well as Costa Rica, the UK, Spain, France, Italy, Vietnam, Singapore, the Philippines and Indonesia.

Bush, now a software engineer for a bank, was working full-time at the start of their journey, so much of the homeschooling fell on Vinje.

However, he started taking on a bigger role when Vinje, who runs their family blog, the wandering daughter, also going digital, which was an important shift for all of them.

“I think I felt a little alienated from what was happening with the kids,” Bush explains. “So it was nice once we got into the flow of things and I felt more involved in what they were doing from a learning perspective.”

Although their schedules varied depending on how much they were exercising at the time, Vinje says they usually spent about one to three hours a day learning.

“Some days we just do a museum visit,” Vinje explains. “Other days we have an hour of math, an hour of reading, an hour of writing practice and then language class.

“I really don’t think it takes children many hours to learn because they learn by observing the world.”

While both she and her husband were concerned about removing their children from the traditional school system, they feel they have benefited immensely from learning while traveling.

“I often feel that many topics are missed [in traditional school,] because they are so focused on following certain standards,” she explains. “History is a big one for me”

Vinje emphasizes that they try to teach their children about all the different groups that lived in the specific place they are in order to get ‘a more complete perspective’.

“In that sense, I feel like they… [the children] get a better education,” she adds.

The Bush-Vinje family traveled the world together for four years.

While Bush admits he was initially concerned that missing out on regular interactions with children their own age could negatively impact their social skills, he was pleased to see that this was not the case at all.

“Our kids are absolutely incredible now in different environments with other kids,” he says.

After four years of traveling – their trip was extended for another year due to the pandemic – they returned to the US this summer and are now adjusting to be back in one place.

“If it were up to my husband and I, I think we would just travel indefinitely,” Vinje says, before explaining that it was their son and daughter who were eager to return home.

Mira and Julian are going back to school in September, but Vinje says that depending on their needs, they may return to homeschooling later.

While likely to stay for now, Bush and Vinje hope they can make a similar trip in the future, provided the kids want to.

“We recognize that this experience is definitely a privilege and not something anyone can do,” said Vinje, who has written an ebook, “Hey kids, let’s go travel!,” to help other parents who are considering taking their children on an extended trip or gap year.

“But if you can do it, I think it’s very important.”