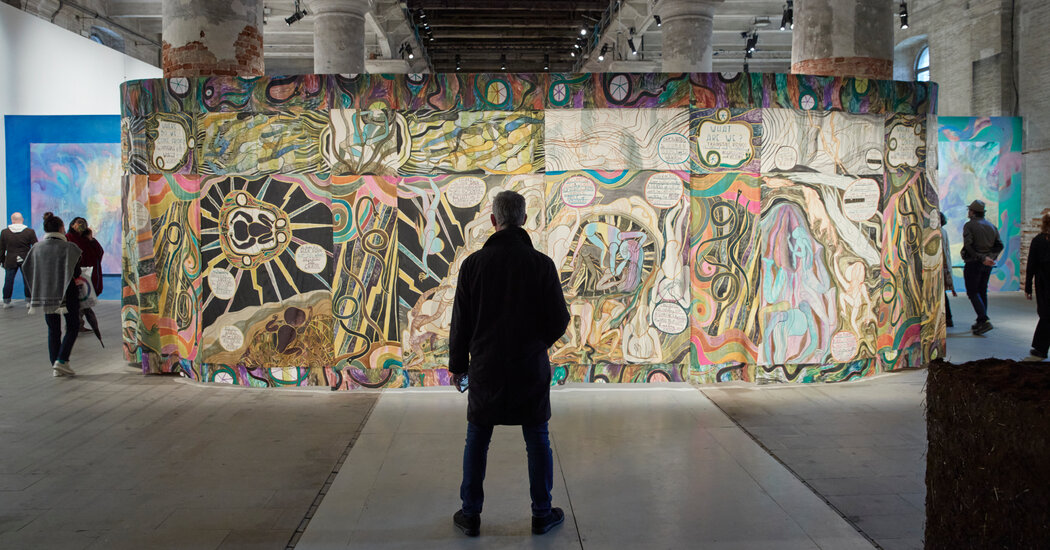 As the Biennale expands, locals ask, ‘Whose Venice is it?’

VENETI — Since its inception in 1895, the Venice Biennale has become one of the world’s foremost contemporary art venues, attracting hundreds of thousands of visitors to the city for its influential exhibitions and performances.

The event, which runs until November 27 this year, keeps Venice at the center of the world’s cultural conversation. More practically, it generates repeat, often overnight visitors that the city prefers over day trippers.

But some of Venice’s rapidly shrinking locals believe that the Biennale, aided by the current city government, is monopolizing space that can be used by locals to create a sustainable year-round cultural and economic life outside of tourism. .

The city’s concession to the Biennale last March of more space in the Arsenale — a former shipyard whose high, red-brick walls enclosed an industrial operation capable of producing one warship a day — has become embroiled in a complicated debate over the future of one of the city’s largest public properties, and by extension, the city itself.

“The Arsenale is much, much more than the Biennale,” said Giorgio Suppiej, secretary of the Forum for the Arsenale’s Future, a coalition of more than 60 local groups that has lobbied for a decade for greater accessibility to the site. to sue to block the March decision. (A court will hear the case later this month.) The group staged a protest in February for the city’s decision, attended by hundreds of Venetians, who held signs that read “Arsenale to the City” and “Arsenale Open and Alive All”. year.”

The Forum says Arsenale’s historic workshops should be dedicated to building boats, rowing groups and displaying traditional watercraft, all of which could create jobs while protecting a traditional Venetian way of life.

The Biennale is a “beautiful thing for Venice, let that be clear,” said Suppiej. But it “cannot be an asset that leaves out things that are even more important,” he added.

The Arsenale, whose 120 hectares occupy much of the historic center of Venice, is jointly owned by the City of Venice and the Italian Navy, which still maintains an active base there. The huge complex was virtually closed to the public until the Biennale began exhibiting there in 1980. Even now, locals can only enter much of the Arsenale after buying a Biennale ticket for 20.50 euros, or about $21.40. Much of the city’s property in the Arsenale is rarely open to the public and much of it stands unused.

The March decision – the result of an agreement between the city, the Ministry of Defense and the Ministry of Culture – paves the way for the Biennale to establish the International Center for Research on the Contemporary Arts, a space for artists and academics to collaborate with material from the institution’s archives. Under the plan, the Biennale will also build facilities for the expanding education wing, the Biennale Colleges, and invest millions to restore Arsenale’s fragile walls, buildings and canals.

The aim was “to repopulate this part of the city and bring the Arsenale to life 365 days a year,” said Roberto Cicutto, president of the Biennale, to make the Arsenale a place where not only art is displayed, but also created. He added that the new center would bring long-term visitors and permanent jobs, although it was too early to say how many.

While the March agreement guarantees ticket-free access to part of the Arsenale all year round, the Forum and its supporters say that is not enough. They were also outraged by the city’s decision to transfer a number of waterfront buildings on the property to the Navy as part of the deal, as no guarantees were given that those buildings would be made accessible to the general public. The Ministry of Defense declined to comment.

Cicutto said the debate over Arsenale’s future had more to do with the city’s management of the complex than the involvement of the Biennale. The Biennale’s new center would occupy buildings that would be unusable unless renovated, he added. “We restore things that have been destroyed,” he said. “It would be a crime not to take advantage and make this place available to the world.”

The new center will ultimately be just a small part of the Venice Biennale presence, which now extends far beyond its original venue in the Giardini della Biennale, where many countries showcase their national pavilions. Official side events, as well as independently organized exhibitions designed to coincide with the Biennale, can be found in even the farthest corners of the city.

“The Biennale eats everything up,” said Marco Gasparinetti, a citizen’s rights campaigner on Venice’s city council. Craftsmen struggled to find affordable workshops, as landlords prefer to rent the ground floor space to the Biennale, he added. “Renting to the Biennale, even for a few months or a few weeks, brings in absolutely incredible amounts,” he said.

While the Biennale brings hundreds of jobs to Venice, many are low-paying seasonal positions, Gasparinetti said. Despite its high cultural bona fides, the Biennale contributes to a growing awareness among some residents that Venice “is not for us, but for others,” he added.

Donatella Toso, 67, a retired schoolteacher living in the Castello district, near the Arsenale, said she enjoyed attending the Biennale and was “proud that my city is the seat of such an important cultural event.” But as she watched her neighborhood change, she added, she couldn’t help but see the Biennale as “part of a dynamic of expropriation that has impoverished the city.” Rising rents pushed residents out, she said, and more spaces in the neighborhood were devoted to Biennale events.

“For me, the Biennale is enchanting,” said Leo James Smith, 23, who runs a local nonprofit that focuses on urban regeneration in Venice. “There is a lot of activity from all over the world in Venice, and the Biennale is the artistic expression of that.” But, he said, he was increasingly aware that the Biennale is “using its enormous economic strength to occupy a lot of spaces that could perhaps be put to better use.”

Giuseppe Saccà, the leader of the largest opposition party in the city council, said the Biennale had made mistakes, but added that it would cost very little for the organization to build a better relationship with residents. He said he blamed a lack of imagination and strategic planning by city officials for Venice’s continued tourism dominance. But while politicians may struggle to formulate a vision, he said, the Biennale was “one of the few institutions in this city that has plans, raises money and operates on some level.”

“Every company has its social responsibility, and so does the Biennale,” says Saccà. But the city must ultimately ensure that the Biennale grows responsibly, he added, noting that the mayor of Venice sits on the Biennale’s governing council. And some problems, such as excessive rents and Venice’s dwindling population, are simply unsolvable, Saccà said. “You can’t ask the Biennale to do something that isn’t the Biennale.”

Jane McDonald on the 2 Specific Pairs of Shoes You Should Pack for a Cruise 'Trust me!'