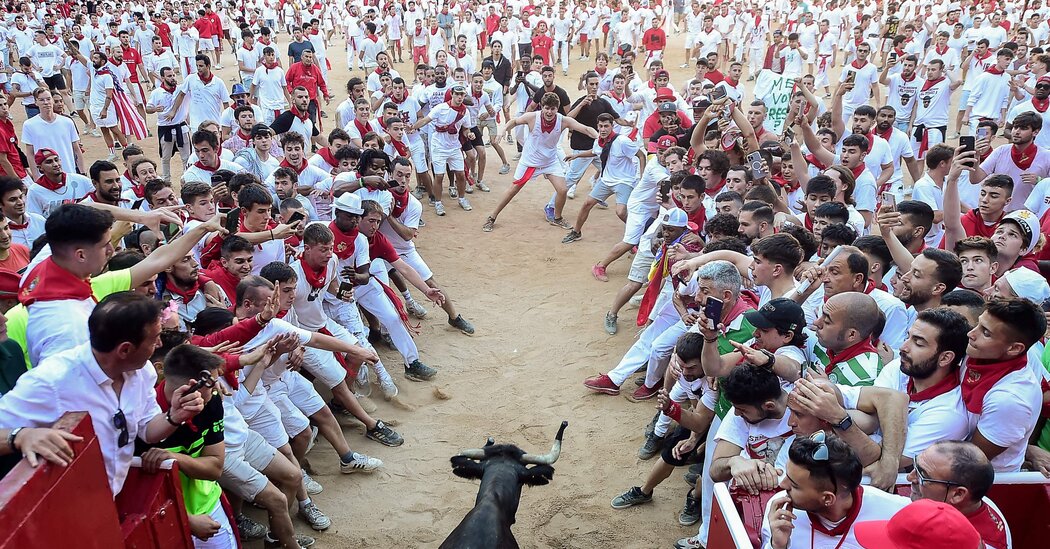 After a pandemic hiatus, bulls are running again in Pamplona

For more than a week at the height of summer, a sea of ​​people clad in red and white routinely crammed the narrow, cobbled streets of the northern Spanish city of Pamplona for the ceremonial bull run, a heart-pounding, chaotic race that sometimes ends in serious injury or even death.

Known as “encierro”, the races returned this year after a two-year hiatus due to the coronavirus pandemic. They are the most famous part of the San Fermín festival, which lasts through Thursday.

Every morning, six bulls charge at thousands of brave runners along a 800-meter street to the town’s bullring, where later in the day the animals are killed by professional bullfighters or toreros. The average duration of each race is less than four minutes.

The event is as dangerous as it seems. According to local authorities, five people, including one on Tuesday, have been impaled in six races so far this year. At least two dozen people have been treated for other injuries.

In 2019, the last time the races were held, eight people were impaled during bull runs and 35 others were treated for other injuries, city officials said. Since 1910, 16 people have died in bull runs in Pamplona. The last death occurred in 2009, when a man was stabbed in the neck.

The festival is named after a bishop who was beheaded in the third century, city officials said. In the Middle Ages, San Fermín was already celebrated with religious ceremonies and a meal for the poor of the city. Over the years, music, comedies and other elements were added to the festival, and in the 16th century the celebration was moved to July from October, coinciding with a trade fair and organized bullfights. The festival became even more popular in the 20th century with the development of transportation and the expansion of tourism.

The number of runners in a weekday bull run can be as high as 2,000, with almost double that during the weekend races, but the tradition is criticized by animal rights groups.

For the past 20 years, PETA and AnimaNaturalis, a Spanish animal rights organization, have protested against the running of the bulls. On the day before this year’s festival, dozens of protesters marched through the streets, some wear dinosaur costumes to indicate that the running of the bulls and the bullfights were remnants of a less enlightened era.

PETA co-founder Ingrid Newkirk said in a statement that Pamplona’s event was a “cruel, disgusting gore-fest” and called for it to be ended. “We have suggested that the city increase its revenues through other forms of entertainment, such as punching tomatoes or kicking a ball, and have even offered money to end bull torture,” Ms Newkirk said. In the past two years, PETA has offered the city almost 300,000 euros (about $300,000) to end the running of the bulls and subsequent bullfights.

Alberto Rojo Puebla, 34, a conductor from Alcalá de Henares, about 200 miles south of Pamplona, ​​traveled to the festival this year to soak up the culture, although he’s not a fan of bullfights.

“For me it was especially special because I was able to experience everything ‘inside’ by staying with people from the city,” he says. “You can see the traditions they have — the charanga music, the food served with vermouth — and understand them better.”

Greg Harris, a Toronto attorney, was drawn to Pamplona by Ernest Hemingway’s descriptions of the running of the bulls in his 1926 novel “The Sun Also Rises.”

Mr Harris, 58, said he woke up early Monday to join other runners. “There was a palpable nervousness in the crowd,” he said. “Everyone was just a little tense.”

Although he was not injured in the flight, he marveled at the speed of the animals. “In no time the bulls will be on you,” he said. “They were just so fast.”

Despite the fear he felt before his first run, Mr. Harris said he wanted to run again.

“The way I did the run today, I was happy with it,” he said. “Obviously, being the first runner, I just have to be happy that I’m safe at the end of the run. But I think I could do better by being even closer to the bulls and still be safe.”