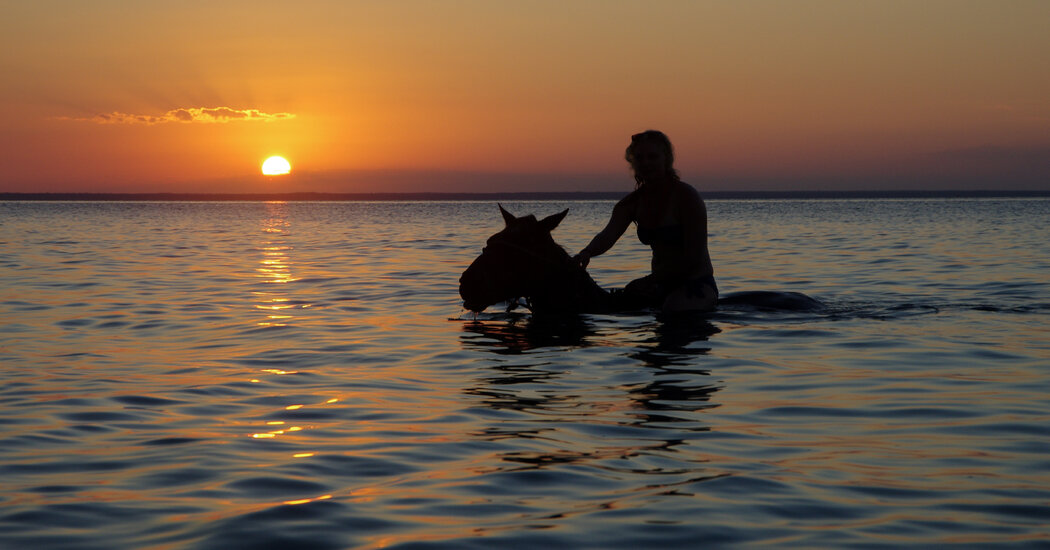 A Herd in Exile: Horseback Riding in Mozambique’s Bazaruto Archipelago

With a map in one hand and a cold beer in the other I sat alone at the bar of the Baobab Beach Backpackers Lodge in the coastal town of Vilankulo, overlooking the expansive sandbanks and vibrant turquoise waters that surround Mozambique’s Bazaruto Archipelago. I was planning to leave for Zimbabwe the next morning and I was talking to the bartender about the logistics of my trip. Then, suddenly, the headlights of a car lit up the bar, and I saw a familiar face approaching me. I had the feeling that my plans were about to change.

I had met Mandy Retzlaff a few days before; she and her husband, Pat, former Zimbabweans, are the founders of Mozambique Horse Safari, a family run safari company that I had the pleasure of driving in Vilankulo as a special treat for my birthday. My friend Alice and I had traveled some 200 miles from Tofo – a small coastal town known for its diving, snorkeling and whale shark sightings – for a ride with the company after hearing about their extraordinary story and the wonderful excursions that they offered.

On the morning of my birthday, Alice and I had enjoyed an exhilarating low tide ride along the palm tree lined beach at Vilankulo. Pat was our guide and his introductory words – “We will have to drive fast to reach the red dune before the tide comes in” – sounded like music to our ears.

Riding side by side on spirited and exceptionally well trained horses, we thundered across the white sand, pausing to give the horses a break before galloping up the steep red dune. From the top of the dune, a palette of bright blues stretched across the peeping sandbanks toward the five islands of the Bazaruto Archipelago. Traditional dhow boats dotted the seascape. We watched fishermen haul in their nets and local women carry their catch ashore.

A few days after our ride, while I was sitting at the bar, Mandy drove to the Baobab Lodge to ask if I was interested in helping run their horse program on nearby Benguerra Island for a few weeks due to an unexpected staff shortage . I immediately dropped my plans to travel to Zimbabwe and found myself on a boat bound for an island paradise.

About 13 kilometers from the mainland, Benguerra Island – the second largest island in the Bazaruto Archipelago – is a diving paradise famous for its white sand beaches and luxury resorts. Although their main herd of more than 40 horses is based in Vilankulo, Mozambique Horse Safari also has an outpost of six horses on Benguerra, serving the guests of the exclusive resorts.

During the weeks I spent on Benguerra Island, I got to know the horses in my care. Their history is recorded in Mandy’s Memoirs“One Hundred and Four Horses: A Memory of Farm and Family, Africa and Exile”, which tells the remarkable story of a farming family’s devotion to their animals – including their journey across Zimbabwe to Mozambique, with 104 rescued horses.

In 2001, Mandy and Pat received a letter informing them that they had to leave their Zimbabwe farm; it no longer belonged to them. As part of the controversial land reform policy, the family was among those forced to leave their homes. Determined not to abandon their beloved animals and agree to take in animals from other displaced farm owners, the Retzlaffs moved from place to place with an ever-growing herd, eventually reaching the border of Mozambique.

As the evictions continued, it became increasingly difficult to keep their horses in Zimbabwe, so the Retzlaffs decided to cross the border into Mozambique. “Because Mozambique opened up after a civil war and people wanted to invest in the land, it seemed like a good idea to move the herd there and start a new life,” explains Mandy. “We had no idea of ​​the difficulties we would face, but it was almost like freedom.”

After a long and challenging journey to Mozambique, the couple created a riding outfit to help pay for the upkeep of their exiled herd. In 2006, Pat, who comes from a long line of horse enthusiasts, took six of the horses to Vilankulo and started organizing beach rides – and so the horse safari was born.

The company took off when Cyclone Favio struck Vilankulo in February 2007, causing widespread destruction and bringing tourism to a halt. Three years later, in 2010, half of Mandy and Pat’s herd died after eating Crotalaria plants, which are deadly to horses and grown in abundance near the lakes where they graze the animals. The pandemic was another major setback.

Despite the challenges, Mozambique Horse Safari offers spectacular horseback riding adventures and attracts tourists and travelers eager to explore one of the world’s most beautiful coastal regions.

On Benguerra Island, I switched from tourist to hiking guide and spent my days leading drives along the island’s pristine beaches, wandering the varied landscapes and waterways with guests from all over the world. In the evenings I took the horses out into the sea to wallow and swim as the sun set, something they seemed to enjoy as much as I did.

I also became fond of a sweet but temperamental mare named Princess, who was rescued by the Retzlaffs after suffering a horrific injury from a gunshot wound through her withers, the highest part of a horse’s back. “It took years to heal her,” Mandy said.

The Retzlaffs’ devotion and affection for their horses resonated deeply with me and is a source of inspiration. “When you take on the responsibility of taking care of animals, there’s no turning back,” Mandy told me. “They rely on you for everything. Our horses were saved – and in the end they saved us.”

“They provided a living for a family of refugees,” she added. “Every day is a happy day surrounded by my horses.”

Claire Thomas is a British photographer and photojournalist who focuses on conflict, humanitarian and environmental crises and social issues. You can follow her work on Instagram and Twitter†