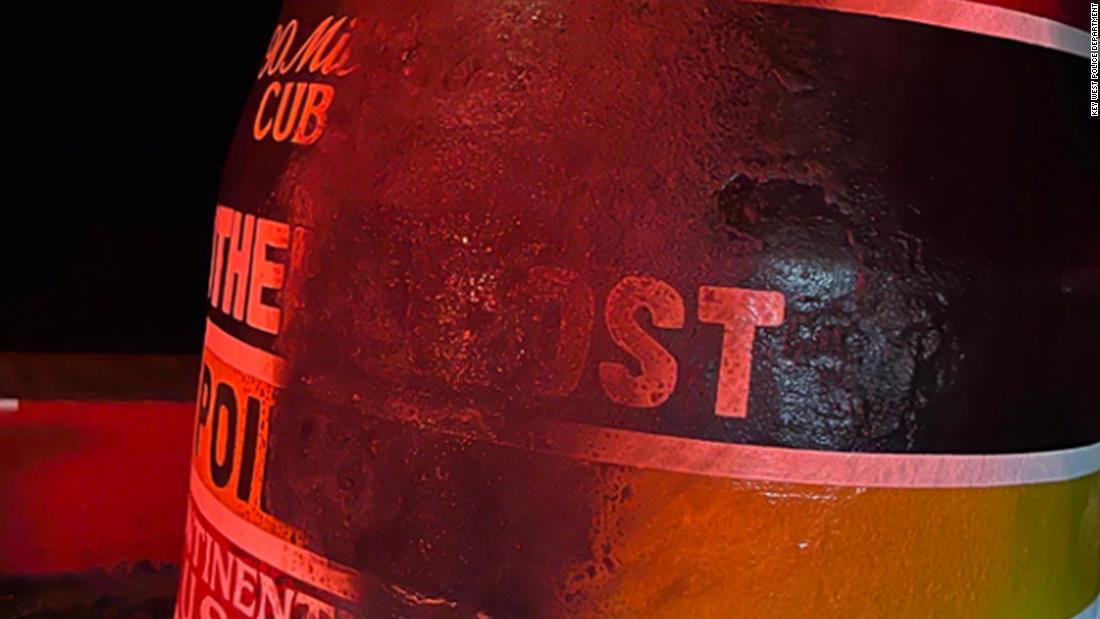 The anchored 20-ton concrete buoy in Key West sustained “extensive damage” after a Christmas tree was placed near it and lit on fire, according to Key West police. The fire left a black mark blazed across the brightly colored paint job that reads “Southernmost Point Continental U.S.A.”
“The Southernmost Point is one of the most iconic spots in the Florida Keys,” said Key West Mayor Teri Johnston in a news release last week. “People come from around the world in order to be photographed in front of this statue.”

News spread quickly in the tight-knit island community as images of the crime were shared on social media.

The suspects were wearing the same clothes as seen in the video from the buoy.

Starks pulled up bar receipts for one of the men, and police were able to use that information to identify a 22-year-old man from Florida and a 21-year-old man from Texas as the two men wanted for damaging the landmark.

“After a long night shift on one of the busiest nights of the year, when Cameron awoke to the news he immediately called work and alerted management that he was certain he had waited on these guys,” reads a Facebook post by Irish Kevin’s. “After combing through footage we were able to provide Key West PD with pictures of the men along with their names.”

Repairs to the buoy, which was installed in 1983, cost more than $5,000, according to the police report. Police were able to make contact with both men, who acknowledged what they did and said they had made a big mistake, according to the report. The two suspects face felony charges of criminal mischief with damages over $1,000.

“We are extremely proud of Cameron, The Key West Police Department, and anyone else who took part in naming these suspects,” reads the post by Irish Kevin’s. “We are also glad that those responsible for vandalizing a city landmark so near and dear to so many will have to take responsibility for their actions.”
Key West Public Works started repairing the landmark the same day and completed the restoration Thursday. For helping identify the suspects, Briody was rewarded with a case of rum provided by Key West First Legal Rum Distillery.