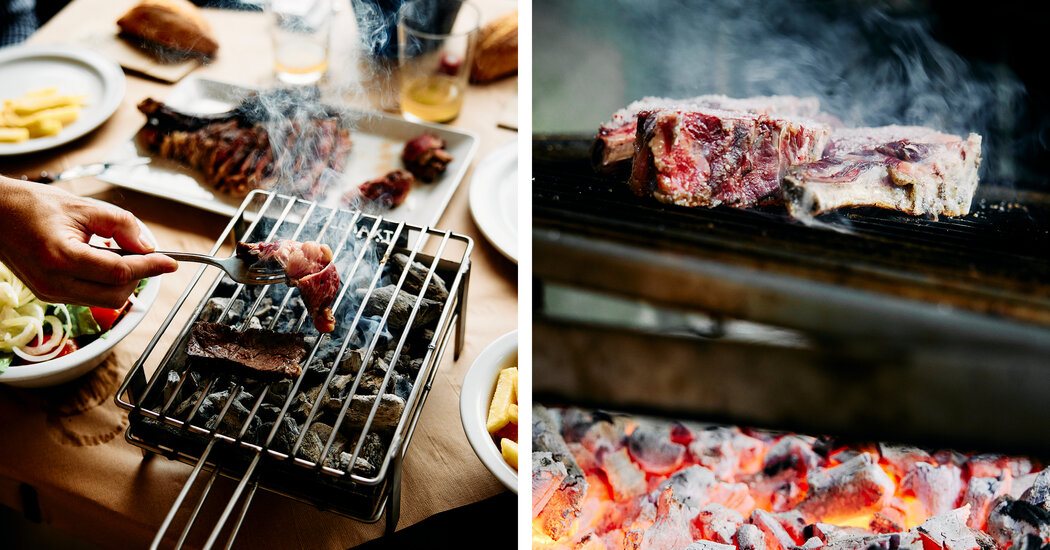 5 great restaurants to visit in the Basque Country

In the Basque Country, the pandemic has served as a reminder of the extent to which food is the fabric of local life. Good food is a priority in Spain’s northern autonomous community, and for some local chefs, it now seems to be even more so.

The region is an endless feast. Culinary destinations beckon beyond the many Michelin star restaurants. You’ll find pintxo bars strewn with waxy paper napkins, and people grazing on savory two-bite snacks, such as croquetas or Spanish tortilla, atop a slice of bread and stabbed with a toothpick; and sidrerías (cider bars) tucked into the lush green mountains, with patrons cutting into a forearm-sized fire-grilled steak while sipping fizzy natural cider.

“Our culture is based on food,” says Álvaro Garrido, chef and owner of the Michelin star Mina, a restaurant in the La Vieja neighborhood of Bilbao. “Geographically, we are very lucky,” he said, with access to fresh seafood from the Cantabrian Sea, high-quality produce from small, family-owned farms and meat and dairy from livestock raised on green pastures. The result is a strong culinary heritage that even the most edgy chefs consider sacred – and of course it attracts food worshipers from all over the world.

Garrido and his partner, Lara Martín, who runs Mina’s front-of-house, earned their first Michelin star in 2013 and have had many followers ever since. On rare days off, when Mr. Garrido is not in the kitchen with the Mina “warriors,” as he calls his staff, the native Bilbaino visits suppliers or enjoys a meal at a nearby restaurant prepared by one of his colleagues.

I first interviewed Mr Garrido in December 2019, to draw on his extensive restaurant knowledge and discover some of his favorite locations in the Basque Country. (In 2014 I worked as a kitchen intern at Mina for about six weeks.) Shortly afterwards, the catering industry came to a standstill due to the pandemic. Restaurants across Spain were forced to close by government mandate, some never reopened.

But some places on Mr. Garrido’s list managed to change their business quickly. Zarate, a Michelin-starred restaurant in Bilbao known for its pristine seafood, has converted part of its street-facing dining room into a seafood restaurant offering takeaway. Others waited for outdoor dining to be approved and doubled up on their patio service. Due to its largely extroverted, deeply food-oriented culture, local customers were eager to return.

Then there was that quintessentially Basque spirit of resilience, which helped restaurants navigate through some of the pandemic’s gloomiest moments – the people of the region are no strangers to persevering in the face of adversity. Amaia Garcia de Albizu, the manager of Arrea! and sister of chef-owner Edorta Lamo, told me, “When the crisis hit, it reminded us of our grandparents during the Spanish Civil War.” Aware of the hardships of their ancestors, they did their best to carry on and maintain a sense of gratitude.

Ultimately, all the restaurants on Mr. Garrido weathered the pandemic. The national trade association for tourism, Excelturpredicted in a January report that Spain’s gross domestic product could reach about 88 percent of its prepandemic levels by 2022 (135 billion euros, or about $138 billion) — that’s about 47 billion above 2021, although that’s still 19. billion euros lower than about 155 billion of 2019. With the return of tourism, the region has come back to life and the mood among many restaurant owners is cautiously optimistic.

Here, Mr. Garrido shares five restaurants that should be on your radar the next time you visit the Basque Country.

“Arrea! is in Kanpezu, a small town in the middle of the mountains,” said Mr. Garrido. The chef, Edorta Lamo, made his name at A Fuego Negro, the restaurant in San Sebastián, where he reinvented the classic pintxo. (Unfortunately, A Fuegro Nuegro is closed after 14 years during the pandemic.) For Arrea! Mr. Lamo returned to his family roots in Kanpezu (or Campezo in Spanish) to pioneer a gourmet style that can only be described as “mountain cuisine.”

“They cook with produce from the mountain – wild herbs and produce that the chef and his team collect themselves,” says Mr. Garrido. The Arrea! team also works with local honey, truffles, rare native plants and different types of game.

The different areas of the restaurant each offer their own dining style. You can sit at the bar with a wild boar burger or order venison “camouflaged” with root vegetables in the dining room. While guests must book at least 24 hours in advance to experience the nightly tasting menu (95 euros or $97), lunch may be the best bet to experience Mr. To experience Lamo at a relative bargain – the menu del dia will set you back just 20 euros, and a more extensive afternoon menu is available for 40.

In the small town of Amorebieta-Etxano, about 20 minutes outside of Bilbao, you’ll find one of the Basque Country’s best-kept secrets: Jauregibarria, the restaurant where chef Beñat Ormaetxea quietly promotes avant-garde Basque cuisine. “Beñat makes traditional plates with modern touches and works with local produce such as mushrooms, bacalao and ‘teardrop’ spring peas,” said Mr. Garrido. The latter are only available a few weeks a year.

In a restored farmhouse overlooking the surrounding botanical park of the same name, Jauregibarria, you will find a menu where classic Basque ingredients are juxtaposed with innovative techniques and creative flavors – such as roasted baby squid, or begihaundi, which translates as “big eyes in Euskera, the local language, with a crispy form of ink; or acorn-fed Iberian pork cheeks braised in Rioja red wine. Tasting menus start at 45 euros for five courses.

Chef Ormaetxea said the local clientele kept business going during the pandemic, even when tourism had all but stopped. “We are located near three major industrial hubs, so business people come to dine regularly,” he said, adding that the temporary shutdowns left people more hungry than ever to eat out. “It’s like when someone forbids something, you crave it even more.”

In the most recent Michelin Guide for Spain and Portugal, Palace was listed as a recommended restaurant. “Sooner or later they’ll give him a Michelin star,” Mr. Garrido said.

You probably know txakoli as the refreshing, barely fizzy, typical white wine from the Basque Country. It is also the name for rural houses where Basques traditionally gathered to eat a simple meal, such as eggs with chorizo, and share a jug of wine. Today, some restaurants still bear the “txakoli” designation, as a nod to the traditional comfort foods and homely hospitality they offer.

Nestled in the hills overlooking Bilbao, “just a few miles from where I grew up,” said Mr Garrido, Txakoli Simón is a tried and true local favourite. “Here you can eat simple and traditional dishes, such as fried eggs with red peppers, blood morcilla and excellent quality T-bone steak.” Their steak, or txuleta, comes from Galician cattle and is considered by some to be the best in Bilbao – no small feat for a region that prides itself on its grilling culture.

The general manager, Oscar García, told me that because Txakoli Simón is mainly an ‘asador’ or grill restaurant, it made no sense for them to use takeaway when restaurants were forced to close. (Txakoli Simón’s special steak, txuleta, costs 49 euros per person.) But once they opened, they were in high demand. Their customers, who according to Mr. García are about 85 percent from the region, took advantage of the restaurant’s spacious outdoor seating areas, surrounded by nature. Now, said Mr. García, things are back to normal.

“Their tasting menu will teach you about the Cantabrian Sea,” said Mr Garrido of the Michelin-starred Zarate in the heart of Bilbao. The chef, Sergio Ortiz de Zarate, started working with seafood in Lekeitio, a small fishing village on the Cantabrian coast where Zarate buys much of its menu today. Although you can order traditional Basque dishes like kokotxos? (the meaty lower part of the hake jaw) à la carte at his eponymous restaurant, the 11-plate tasting menu is a true undersea expedition. A meal can start with a few glistening anchovies, continue with a garlicky jumble of baby eels and end many courses later with a perfectly executed pil pil hake sauce, a regional favorite made from olive oil, garlic, and guindilla pepper.

While the pandemic-era seafood La Lonja de Zarate has since closed, the dining room is back in full swing. Whether you jump for a tasting menu (105 euros for 11 courses) or choose your own adventure (appetizers start at 25 euros), Chef Zarate insists on staying true to each carefully selected product and amplifying its essence rather than to mask.

“Zuberoa is one of the most famous restaurants in all of Euskadi,” said Mr Garrido, using the Euskera word for the Basque Country. In a 600-year-old Basque farmhouse in the village of Oiartzun, near San Sebastián, chef Hilario Arbelaitz prepares elegant versions of traditional Basque cuisine. The family-run restaurant, which has one Michelin star, had little trouble getting diners back in as pandemic restrictions eased. “Our restaurant is known for the number of years we have been in existence. We are a restaurant that has been passed down from generation to generation,” says pastry chef Jose Marí Arbelaitz.

“This is the restaurant where chefs come to enjoy emblematic local dishes, such as foie with chickpea cream and their mythical mashed potatoes,” says Mr. Garrido. He also notes that their game dishes, such as venison or roast pigeon with liver toast, are not to be missed. (Appetizers start at 38.50 euros. The nine-course tasting menu costs 159.50 euros.)